Been enjoying a couple days off work for the Thanksgiving holiday. Mostly, anyway. We had been at moms last weekend and I had thought it was a little cool in her room. A cold front was moving through and I kept upping the thermostat each time I came by. Tuesday, they called me to say the heater was out in my mom’s room and they were moving her to another vacant room. Jordyn and I helped move the bed, some chairs and some clothing to get her by, for a few days. It has all been confusing to her. I understand stuff happens, but her heat broke last year and she went without for several days.

Thanksgiving morning the nursing home called to say the housekeeper had found my mom on the floor. She was fine, no injuries, but I feel she was confused going between the new room and her old room. I am thankful she was okay.

I just hate anything that troubles my mother. 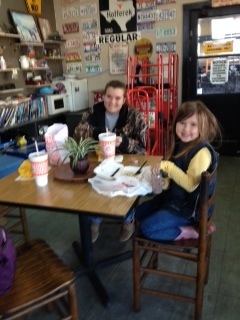 Lauren and Jo having breakfast

Part of our chores was to get the truck inspected. There is only one spot in town that does state inspections. So we anticipated a little wait on the last day of the month. We picked up some breakfast and headed to the gas station. The truck passed inspection and we had a great time. Building memories, one glamorous moment after another!

Thanksgiving was spent at Ally’s. Luke and she did a great job on dinner. All of us, had many things to be grateful for and Jordyn led us as we went around the table saying what they were. Family was high on all of our lists. Although Jordyn had Snowboy first on her list. Priorities!

The horses have been in their stalls pretty much non-stop for the last several cold, rainy days. Feather has completed her last show this year, so down time is fine, except for the 57 times a day we get to clean the stalls. We are trying to get Bruno started on his show career. However, while he used to load like a champ, I think he associates the trailer with going to the vet, and it is causing reluctance on his part to load now. Our trainer friend, Sarah, is coming tomorrow to work with us and Bruno to come to an understanding about loading in the trailer. If we get over that hurdle, Bruno will be headed to a lesson Sunday. Wow, I bet that will be something to see! Bruno, in a new place after being in his stall for two weeks. I vote that Dev rides him first!

Hope your holiday was warm and happy! Thanks! For riding along and being a part of our journey.

Snowboy getting out for a little break

I returned to my Colorado homeland amongst the worst storms and flooding in years. It seemed like a sign. I was looking forward to the fall splendor in the mountains and what I can see with the limited visibility is more like another Houston storm. Streets are blockaded, the entire county of Boulder is just “closed”.

I have not been here in over a year since I moved my mom back to Texas with me. I have been lucky enough to see Amber and her family several times but I have not been here. Lexi and Riley are both at the ages where they change a lot-two and four, respectively. Also, one of my last trips here, the family wolfhound suffered a horrific injury and had to be put to sleep. I had seen pictures of my new grand dog, Nellie, a female Irish wolfhound but had not met her.

Immediately, as I entered their home I was greeted by this huge, beautiful girl. I had owned a male wolfhound as had Amber, but this was our first girl. She was a wee bit shy. But she was huge! At least as big as either of our previous males, she measures almost seven feet (seriously!) from her nose to the tip of her tail. I don’t think she is done growing. 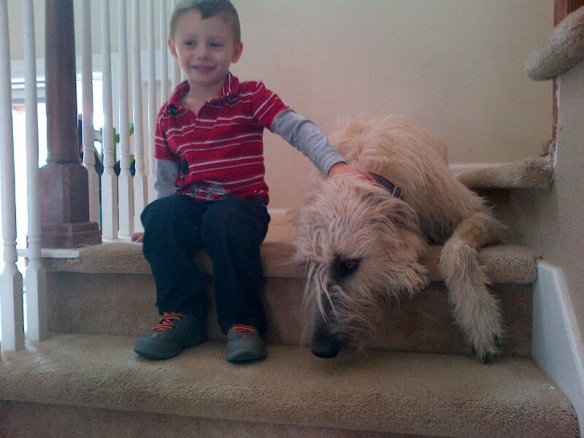 She also has a sweet, calm, loving demeanor. No matter if the kids were crawling over her or rolling along on our rain soaked walk, she was a champ. I saw a year’s worth of photos of the dog! It was wonderful.

The sun is starting to peek through, Lexi, Amber and I have all had pedicures, and I am looking forward to a couple of nice days with my Colorado family.

with my grand dogs Bailey and Nellie 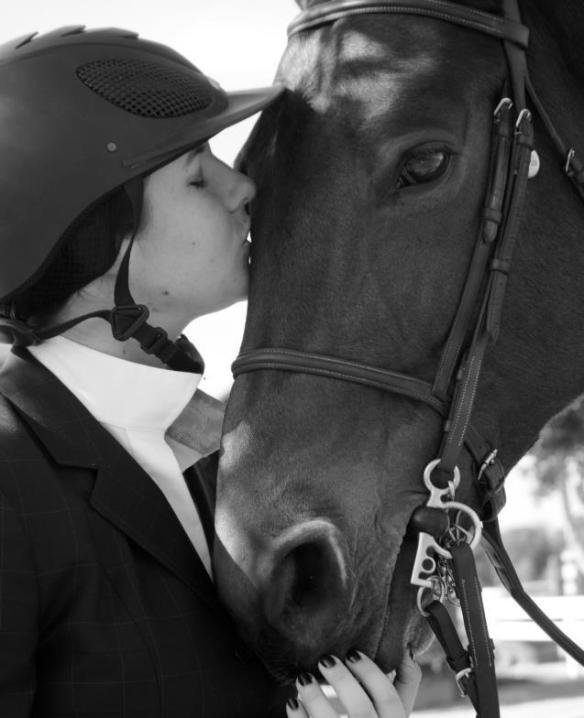 I want to celebrate some goals set and reached by a couple of my favorite people. Goals by definition should be attainable but require a stretch, a reach out of the norm to allow for them to come to pass. If a goal is simple, it does not mean anything once you reach it.

I have talked before and sung the praises of Lauren’s and my friend Caitlyn.  She is the one that as a youngster struggled to find her place in the world, struggled to make the world make sense, but once she started riding, it gave her motivation to try harder with everything else in her life.  My second goal achiever has much the same starting story, but we will get to that.

Caitlyn qualified for the top equestrian national finals this year in a process that requires skill, stamina, determination and seemingly being in multiple places at the same time, all while mounted on a spectacular bay horse and jumping jumps.

Caitlyn is a senior this year and has only the regret that she didn’t get to do the national finals sooner,  only that she wished she had tried sooner and harder to reach her goals.  Not a bad regret to have.  Who of us, don’t regret the passing of time and opportunities, but at least Caitlyn got to make the run at nationals one final, glorious year.  And it will pay off for her.  While it is still unclear exactly where, at what school, Caitlyn will make her NCAA debut, I am certain that she will.  She has talked to a few schools, one in particular that has already told her that they want her on their team, and who knows who else may come along and ask her to the big NCAA Collegiate Equestrian dance.  She will reach her goal (Lord willing) of being on a college equestrian team.

So, again I say Bravo, Caitlyn!  Way to ride and way to reach your goal.  I also know Cate has a few more big things on her list of goals like riding a Grand Prix.  It is inspiring and exhilarating to watch this young woman stretch her limits and reach the big stars.

Luke, proud with his family- wife Ally and daughters Jordyn and Kendyll  Photo courtesy of Memories by Elvia.

My daughter Ally was in college, it was Christmas time, and she and her new boyfriend (of just a couple of months) sat me down to tell me they were having a baby.  Not the way you dream for your daughter’s life to unfold.  I was devastated that night for the loss of Ally’s dreams (in completing school), my fear that she like I would be a single mom and mostly because neither Ally or Luke had any idea what they were getting in to with having a baby.

Their plan was to have the baby and then see if their love was still strong enough to support a marriage.  Turned out to be a good plan.  Jordyn was born in 2007.  They were married in 2009 and had baby Kendyll this year.

Luke is five years older than Ally.  He had an entry-level job with a big utility company.  He had never really had to work too hard at anything.  He got by.  Luke decided to make some changes in his life for family and for himself.  He put some goals on paper and committed himself to completing them.

I watched as he progressed up the line at his job.  He was accepted into the advanced training program.  He committed to it and completed the physically and mentally difficult course with the best of his group.  Luke set some new goals.  He and Ally bought a great house after saving money sharing houses and apartments with other families.  Luke made some lifestyle changes as well.  He knew with his new responsibilities and family he had to run the straight and narrow.  And he has.

This year-2012-he set his own goal for how hard he would push himself and how hard he would work-to meet a monetary goal that was WAY out of the reach of the young man who sat across from me at Christmas six years ago.

Certainly, Ally has supported the goals of this man who is her husband in caring for the family and being alone more times than she would have liked but knowing that her family would reap benefits from the time her husband was working.  Most of this year has been spent with Luke working nights and missing out on family dinners and the lively evenings with his two adorable daughters.  It is been a hard year.

Tonight we surprised Luke at a local steakhouse to celebrate him bursting past his annual goal with some of 2012 still left to go.  He made a goal to support his family, he put a number to that goal and he worked literally sometimes night and day to achieve it.  I did not know the man who would be my first grand baby’s father would ever even be my daughter’s husband, much less that I would grow to love and respect him.  I applaud his goal setting, his hard work and his love for his family.

To Caitlyn and Luke, keep setting the goals, keep reaching high and thank you for letting me be a part of your journey.