It has been almost two months since I fell and broke my ribs. Then I got pneumonia from not breathing deeply enough (you get reluctant to do that with broken ribs).  I was recovering when Amber and the kids came to town.

Then I was down with a whole new bug and the pneumonia was back, now in both lungs. Since Christmas my chest has been like a beacon of pain radiating in my rib cage.

The doc broke out the big guns this time putting me on breathing treatments, steriods and miscellaneous other drugs. The steriods scared me.

Prior to moving south, first to Florida and then to Texas, I had pneumonia for the first time and aquired adult onset asthma. I had bad lung problems, in fact, it was at the doctor’s recommendation that we first moved southbound.

I was treated with a lot of steroids. They made my family fearful as I always got wild eyed and more than a little bit agitated. They were NOT a good drug for me to be on and I have successfully avoided them for many, many years.

I will never forget taking seven year-old Ally to a new hunter/jumper barn in Florida to ride. It was a pretty swank barn and I was impressed with the horses and trainer. As he walked us down the aisle way pointing out the different horses we were startled by a horse suddenly charging to the stall front with his teeth barred. He spun and kicked out at the stall door.

The trainer apologized for the horse and told us he was on this medication called steriods and it made him act crazy. Calm as could be, little Ally replied, “oh, I know how that is. My mom does the same thing!”

From the mouths of babes. Anyway, fortunately while I have had some minor side effects mostly life on steriods this time is just helping me get better.

While I have been out of town for five days now,  the steroid girl is back in town. Watch out everyone! I may charge at any time.  Mostly I just want to get better.

As always, Thanks for riding along! 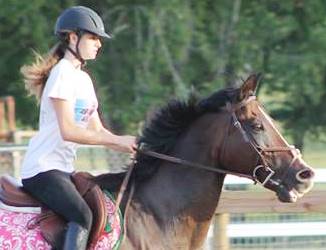 For awhile, there was a popular poster that said that everything a person needed to learn they should have learned in kindergarten.  It actually made a lot of sense.  And I posted a blog from another mother about how her daughter has learned an infinite amount from having, showing and being responsible for horses.

This is right along those same lines, dreamed up by me in those early hours before dawn when I just don’t seem to sleep well.  See what happens, you get stuck with my ramblings.

This is my analogy- everything we need to learn to drive a car we learn riding and showing hunters and jumpers (probably other disciplines apply but I am going to stick with what I know best). Alex, whom I have known since she was maybe six or seven, got her license recently.  I started thinking about the similarities between her equestrian experiences and her driving a car.  This is what I came up with:

I could go on here, but you get the point.  I acknowledge and support practice of both riding and driving.  But I also think Alex had a leg-up (pun intended) on her non-riding sister and friends.

Looking forward to a great weekend ahead with Amber and kids here from Denver.  Be on the lookout for fun times and great pictures.  And thanks for riding along.

Lauren has finally returned from her trip to The exotic and yet achingly familiar place of her birth in Florida.  Evidenced by her boots left lying on my kitchen counter her first night home, the farrows of her boot’s sole lined with fine, white Florida sand, she walked (and rode) many miles during her stay at the Wellington Equestrian Festival (WEF).

And we have missed her.  As much as Ally stepped up to perform an outstanding job on everything at the barn and the farm, we were all glad to know Lauren was home.  Ally was in many was a better manager and keeper of my clan than Lauren but in the way a new, eager (not yet exhausted and broken) employee steps in at the holidays to work retail. I know we will miss the little extas that Ally provided us with while she was our barn manager.

From Ally’s perspective, the whole event climaxed on her last day to cover Lauren with an extreme bloody horse injury, and Ally was eager to hand the muck rake back to her sister.  But I also feel that Ally learned a few things in this process.

Lauren, likewise, learned a bit about the real lives of top equestrians.  Through her days circulating through Grand Prix Village (on an actual imported Grand Prix horse) or working as the trainer’s aide, she learned immense amounts about hard work.  And not just her work either.  The riders she saw had worked years and years, lifetimes in the saddle, to be as good as they were.  She learned there were no short-cuts to fame. 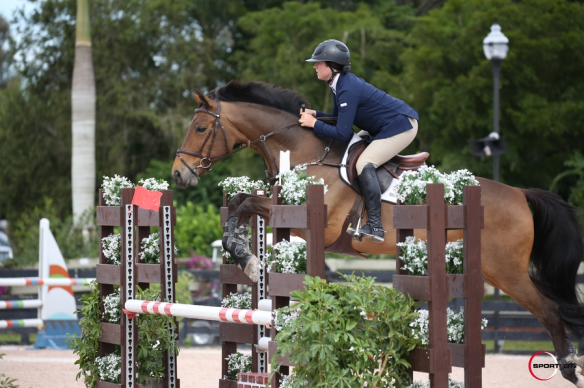 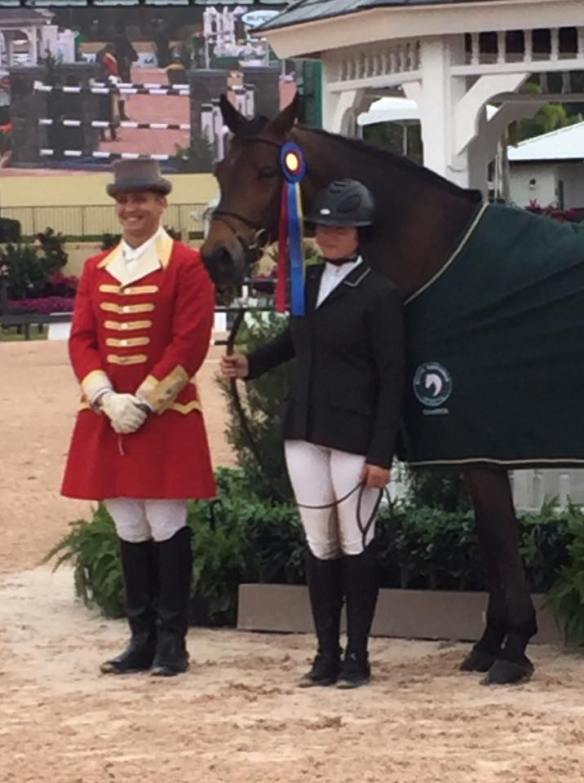 You all have read about Lauren’s friend Caitlyn.  You can search this blog for stories of Caitlyn’s many horse shows (Harrisburg, Washington Invitational, Maclay rounds, West Coast Talent Search) and hundreds of rides right here in Texas. Lauren is a couple years older than Cate but Cate has spent way more time in the saddle and at the big shows perfecting her art than Lauren has.  In all my years in the horse industry, while I have known many to ride at WEF, I have never had a real relationship with anyone who won at WEF. Like, I have never really known them-they were a top rider that I had heard about in the media.

This is exactly what Caitlyn and her horse Ky did!  I was thrilled to hear of them winning a class-how exciting is that?  But to come back and place high enough to win the whole division and be GRAND CHAMPION AT WEF, well, that was quite the way to end the show.

A ride with all the other grand champions on Sunday, in the International Ring, was the icing on the cake.  To ride in the arena where so many greats of sport had ridden before her was unimaginable thrill.

On a side note for those of you that like the star factor, Mary Kate Olson (yes, Full House Mary Kate) rode against Caitlyn in her division.  She rode not one horse, but four of the best horses that money could buy, but Caitlyn was there to win and had the experience to do so.

Finally, back home with Maui Jim and friends, I told Lauren how good he had been.  No eating FitBits or chewing shoes.  I wasn’t missing my glasses either.  I thought we had finally passed over puppyhood and he was getting to be an adult.

Then I got this text:

We will let you know how the power of God is effecting Maui.

As always, thanks for riding along!