Fast times at the Farm with everything happening at once.   Last week Mia rejoined us from Malaysia as she did last summer.  She will be here for several weeks as a working student (Lauren’s slave) and Lauren will return to Malaysia with Mia and the tables will turn.

We got things off to a big start with the surprise 16th Birthday for our boarder Isabel. Pink twinkling lights, pink streamers, pink balloons and pink cake helped herald the  event.  I think it was even a true surprise.

The first week of camp went off grandly culminating this weekend in Olympian Bernie Traurig’s riding clinic.  I have gone on and on about Bernie before so you can search for that story but it was great to have an audience with a United States Equestrian Federation Team member who has represented all three disciplines in the Olympics, Dressage, Eventing and the Grand Prix Jumpers.

All three girls, Lauren, Isabel and Mia had some concerns on the first day.  Isabel was riding a converted barrel horse she got from my great friend Sarah Sumrall.  Sarah’s horses are top-notch in the manners department but usually originally suited to more a western saddle than English.  This would be the first time for Isabel to take Dex anywhere nearing the importance of this event.  This horse just started dressage and jumping a few short months ago.

Well, Dex got in a little trouble with Bernie. He was tossing his head and not getting down the jump lines properly.  So Olympian Bernie just hopped on!  What a thrill. 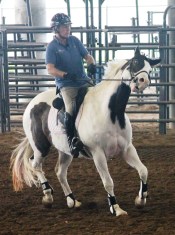 The last time this horse had been in this particular arena he had been running barrels, now he was being tutored by an Olympian.  Sarah has provided a lot of great project horses for many of us.  Oh Sarah, the places your horses go-

I could write a series of children’s books about Sarah’s horse and the adventures they have.

Anyway, back at the clinic…

Mia was on Mickey for the first time ever to participate in  this  jumping clinic-talk about jumping in with both feet.  We have been bringing Mickey along from his lameness issues and with new shoes and lots of support he was ready to go.  Actually, he was a perfect gentleman.  I had put on the form for Bernie that Mia would need to work on Mickey rushing to the jump.  Never happened.  Not once.  He went around with perfect striding and super cute jumping.  He looked like a hunter/dressage horse.  Amazing what happens when a horse has some time off and is not in pain.  Once Mia settled in, she and Mickey had a great clinic.  Bernie told her she was a natural horsewoman with innate talent.  Now, that is pretty sweet.

Lauren and Feather were in a ring away from home for one of the first times since January.  It showed as they struggled a little to find their striding and control their speed.  But again by the end of the clinic, Bernie told Lauren there are two types of riders, those that ride well at home and fall apart in a show.  And those that walk in the show ring and everything becomes magical.  When Bernie told the group it was now a full course and they were being judged, the pair turned on the magic, hit all their correct strides and looked great.  I would rather have the show magic horse than the home magic horse, at least for Lauren.

Kenna (two Ns, as opposed to my dog, Kena, one N) joined us from Oklahoma on Sunday evening along with my granddaughter Jordyn.  This week Allyson and Isabel are day camping and Kenna, Jordyn and Mia are over-nighting it with us for a couple of weeks.  WOW.  Not a dull moment here. 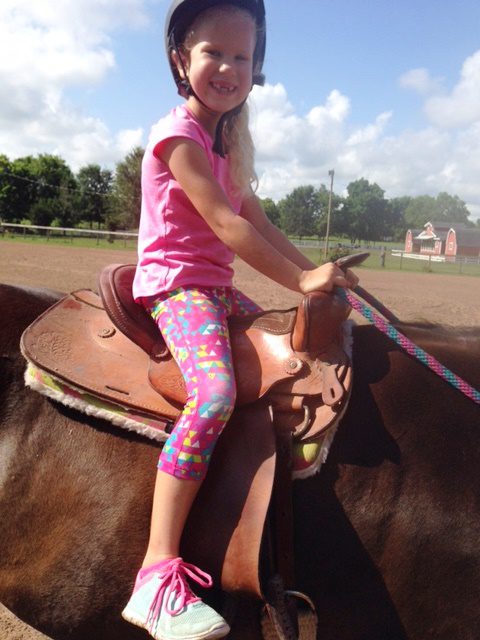 Micenzie was nothing but smiles!

Isabel teaching Madison and Micenzie how to brush the horse. 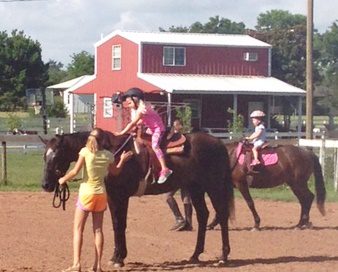 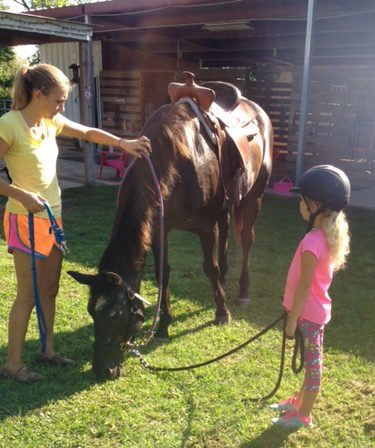 Mia spending some time with Zie.

Today was teach the next generation day.  These older girls helped three young riders, a five year old and two-three year-olds, take their first lessons.  The young riders will come twice a week for the next few weeks as well.  They were super excited and super cute.

Finally, my Sims colt is one month old today.  Hard to believe!  He got some special time out (Or I did) to play in the paddock. What a doll! 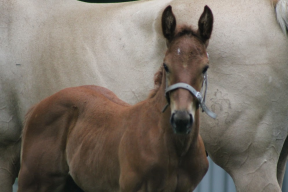 Meeting his aunt Nova and showing off his number 1 mark on his head.

And line up with your numbers to the judge! Jordyn executed this perfectly.

Jordyn has been in the show ring several times but always as a passenger, never as the driver.  This time is was all on Jordyn and she had practiced and practiced to get it right.  But like all things the first time around, the unknown sneaks up and creates ripples in your tummy and angst in your heart.

Jordyn has some Obsessive Compulsive Disorder like her mom, aunt, granny and grandpa.  We all like things to be ordered and to be right.  We are uncomfortable when things don’t go on schedule or when we think it is time. it is difficult to wait.  A horse show is not a good place for anxiety or OCD because really little is in your control.  Preparing, working and much saddle time certainly helps but in the end it is you alone in a new ring where all the things you practiced seem so different.

How did she do?  GREAT!  How did she think she did-well, I would say miserable failure would be one description.  We all worked on expectations with her ahead of the show.  Telling her if she got a ribbon, that would be great.  And she did.  She got three THIRD places but it was the fifth place in the last class that sent her over the edge.  I think if she had even won the last class it would have reduced her to tears as she had so much built up tension, just being done caused the tears to flow. 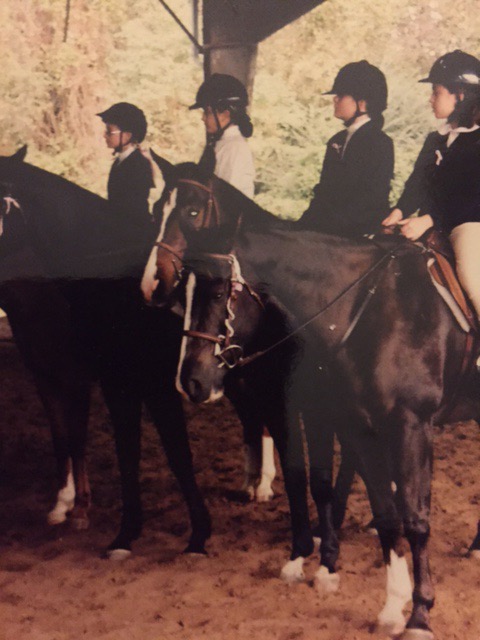 So, let’s go back about twelve years.  Lauren had just gotten Mickey and had been preparing for her first show.  While she was new to riding English she had more actual riding experience under her belt (she could easily canter my big, fast quarter horse, Kid and Jordyn has not cantered on purpose yet) so she started off on her young five-year old rescue horse Mickey in the walk trot division.  In those days, we had yet to gain all the proper stuff like saddles that were made well, boots and jackets that fit and Lauren did not have that top-notch look to her attire that Jordyn did going in the ring this weekend.

We even had kids come up to us and ask if the horse Lauren was riding was in fact Mickey.  Apparently he had thrown a number of children and the kids could not believe she was taking a chance riding him.

The show itself was at Bridle Creek and it was a benefit for Holly Davitt (now Muehle) who had breast cancer.  Holly doesn’t remember much about that show.  I happened to see her at the show this weekend and stopped for a photo together.  She has successfully made 12 years Cancer free.  I was just older.  Still it was pretty cool to see my granddaughter follow so closely in the shoes of her Aunt Lauren.

Lauren’s first show was a benefit for Holly. Here we are together at the show this weekend, 12 years later.

I am so proud of Jordyn and so proud of Mickey.  Mickey was at Zone Finals jumping over three feet a couple of weeks ago and this week he is trotting around like a champ for my granddaughter.

I wish the pictures showed more happiness on my baby’s face.  After all that is why you show.  And Jordyn could not find one equestrian to talk to that did not have a missed fence or perfect day. Things do not go exactly they way we plan in the ring.  We learn about failure and trying again.  Those are important lessons.

For me it was the culmination of many dreams.  That she would become a secure enough rider to go into the ring on her own and execute all the judge asked her to do.  Also big shout out to our Judge Lisa Richardson who did a great job placing the kids as was their due.

I am sad we did not get pictures of Jo and Mick with her beautiful first ribbons but here are some photos below that show how professional she looked and how well they did!!

Lauren walking from the warm up ring as Jordyn handled Mickey all on her own.

Love this silhouette of their profiles.

What a great shot of the two of them! 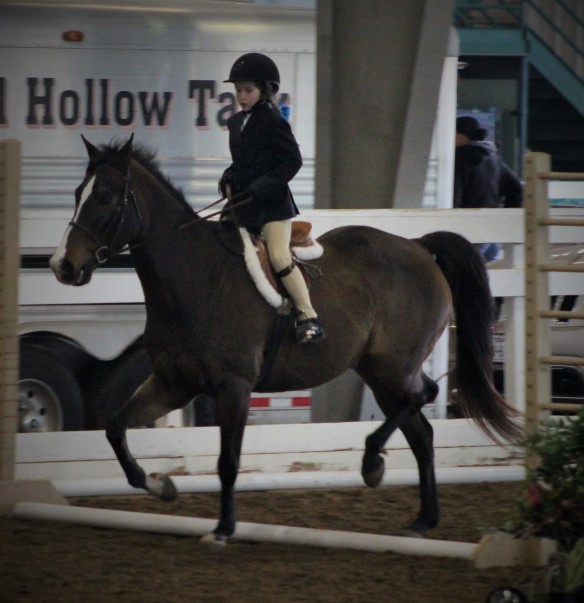 Reins a little too long-starting to get in a little trouble in her last class.  But Mickey was not touching that pole!

Thank you for the great day Jordyn!  I know I will look back many times and tell people all about your first horse show!

Thanks for riding along!