My mother with my daughters Lauren, Amber, and Ally with me behind them

At this time of Lent, in many ways more than others, I remember and think about my mother. As kids we were raised in the Episcopal church. For those of you not familiar with this- it is a great deal like Catholicism. Maybe without the guilt, as they sometimes joke.

My mother, especially in her later years, was a devout churchgoer.And the  Lenten season was always one of her favorites. Maybe because spring after a long Colorado or Chicago winter always was more impactful.  Watching the daffodils come up through the snow was always a welcome sight.
As the years advanced, she tried very hard to get to church as often as she could. Be at a Friday service for stations of the cross or for one more morning Eucharist on Tuesdays.

I took her to church a few times with me after she came to Texas for her last years. But I think like most things at that point it was way too overwhelming and frightening for her to realize even where she was.

Today, an ﻿old high school friend, talked about trying to get her mother into an assisted living-type place that had an affiliation with the Catholic Church. There her mother could have her daily Eucharist and enjoy a spiritual life.

The Catholic priest did come to my mother’s place, but she was not Catholic. Why I never thought to get the Episcopal priest or one of the lay ministers to come and give her the Eucharist is beyond me. How she would’ve enjoyed that!
This Lenten introspective has me thinking about that the things that I have put into the far reaches of my mind. I know we all do the best we can but I am driven to try to do better.
So today I am just going to pay tribute to my mom and let her know I miss her so much. 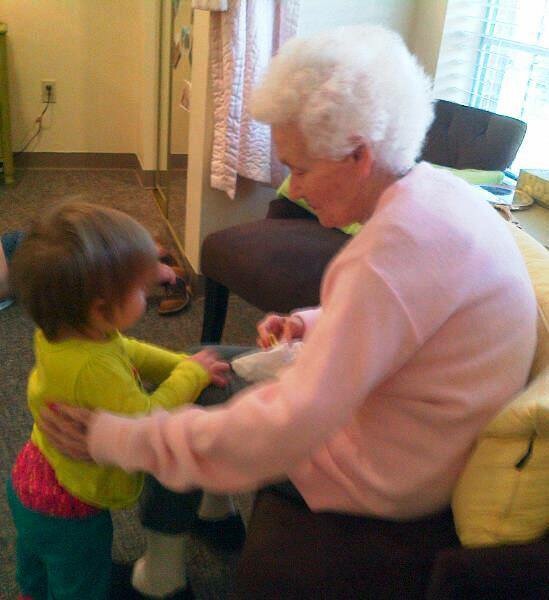 My momma with my granddaughter Kendyll

Thanks for riding along.