I feel like summertime has just began but based upon the photos that are rising up on Facebook and in my own messages, it is clearly the start of yet another new school year.  In Texas, there is no marked change of weather to indicate time to return to school has arrived.  I remember late August days in Chicago when the wind would pick up and the temperatures drop forcing us out of the community pool and out shopping for sweaters.

Shortly, in much of the US, there will be brilliant leaves falling from trees and the first frost descending on the land.  Last year, we did not have a frost.  Period.  No temperatures below 32 degrees.  Usually the true summertime weather hangs around until Halloween or so.

It used to be in Florida I would pride myself on turning off the air conditioning by November first and not turning it back on until May first. We were close to the ocean and got that ocean breeze but here I am lucky to turn off the air for Christmas Day. I am sure the warm weather year around is a blessing. But it is one I struggle with by the start of the new school year.  I mean really how many days of changing your clothes three times because they are soaking wet can you take (and for those of you who have not lived in the humid south, we are not talking about getting caught in a rain storm although that is always a possibility as well).

We were able to let all the girls out together for the first time-and everyone got along!! 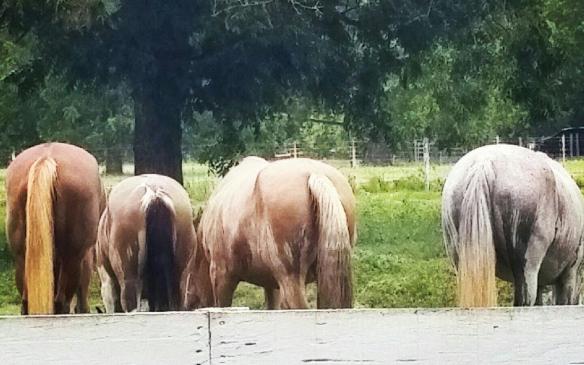 The mares grazing on the late summer grass and subsequently being rained upon.

But as much as I complain, the cold is harder on me than heat, so I trudge along.  In spite of the weather, which included several strong thunderstorms this week, life at the barn continues.  This week saw Libby with her healing broken hand climb back aboard Cody for the first time.  She also had a brand new saddle.  One specially made to fit Cody and keep Libby in the saddle and off the ground.  After so much pain, it was delightful to see the joy on her face as she took an inaugural spin around the arena.

Dev was back for the first time in many weeks as well, healing from his broken orbital and subsequent surgery.  I haven’t sat back in the shade of the deep porch and watched lessons for some time.  The arena was perfect and horses spot on.

Jordyn made some progress on her riding as well.  It has always been one step forward and two steps back for my first granddaughter.  It has taken some urging, begging, threats and praise but Jordayn finally trotted off through a series of cavellettis and some Xes.  This is a precursor to trotting over jumps and a  transition she needs to make to move on. 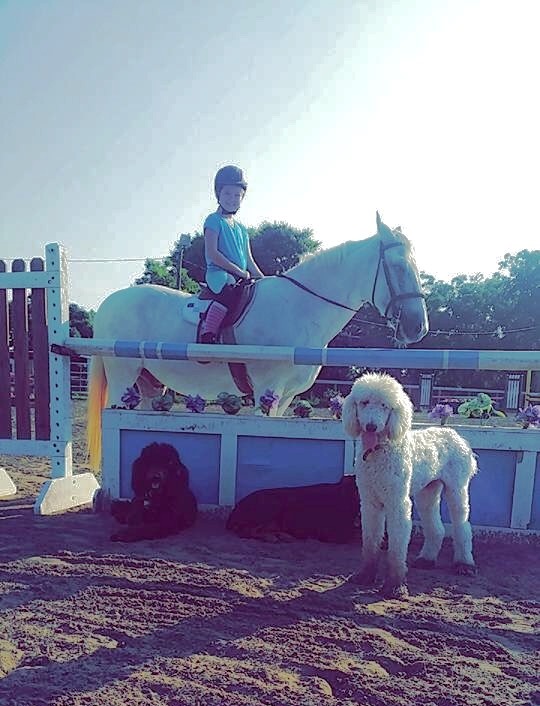 Jo and Snow with Kona, Kena and Maui-barn dogs extraordinaire!  Look at those dirty, giant paws.

Jordyn headed off to third grade this week and remarkably has the same teacher as last year.  While second grade at the new public school brought tremendous anxiety to Jordyn, this year’s first day went smoothly and easily.

Riley entered first grade this year and is a top student.  He looks pretty GQ in this picture from “Meet the Teachers” night.

Summertime heat may be here to stay for a while but fall will soon begin again.  As always thanks for riding along!

Lauren and I send our heartfelt sympathies and prayers to the Figenshaw family as they attempt to grasp with the new realities of their lives.  In a horrible instant, while taking daughter Meg (whom we have known since Whipple Tree days) off to college, Meg and her father Paul, were hit head on.  Paul did not survive the accident.  Meg has a broken neck, collar-bone, ribs, arm and pelvis.  Having lost my sister in a head on wreck, I know the anguish of loss.

Lord make your face to shine upon and give them strength to carry on.

A moment can change everything.  We are so deeply sorry for your loss.

I had a last-minute opportunity to head off to Colorado with my granddaughter Jordyn to spend the weekend celebrating the birthdays of my Denver grandchildren, Riley and Lexi.

I am a Denver native and a lover of the Rockies. While I have not lived in Denver for over 35 years I have always made several trips a year “home”.  Until these last years, when I moved my mom to Texas and now with her gone, I have not been here since my mother’s funeral last August.

It was with some apprehension I agreed to join the celebration of the birthdays of Riley (6) and Lexi (4).  I wanted to see my Colorado grandkids but was already reeling a bit from the first anniversary of my mother’s death and I knew a visit to my mountain home would emphasize not minimize my memories of my family.

Jordyn and I headed off yesterday afternoon.  Arriving at my daughter Amber’s home, while things had changed it all felt so familiar.  Much of my mother’s furniture makes it home now at Amber’s house.  I was greeted by the sight of our family dining room table with the oil painting from Brussels placed prominently upon the navy wall.  So many memories of holiday meals and family gatherings filled my mind. 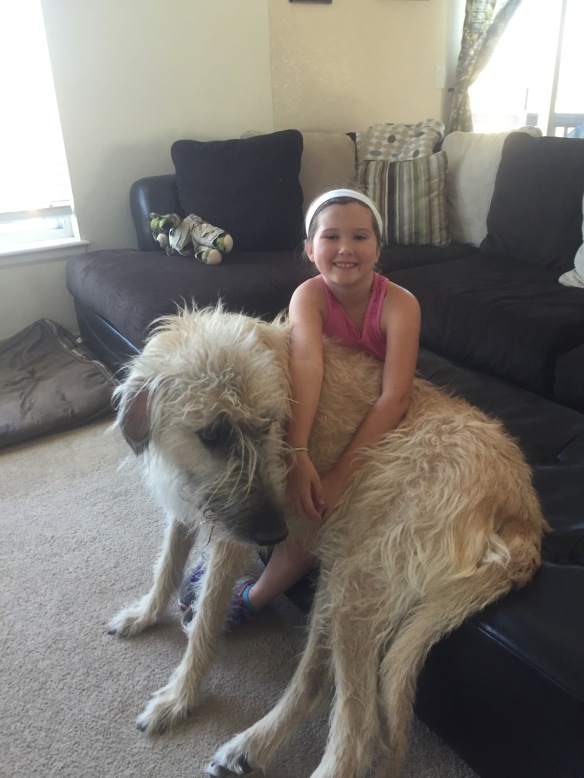 The sight of Nellie, the current Irish Wolfhound in residence at Amber’s, brought memories of our big dogs from before.  Jim always loved posing for pictures with the noble dogs. Nellie is a big girl with one of the best temperaments I have seen.

It was nice to sit down to a family dinner or pork roast and pasta.  It has been a long time since Lauren and I have bothered with a real meal.  I had forgotten how nice it was to enjoy great food and lively conversation.

Today preparations for the party started early (although not feed the horses at 4:30 early).  The giant bouncy house arrived, then the caterers and then the guests.  It was a beautiful day filled with fun, friends and family. 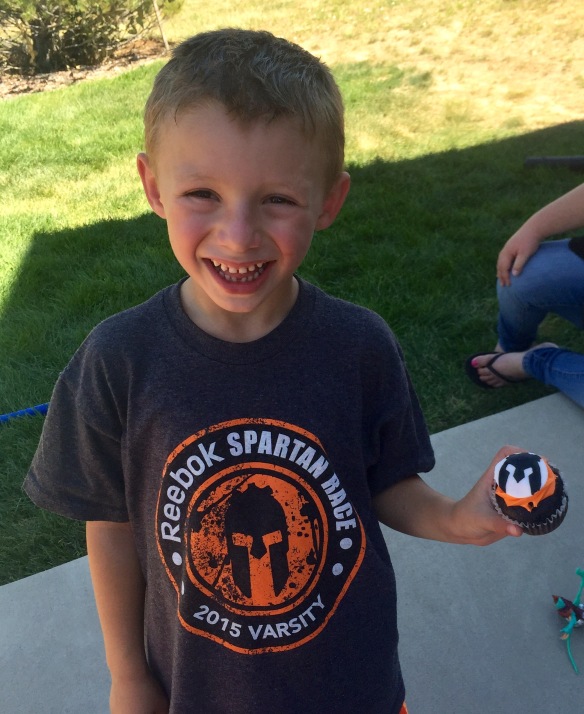 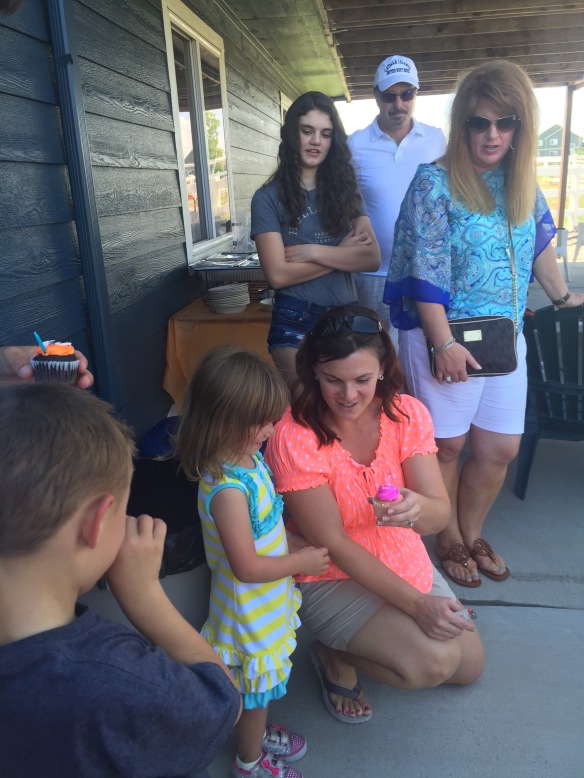 I guess returning home means starting new memories.  Memories I will have to cherish in the future.  Colorado said “welcome home”.

Jo on Snow and Abby on Ellie Mae-back riding together again.

Jordyn and Abby have known each other almost from birth.  Jordyn is about six months older than Abby but Abby has always been bright enough and quick enough to not only follow Jordyn but to lead her.  Sometimes that was not good, especially when they were three and four years old and known “shop” at the Equestrian Center boutiques, promising Caroline or I would be back to pay for whatever they had picked out (I have to say they usually had extremely good taste-I didn’t always want to purchase a $100 sweater for Jo).

Both Jo and Abby has older role models in their aunt/sister and the millions of kids they watch at the shows that they should be top-notch riders now by age seven. But both girls are equally skittish.  Trotting fine one day and reluctant to move forward the next.  We can easily blame that on some super-duper falls they have taken that have made them leery of anything Caroline or I promise.  fair enough.  It was great this last weekend to have a horse date without aunt or sister in tow, just the little girls to ride their ponies. 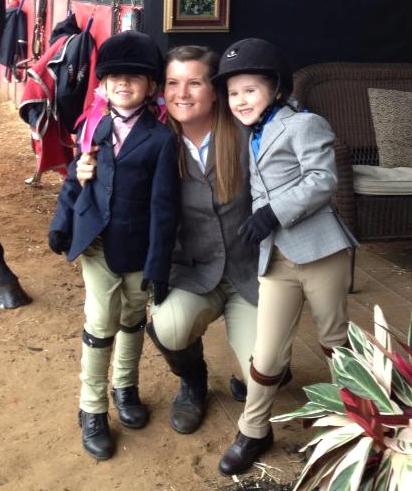