As we continue through the holiday week, Jordyn has spent the night a few times. As you recall, I have morning feed duty which consists of getting in any horses that pastured outside overnight and feeding, dogs, cats and equines. I have not accomplished this duty since my surgery. This has left Lauren on morning and night rotation. It is a little overwhelming, and while many of you will not get the reference, it is like being in the Groundhog’s Day movie, where you get up, you do the same things over and over, go to bed and get up to do it all the same again.

Jordyn has really come of age over the autumn months, confidently now, managing tasks that were beyond her previously. As you see in the picture above, she is leading Mickey, with just a lead rope slung over his neck, out to pasture in the early morning light. Taking Mickey to the pasture is an iffy proposition for any of us but Jordyn has been successful more than not. This morning, while having difficulty with Snowboy’s blanket, she made quick work of both Playboy’s and Avery’s blankets, just like she had been doing it forever.

This morning, My doberman awakened me around 3 am as she needed to go out. As I stood by the back door, Jordyn came down the hall. “Granny, is it time to go out and help Lauren?”, she asked. I couldn’t believe she was dressed and ready to go. I sent her back to bed. What kid can’t wait to get up to go out in the dark cold morning and clean stalls? This one, I guess.

Kendyll, too, has learned so much about the horses. When I am off at work I miss her almost daily adventures with the horses. I was surprised to learn upon heading in to make feed that Kendyll knew where each horse’s supplements were and which colored bucket they went into each day. It was just one of many things she has picked up, like each horse’s name and the owner’s as well. She will quickly inform anyone who asks (and many that don’t) all about Granny’s farm. The kids continue to take steps forward in becoming farm kids.

I laid the crutches down and tried a few steps on the cane yesterday. A little unsteady, a little frightened, I shuffled down the hall. A few steps at a time, I am walking again.

Momma and I enjoying our last Christmas.

Honestly, I tried to upload six other pictures but they all errored out.  I guess this was the one I was meant to post.  I am sure missing my momma on this first Christmas without her.

It is day 23 on my post surgical confinement.  My hip replacement turned out to be a little more invasive than thought.  They took out five inches of my leg and hip while replacing it with seven inches of titanium. Ow!  I mean seriously.

I have spent most days in my room, surrounded by my dogs and cat.  I have not even been out to the barn in over ten days, the gravel driveway proving to be my foe.

I have only left the house once in all this time except when visiting the hospital or doctor.  I have had plenty of time to think, to grieve my losses of this year and rewind the moments of celebration and happiness. I have given some serious thought to my life and my job  and bettering my commitment to both. I am going to be paring down and working harder. I am establishing new goals.

Of course, my first goal is to walk again, by myself.  And just manage some simple things like making my bed or feeding the animals.  From there I can step (get it, step?) right into filling other goals.

God gives us time to think and time to plan.  This quiet time is important to me. But expect to see some new photos soon and my return to life.

May you all enjoy a Merry Christmas tonight.  I wish you seasons of Joy.

Tomorrow morning, long before the sun makes it way up into the sky, Lauren will drive me to a downtown hospital for my total hip surgery.

We will exchange roles from earlier this year when I sat alone and waited the long hours for her surgical repair of her broken arm. This time she will be waiting and my bones will be replaced with titanium. I suspect Lauren may wander off to Chik-Fil-A at some point as the morning stretches out endlessly.

I would appreciate your prayers for myself and my family. Thank you for riding along and being our support system! 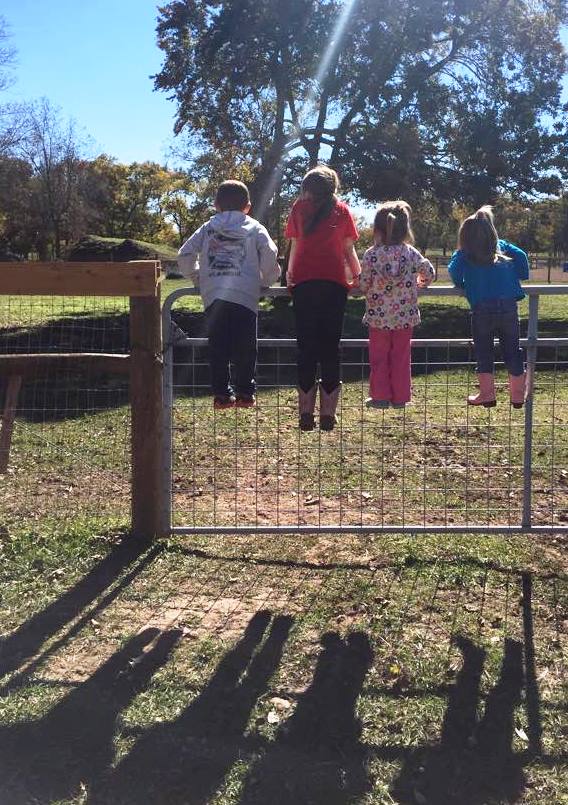 The grandkids hanging on the back fence, Riley, Jordyn, Lexi and Kendyll

I had the first turkey cooked and it was pretty well eaten all gone (as the kid’s say) by Wednesday night after the arrival from Denver of Amber, her husband Ryan, and kids; Riley and Lexi.  It was the start of good times, good eating and good conversation.

My dad used to be the designated driver to take my mom and her sisters’, Betty, Bill and Nova to Oklahoma City or Tulsa for their shopping trips.  He complained they never stopped talking the entire time.  I still think we scare Ryan (Luke has had a little more time to get used to us all) but when my daughters and I get to squabbling over something, four kids under eight chime in, seven dogs get to barking and a scared, crazy cat runs by, you know you are home for the holidays. It got a little loud and more than little bit crazy, but it was all well-intentioned and fun.

Wednesday after we polished off all the turkey for lunch, we took the four kids out to ride.  What an exciting time!  Riley and Lexi really have no exposure to horses or rural life until they come to “Granny’s Farm” but it did not affect their enthusiasm for wanting to touch everything and every horse.  I think they had mastered the names of all the horses (and ponies) by that first evening.  We took turns in the arena walking with Lexi and Kendyll while Jordyn and Riley made laps around the rail on their own.

Everyone pitched in to help feed and little Lexi, who at three years of age is a hair smaller than Kendyll at two, had to be lifted up as she held securely to the feed bucket and then dumped the night’s offering into the horse’s bucket.  I had gotten Lexi and Riley new cowboy boots for Christmas but they opened them early so they could wear them around the farm.  Riley’s had his favorite color, orange on the tops and Lexi’s were decorated with pink roses and pink horseshoes.  After all, you can’t hang out in Texas without your boots.

Son-in-law Ryan, got assigned to bring in Betty Sue.  I have to say I think he was a little enamored with her.  Ryan took her down to the arena after she ate and worked with her on her leading.  At this point in a long but fun day, he was definitely the most competent person to work with her.  He made her follow him and back and turn.  After her arena exercises were complete, Betty Sue got to have her ‘run in the arena’ time. I warned Ryan to hide behind a jump.  She looks so small and innocent but when she comes running down the long wall of the arena in a full gallop she is a bit intimidating as she slides to a stop right in front of you.  I saw both Amber and Ryan pull out their phones to video a little Betty Sue magic as she made her way up and down.  I had Ryan watch her change her leads precisely at the corner and we both marvelled over how pretty she was.  She is butt-high again-measurements tonight (Dec. 1st) so we will see how much she has grown this month.

We finally went inside to settle in for the night.

Amber told her kids that at Granny’s they sit on the floor and the dogs sit on the couch.

Thanksgiving dawned cool but beautifully clear. Lexi insisted on wearing a ruffled little grey dress.  Her mom wanted to her to change, but I helped her figure out some sweaters and headbands to keep her warm.  She was eager to pose in her strange outfit. 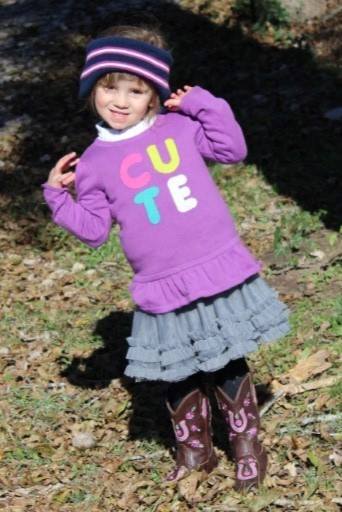 Lexi and her warm outfit.

The kids played as the day warmed up.  Casseroles cooked in the oven and crock-pot.  Luke was in charge of frying the turkey and it turned out perfectly. Luke’s parents, Blake and Libby joined us for Thanksgiving dinner and it was a grateful, appreciative group we formed around the table.  It had been a hard year emotionally and physically for many of us, but we all were grateful to be together.  Many times during long weekend I thought of my mom and Thanksgivings past.

After our dinner, Libby, Lauren and kids all rode.  Luke, Ally and the kids stayed over and Friday found another gorgeous day ahead of us.  By now, mowers had been fixed, fence boards re-hung and other tasks complete by the “boys”.  Ally got the tractor going with the dump cart hooked up behind.  The little kids, Lula and big kid, Lauren, all climbed in for rides around the farm.

Wheeling around the farm.

Friday night found us at our favorite local restaurant, Stevan Pho’s.  Both Lexi and Riley have nut allergies and Chef Stevan had cleaned out a special part of the restaurant to prepare their meal with no nut contamination.  Steak, crab legs and teriyaki chicken were a nice change from all the turkey we had eaten.

Lexi and Kendyll got matching dresses but different attitudes toward our dinner out.

I wanted a Christmas card picture with the kids and had in mind exactly how it should look.  My big quarter horse mare, Kalani was the go-to girl, when it came time for the grandkids to show their holiday spirit.  I left to get some props and told the girls to dress their kids in jeans tucked into their boots.  While the parents were a little skeptical, and I know I will hear about the lack of helmets, it was a magic moment aboard my wonderful Hancock mare as the kids rode together reminiscent of the de Leyer kids aboard Snowman over 50 years ago.

From littlest to biggest on Kalani’s broad back, Kendyll, Lexi, Riley and Jordyn

I am grateful, thankful and blessed.  Hope you all had a great holiday too!

Leaving you with one of my favorite shots of the weekend—