I returned to my Colorado homeland amongst the worst storms and flooding in years. It seemed like a sign. I was looking forward to the fall splendor in the mountains and what I can see with the limited visibility is more like another Houston storm. Streets are blockaded, the entire county of Boulder is just “closed”.

I have not been here in over a year since I moved my mom back to Texas with me. I have been lucky enough to see Amber and her family several times but I have not been here. Lexi and Riley are both at the ages where they change a lot-two and four, respectively. Also, one of my last trips here, the family wolfhound suffered a horrific injury and had to be put to sleep. I had seen pictures of my new grand dog, Nellie, a female Irish wolfhound but had not met her.

Immediately, as I entered their home I was greeted by this huge, beautiful girl. I had owned a male wolfhound as had Amber, but this was our first girl. She was a wee bit shy. But she was huge! At least as big as either of our previous males, she measures almost seven feet (seriously!) from her nose to the tip of her tail. I don’t think she is done growing.

She also has a sweet, calm, loving demeanor. No matter if the kids were crawling over her or rolling along on our rain soaked walk, she was a champ. I saw a year’s worth of photos of the dog! It was wonderful.

The sun is starting to peek through, Lexi, Amber and I have all had pedicures, and I am looking forward to a couple of nice days with my Colorado family. 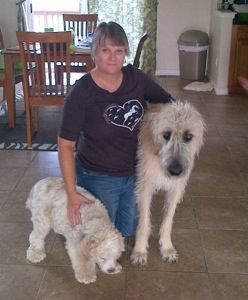 with my grand dogs Bailey and Nellie