My horse, Bruno, had surgery to cure an infection in his hoof, almost seven months ago. I had my fourth surgery to repair rotator cuff tears, three months ago.

I was scheduled today for an MRI with dye injected into the joint. I got to the imaging center in a pretty fair state of mind. I was actually more concerned about the money I was spending than I was the procedure. Then I got called to the x-ray room where they explained the procedure. I have had this done before and remembered needles in my shoulder, but I did not remember it as a bad time. However, I really remember child birth pretty favorably so there you go.

As she started to tell me about the needle and moving it against the bone and moving the needle again, I was almost sick. I asked her to quit talking. She told me I still had to sign the waiver. I said, okay, just no more talking. I almost left. Really. It went through my brain, that I would just have to come do it again, so I stayed.

My ability to tolerate pain is diminished. Both my shoulders hurt. I have been trying to swim and can’t. Ditto, lifting much of anything. I wish I had never had surgery on my left shoulder at all. It hurt before, but it worked. Not now. I am sure (I see doc tomorrow) that my right shoulder is completely torn, again. I am just as sure he will tell me I need immediate surgery or it will be unrepairable.

I don’t care! I just cannot do it again so soon or perhaps ever. Maybe I will have reduced use of my shoulders but can not take it again.

In this happy mood, I got home to an empty house. Okay, there were seven dogs but no Lauren. She had left a note.

She had cooked a turkey breast (peace offering). The dogs needed to be fed. Horses were fed. Then the all-star news of the day! Bruno was REALLY lame and needed to be stalled for the night. Lauren had started meds.

I don’t even know if it is the same hoof, but we can assume so. What now? I am just at a giving up point. Totally.

I hope that means better news is in store for us soon. I just hope. 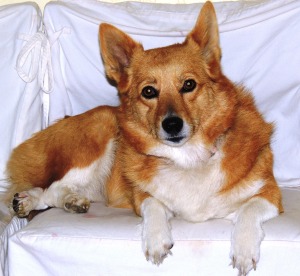 I resorted to taking pictures of the dogs today. Sneaky is Lauren’s Corgi.

It has been three weeks today since the orthopedic surgeon cut into my shoulder to repair my torn rotator cuff and remove numerous bone spurs. I am tired of sick leave. Don’t get me wrong, I am immensely grateful to have sick leave and not to be fretting over how I will pay the bills during this time but I am so ready to be back at work (did I really say that?) and back to be able to do the things I enjoy doing and need to do.

Lauren will rush from the house eager to be anywhere but here and I will agree to do something simple like put on Mickey’s and Feather’s fly mask for the night and send them out to pasture.  Go try to put on a fly mask or halter with one hand.  Good luck with that.  Even if I am left with very simple things to do, I cannot do them.  Frustrating!

At this point in my sick leave, my daughter, my mother and all my animals are sick of me.  Yesterday, I dragged my mom and Lauren to the nail place to get our nails done.  Fun for all but not necessarily in a group.  Today I was lying down with my mom after lunch and she called the aide to come give her shower.  She told me, ‘see you later’.  Wow, that is harsh.

I am pretty fun but dachshund Lula says she is old and doesn’t want to go out to the barn again to look at the horses,  We already went seven times.  The poodle can usually be talked into to chasing the ball, which I throw with my right hand, using a “Chuck-it” that makes it go really far, but even he had enough of chasing the ball in the 80 degree sun today.

I don’t know.  I started taking random pictures of the other dogs and even found a Welsh Corgi Facebook page to post Sneaky’s picture on.  They are running from me now.  I took some pictures of BrownDog but apparently there is not a Lab-Australian shepherd with maybe some Doberman mix Facebook page.  Don’t know why.

Lauren and Kona at the final ‘rally’ at dog class last night.

Even the obedience class which was good for a few hours of entertainment on Mondays, ended last night.  I have to say that Kona has learned a lot but most interesting to me was that Lauren who has been around and worked with animals all her life, had never been to a formalized training session.  J-Canine Pet Resort in Rosenberg, with trainer Martine, did an outstanding job of helping  both the owner and the dog learn productively.  Lauren learned a lot about patience, giving good commands, providing strong feedback and getting the best from Kona.  Wow, what kind of class was it?  Because both Lauren and Kona learned a lot!

We will be going back for next step in training as well.  Bravo!

I will stick out another week at home and get back to work next Monday.  I am beginning to understand a little about why Bruno wanted to escape and his fascination with watching the cows across the road.  You have to do something.  By next week, I might drive everyone nuts.