In fun things to try with your horses, my friends swear that all their horses eat bananas.  And I have witnessed it with my own eyes. 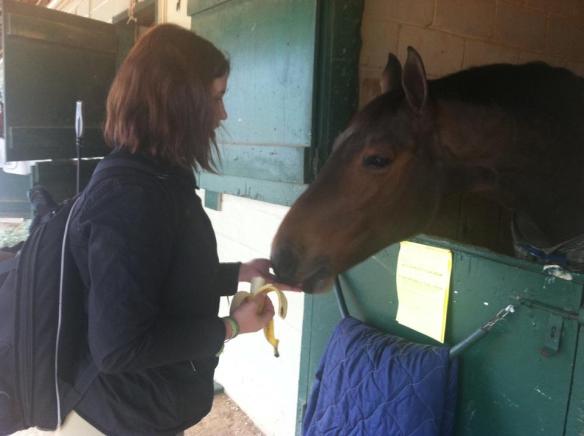 They go crazy over a nice, ripe banana.  I got a challenge yesterday after stating Bruno loaded for the reward of his big apple.  I was challenged to get some bananas and see if any of my band of horses would be interested in them. If they loved them like Ky did, then all my loading problems would be a thing of the past.  Last night, armed with a bunch of bananas, I headed to the barn.

Now, remember both Snow and Mick were rescue horses that had to learn to eat most anything to survive.  Snow has been known to eat all the plums off the plum-tree (I found him covered in plum juice and thought he had blood all over his white coat).  Snow will eat figs, oranges, any candy, strawberries, water melon and any type of granola bar.  Mick is a little more discerning but he has even eaten Chik-fil-a chicken nuggets (he is a herbivore) because the coating is sweet, loves red licorice, Gatorade and cream soda.

I went one by one down the stall line.  Feather, trustingly, took the piece of banana I offered and immediately spit it back at me.  No way!  Fortunately Kona was my science partner and was eating the fallen banana as we made our way down the aisle.  Mickey wouldn’t even consider the banana.  I got to Snow and figured, this is my banana eater! 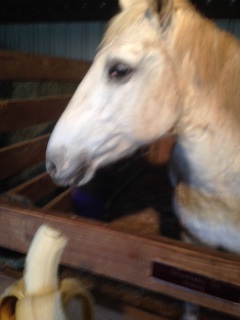 Snow gingerly tried the banana.  He had cleansed his palate with some cold water, then placed the banana in his mouth. Then spit it out.  Wow, not going too far with this.

Moving on to Bruno.  Bruno didn’t even eat carrots until Sherre puréed them and fed him through a syringe.  Just recently, Bruno started his love affair with apples.  So, it was possible that he might like the banana.  But, no, another failure.

We were down to the end of the line.  I had little hope that Kid would eat the banana.  Kid is not a real food oriented horse.  He does not even like carrots.  Kid did not disappoint.  He did not even consider the banana.  Not for a moment or even a second, Kid just lifted his head and walked away.

I find it very odd that all of Caitlyn’s horses LOVE bananas and none of my little piglets will even consider them.  Let me know if any of your horses like bananas because mine sure don’t.

I guess Bruno won’t be charging off to the trailer in hopes of a banana reward!  We did try. 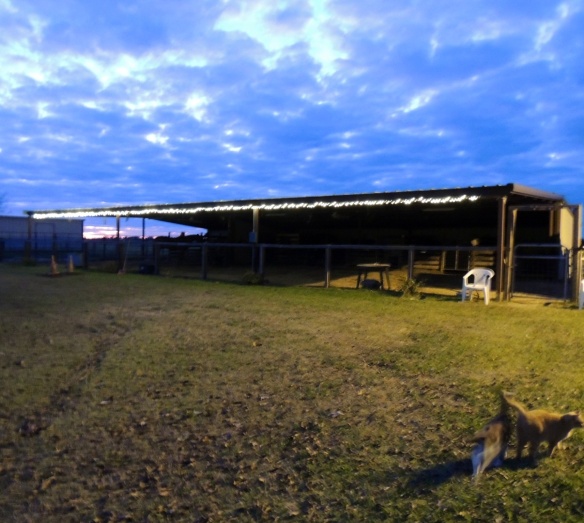 I changed the blog’s header to show last year’s Christmas photo.  It includes from left to right, Mickey, Feather, Me, Kid, pony Mimi, Lauren and Bruno.  I also added some falling snow that we hope to never see here in south Texas. I hope everyone enjoys the festive touch as they start making their holiday preparations.

Once I mail the Christmas cards, I will update with this year’s photo-want to keep the suspense going for now as to what this year’s card will bring.

George with a smile!

George Morris is one of the top experts on hunter/jumper riding in the world.  He is known to be straight-forward, exact and have high standards.

I strongly recommend his column which appears monthly in Practical Horseman Magazine.  Photos of riders from all over the country are evaluated by him.    George critiques their position, clothing, weight, turn-out and their horse’s ability to jump.  As you read the columns, month after month, and study the pictures, you are able to understand and visualize what the correct riding position is and also what a ‘good’ hunter or jumper should look like.

Rarely is there a moment when we are on horseback, at a show or at the barn with friends, that someone is not taking a picture.  Check out any day on Facebook, you will have plenty of opportunities to critique photos.  All you have to do then is apply what George has taught you, to your own riding, horse and skills.  It isn’t always pretty.

In the beginning, when Lauren was just starting out and we had just “discovered” George, rarely did anything about her riding match his standards.  But as time went on, Lauren and her horses started to approximate more and more what George suggested.  We were never brave enough to actually send a picture in to the magazine.

But local Houston riders, Kavita Sinha and Caitlyn Epperson, did send their photos to George.  Now, both riders are accomplished young women not the youngsters depicted in the photos.  I guess it takes a while for George to get through his mail, like six years.

It is pretty crazy that George picked both ladies out of all his photos to appear side by side, under the heading, Perfect Posture!

Anyway, read, enjoy, and take an opportunity to learn from George!  Congrats, to Kavita and Caitlyn!  George gave both of you pretty high praise.  I bet if he saw them ride now, he would be pretty impressed with the equestrians they have become! 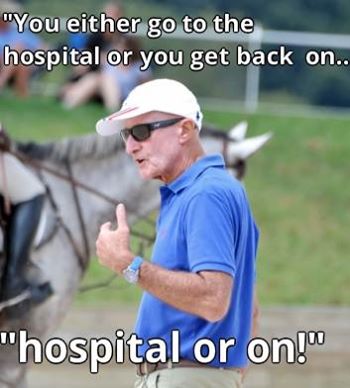 Seems fair enough to me!

After all was said and done, Lauren chose her all time favorite horse, little Mickey, to go to lessons. We wanted to see how he was doing after eight weeks off due to hoof problems. It was also nice to have a horse that easily loaded, stood tied at the trailer and jumped without complications.

Dev was pleased to see Lauren holding her position well while jumping.

Our friend, Alex, also rode Mickey and he did well for her. No, it’s not time for Lauren to start showing Mickey again but it was good to see him sound and happy.

Mickey and Lauren having a fun day