Lula and Kona with Bruno in the background.

Although still in the 40s which I understand may be better than what you are facing, it is still pretty cool for us southerners (Lauren was born in Florida and moved to south Texas). With wet and cold conditions, Bruno has barely been getting his rides in.  Add to that Bruno has only had maybe 40 rides this entire year, and you are apt to see a horse not wanting to settle in and work. 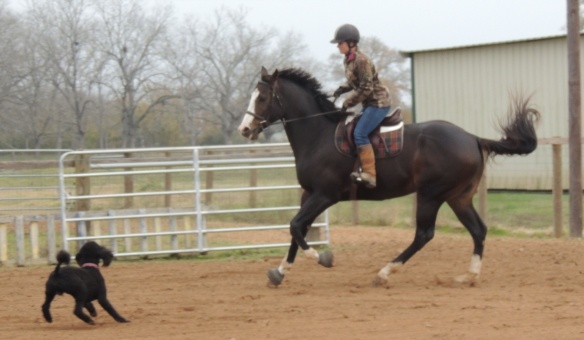 I am certain that Kona was a big asset in calming the fresh, green horse

It didn’t get whole lot better. Bruno pretty much refused to trot ( he said race horses don’t trot).   So, the first 20 minutes were spent “breezing” a pretty easy pace (like gallop) for a pretty good distance.  Bruno was running some sideways.  His tail was swishing away, showing his irritation.

He finally got a little rounder and a little softer.  Still there was nothing about this ride that spelled anything but green, young horse.  It was great to be able to got and ride.  Each ride builds on the next.

And at the end, Bruno walked straight into the trailer.  Day by day! Thanks for riding along with both of us!