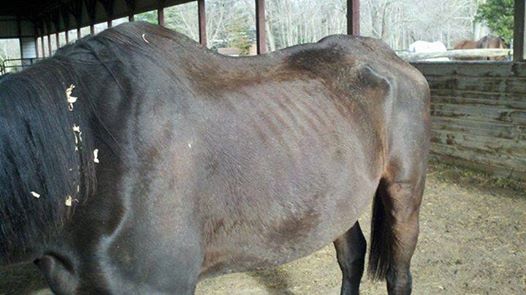 This famous boy near starvation just days ago.

I feel like nothing is forgotten faster than a thoroughbred race horse.  Everyone wants to produce the Triple Crown winner, the ‘one in a million’, the fastest horse ever, but if you are trying to breed that one in a million horse, by definition, 999,999 must not be the one.

I know there are issues with all horses, all animals in fact, but I feel that something about the thoroughbred, makes them the target for so much neglect.  The window is so small and the few that make it so limited, that maybe,   most  are simply done by age five if not sooner.

I have owned a few off the track thoroughbreds.  I have not exclusively owned thoroughbreds or dedicated my life to helping them, but I have done my best to help where I could.  There is not a horse in my barn right now that did not come out of some type of rough situation, a rescue, a bad start, or an injury or illness.

I heard about the horse above on Facebook, my source for much news these days. Particularly upsetting about this horse was that his sire is still a sought after horse garnering a large five-figure stud fee. The sire of this horse has a higher stud fee than Big Brown.  So someone must have thought enough about the idea of this horse at some time, to have paid a hefty fee to create him.

I do not know all the details.  But this horse was found near starved, infested with worms and covered in fungus.  Both of his back feet were raw and infected from-kick chains that had been attached to his feet and left for months to rub and irritate his fragile skin.  This horse is being secretly kept in a barn far from where he was discovered so that those previously involved in his care can never touch him again.

In an almost Lifetime Movie-like  scenario, when rescuers tried to help this horse, it made the situation worse. One of the biggest issues that faced this horse was that when the he was discovered in such horrible condition, the neglectful owner was threatened and berated.  Instead of keeping emotions in check and coming up with a plan to get the horse re-homed, these advocates of doing the right thing, nearly got the horse in more trouble by frightening the owner.  I am not at saying that the owner of this horse was right in anything they were doing, but when faced with this situation, the best choice is one that gets the horse out of harm’s way, preferably forever.  Contact a local rescue who can help deal with the situation.  Be calm, save the horse.

I sent my old OTTB Cupid’s warm stable blanket to this horse.  I included a note to the guardian angels that are caring for this horse now.  I was gratified to receive a note back:

“I want to give a HUGE thank you to Cindy and Lauren, her daughter, for the wonderful stable blanket!!! It is getting colder, so he will really appreciate having his very own pajamas!! Something totally cool is that just like this horse,Cindy’s first OTTB that wore it was also Breeder’s Cup Nominated! He will wear it with pride!! ”

It was a just a little thing to do but I was glad I could and making Lauren drive the giant box to the post office and wait in line to mail it, well,  hopefully that taught her something valuable as well.

This wonderful horse was good enough to be Breeder’s Cup nominated and yet ended up like this.  It could happen to any of ours. I am making a solemn promise that I will do my very best to humanely and fairly care for my horses for as long as I am able.  And if I cannot, I will find someone who will care for them for me.  It is the best I can do.

No more preaching, I appreciate you riding along!

Donations can be made to:

3 thoughts on “A Solemn Promise”