Houston’s CenterPoint Energy Company has sent a crew of 60 to Moore, OK today. Included is my lineman son-in-law, Luke Taylor.

I, like the rest of country, especially Oklahoma, is reeling from the storms, the massive tornadoes that hit the area recently.  I am overwhelmed with grief for the lost and shattered lives.

My mother is from Oklahoma.  She grew up there with her large farm family.  My mother is terrified of tornadoes.  No doubt, from horrific storms that drove through the state as she grew up.  These were the dust bowl depression days, they did not have much to lose.  Certainly there was not doppler radar or television meteorologists warning you to take cover.  She once described the weather forecasting at the farm to be based upon the color of the sky.  Black meant bad thunderstorms but green was a twister and it meant  everyone into the cellar until the storm was over.

We have so much information now and yet it did not save enough lives in Oklahoma.  Who could imagine telling someone they lost their child to a tornado, especially at their own school.  When I first saw the coverage last night, glancing at the screen with just the rumble that was left of the school, I thought someone had bombed a school in Oklahoma.  Indeed, they might as well have done so.  The students and teachers took cover but not deep enough or wind resistant enough to survive such a long-lasting horrific tornado.

I heard this morning of a man in Tulsa who has a Kevlar (like what they make tanks out of) storm shelter in his garage.  I suspect that can withstand some serious wind and pounding of flying debris.  Wow.

I remember as a child, growing up in Illinois, moving further north up the dreaded tornado alley, did little to avail my mother’s tremendous fear of tornadoes.  We had a big basement-no storm cellar- and we were taught to seek the northwest corner of the basement in case of a storm.  My father was out-of-town a great deal.  Whenever a storm threatened, with or without, a true tornado warning, my sister, my mother and I huddled in the basement with water in glass milk bottles (wow, that was pretty safe!), blankets, and a transistor  radio.  We stayed for hours at a time.  I think many of my formative years were spent waiting out storms in the basement with my family.  But we always took the warnings (or even the just the sky) seriously.

A couple of Friday’s ago, a tornado warning was issued during the storm that Lauren and I rode out in our little home in Wharton.  I was listening to the radio and heard the urgent call to take shelter.  We were lucky that the warning for a funnel cloud that extended through Fort Bend and part of Brazoria counties, never touched down.  But how many of us in those areas (we were just outside the warning area) actually took shelter?  I do not think we react as quickly or adequately as we should here in Houston.  I am glad my mother had no idea there was a tornado warning so close as I sure that even in her murky brain, alarms would have sounded and fear would have struck her heart.

And now as a reminder, this information could save your life:

Things to do when a Tornado Watch is issued:

What to Watch for during a Tornado Watch:

Tornado Warning– A Tornado Warning is issued when a tornado has actually been sighted or has been picked up on radar in your area. This means that you need to take shelter immediately in a safe sturdy structure. If you hear a tornado warning for your area-take shelter.  Discuss with your family what the safest spot is and be prepared to get there in seconds.  It may save your life.

Things to do when a Tornado Warning is issued:

What not to do during a tornado:

My heartfelt prayers are going out to the families and friends devastated by these last big Oklahoma storms. I am fortunate that my family in Oklahoma is safe, though not untouched by the devastation.  I am proud to say that my son-in-law, Luke, a lineman for Center Point Energy is in Oklahoma now, helping to restore power to those affected by the storm.  They will work long shifts but be a mighty partner to the local Oklahoma teams that need all the assistance we can give.  Thank you, Luke-please stay safe as you work to help others!

My God watch over all that need his guidance and care during these difficult days!  Keep the survivors strong and safe and help them to rebuild their lives. Amen. 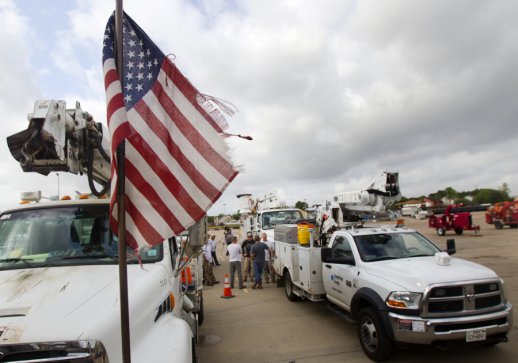