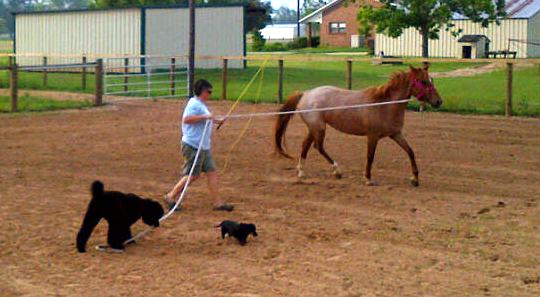 Lungeing the new Pixie pony helped out by my team of Kona (holding the rope for me) and little Lula.

I am lucky to have a great team of my family, friends and barn mates behind me as we go to shows, make decisions about our farm and our life.  This was brought home to me in many ways over the last several weeks as I have struggled with getting back to whole after my shoulder surgery.  So many  times, in so many ways, people just stepped in and helped when we needed it.  From friends and family that offered to help out at the farm, to those that simply held the door open for me as I made my way up at work through multiple keypass doors to my office.

Today we tried lungeing the pony for the first time.  Lauren was riding Feather and Bruno was romping up and down the fenceline on the far side of the arena.  It was not an optimum learning environment.  I was in the arena with my loyal companions of Lula and Kona.  I got Kona on Valentine’s Day.  I had surgery the first of April so I have not been in the ring working horses much since Kona has been around.  Lungeing is an art of moving a horse off his hind end in a circle around at the walk, trot and canter.  It is a way to exercise, educate and improve the horse without being up in the saddle.  We did not know if the four year-old pony had much instruction in lungeing.  It is sometimes difficult to manuveur the horse as you keep yourself in the center of the circle while constantly urging the horse forward.

I was surprised as I moved Pixie forward that she understood the lungeing concept as well as she did, but what surprised me more was that my “team” of poodle Kona and dachshund Lula were right there in my little circle.  It was a hazy morning promising to be the first hot day of 2013.  I handed Lauren my phone to try to snap a shot of my determined entourage that kept pace with the pony and I throughout the entire work out.  My favorite part was when Kona took hold of the lunge rope and stood resolutely behind me, making sure the pony did not pull on my shoulder or dash away. 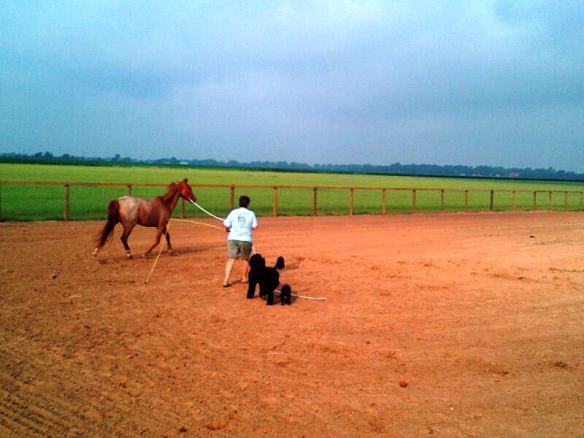 My team working the pony under the endless sky.