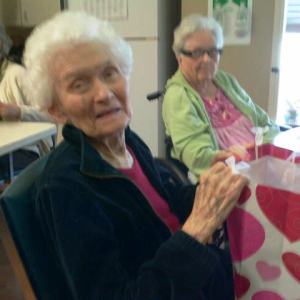 March Resident of the Month

My mom was named Resident of the Month at her nursing home for March and I enjoyed a celebration yesterday that included recognition of her and nice gift.  Mom, I think, was just confused about it all.  I haven’t been talking much about her because actually things have not been going well.

I do not mean to complain or embarrass her.  She has clearly told both my daughter Amber and myself that she does not want to live with diminished mental capabilities.  For the last several weeks (actually months, if I am honest) she has recognized me less and less and been confused more and more.

I had established a regular habit whereby I would go each day before dinner and visit with her.  Then we had a nice routine where I would help her dress for dinner, do her hair, her make-up and walk her to the dining room. Once settled in her spot, we would visit awhile longer, I would hug her good-bye about ten times and go on home to my own evening chores.  It worked well for me and I hoped that the routine was soothing to her.  The staff could always tell her that I was coming at a certain time and she could count on me to be there.

For the last few weeks, she has not wanted to do anything I suggest.  She is defiant, scared, anxious and stubborn.  Several times she has flat refused to even go to dinner. One night she sat in lobby, missing dinner, waiting for Jim (who was in the hospital in Arizona) to come pick her up with purse and nightgown.  I eventually left her sitting there-feeling guilty as I did.

I am at a loss as to what to do for her or with her.  She wants to move home with me which is just not possible.  I am gone at least 12 hours a day.  She needs the care she gets at the nursing home. But that is really just a small part of it.  Each day she has some new (or sometimes re-occuring) delusion about what is happening in the nursing home.  From sinister invasions to horrible weather conditions, each event is overwhelming and difficult for her.  No matter what logic I use, she is convinced I am wrong.  She tells me, “Really, you just don’t know!”

My latest thoughts have been to see about changing her medications and perhaps get something to help with the anxiety and depression.  I HATE DEMENTIA!  I also am trying to hire a ‘sitter’ that can stay with her and keep her company through the long days.

One lady had been recommended but took a full-time job before I could hire her.  Another lady, Janet, came by last night.  I found her quite pleasant and could tell she was trying very hard to assimilate herself into momma’s world.  It was a major failure.  I told mom that Janet was a friend of mine and that she could help her like Debbie and Gail did in Denver.  She was not buying it.  She got very agitated and told us, swinging her arms for effect, Janet could not help her!  It was not allowed in the center!

So, tonight I am at home and attending to bandaging and re-bandaging Bruno’s two bad feet.  I gave him a big shot of antibiotics as well.  Janet is at the nursing home with mom and we will see if she makes any headway in establishing a friendship or relationship with her.  We will give it a couple of tries.  Then I will think of something else. She is resident of the month at a place where she does not want to be. I have no idea what to do next.

1 thought on “Resident of the Month!”