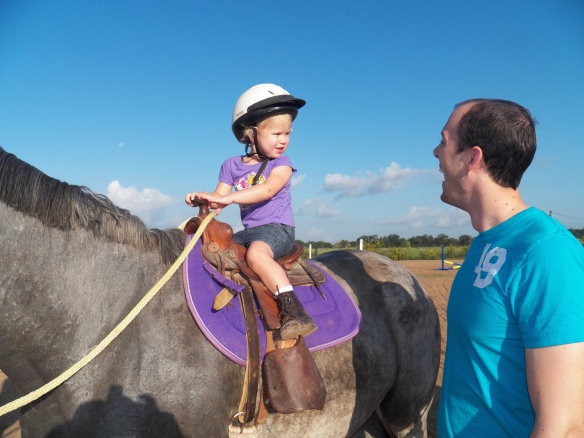 Little Zie on Feather looking at her daddy with joy

My friend came to the farm today with her husband and daughter.  We have talked about this outing for some time but conflicts from one side or the other kept arising.  And honestly, just because I think this whole ‘ride horses’ thing is fun doesn’t mean others want to get out and spend time with hot, dirty horses in the Texas heat.

We didn’t know what Micenzie would think.  She is a little girl with some big opinions.  She seems to like things or hate them.  When she first arrived, Jordyn was all ready.  She had her helmet, shorts, half-chaps and paddock boots on.  Perfect summer riding attire.  Zie had borrowed an old pair of Jo’s paddock boots and was going to use Jo’s first helmet.  It was blazing hot, even at 8:00 am.  Feather was already drenched in sweat.  Zie was not interested in touching the horses or brushing them even when Jordyn gave her the favorite pink brush to use.  Nor was the child impressed when I showed her how Feather liked to eat treats.

But we saddled Mickey and Feather in little saddles and headed to the arena.  We had Jo get on first-hoping to set an example for Zie.  I spent some long moments last night deciding which child would ride which horse.  As ridiculous as it sounds, with Mickey being off the work schedule and ‘feeling his oats’ as my daddy used to say, I thought it would be better for Jo to ride him and put Zie on the inexperienced, somewhat unpredictable four-year old mare.  I figured if Mickey decided to do something stupid, Jo would have a chance of staying on him.

We didn’t really give Zie much time to contemplate if she was going to ride or not.  I had her daddy lift her up to the saddle, told her to hold on and off we went.  She never looked back.  I led her around the ring a few times while her folks were snapping pictures and taking videos.  Jordyn wanted Mickey to go over the low jumps (he just walks over them but she calls it jumping).  So of course, Micenzie did the same.  After a few rounds in the sunny ring, I gave the leadrope over to her parents and they alternated leading the little one on the grey mare around the arena.

Obviously all went well.  I was poised for a little two-year old tantrum when we needed to stop riding so we had a couple of trial separations of Feather and Zie that she did not willing participate in.  The first time we got her off to see the cat.  All she wanted to do was to get back on.  With tears in her big eyes, I easily relented and she was back on Feather again.

Micenzie and her mom had come to one of Lauren’s horse shows a few months back when Lauren had been showing Leo.  Leo is a sweet guy and Zie had been quite enamoured with him.  But I remember her mom telling me that she had cried so hard leaving the Equestrian Center (I want my Lee-Lee-she kept saying) that she had soaked her car seat.  I did not want to re-enact that.

Zie’s dad had gone to their car and come back with a bag of small apples for the horses.  I knew Mickey would be all over that.  I let go of Mickey and Jordyn and Mickey high-tailed it around the arena following Michael and his bag of apples.  Mickey was actually inhaling the apples almost whole.  Occasionally he would bite off a piece and make the apple last for two bites but most times, he simply chewed the apple up.  I think Zie was pretty delighted with the whole Feather eating the apples from her mom and dad.

I actually don’t remember how it was decided that it was time to get off but Zie did so willingly.  In fact, her mom, Cayla and I had rush over because she was getting out of the saddle on her own.

Later inside, Jo and Zie played with the dogs.  Zie took all the dogs in stride, from the Doberman to Puppy Girl.  She hugged them equally, and hard.  Jordyn played her favorite video of Lauren jumping a horse with a song from the Eli Young Band called “Always the Love Songs” playing in the background.  They are a Houston band and talk about a “place just off 249”.  Little Zie came to Lauren and said “249!  249!”.  I guess she wanted to watch it again.

Good day at granny’s farm.  The joy of children is one of the most wonderful gifts I could have been given today.  I warned Cayla though, that she was in trouble.  This little girl would want to come back and the horse bug would hit hard.  Oh, well!