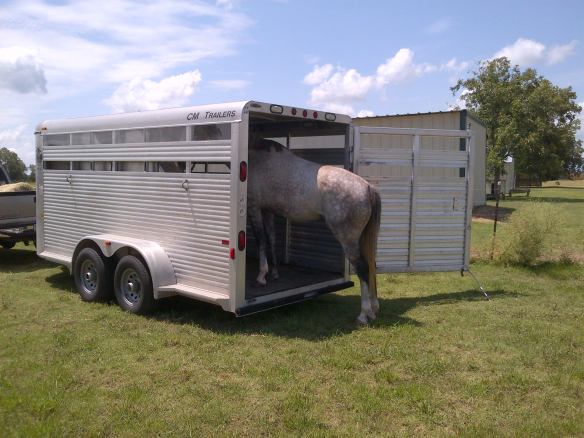 Anticipating Sarah coming for the last several days has been difficult.  I have had plenty to do and think about without obsessing over if Feather and Sarah would successfully come to an agreement about loading in the trailer.

Obviously, there is Ally and new baby Kendyll to think about.  This morning when Ally was alone for a few minutes, Kendyll decided to choke on her breast milk and turned a bad color of purple.  Ally leaped out of bed (c-section be damned) and tried to get the baby breathing right again.  In what felt like a lifetime to Ally, but was actually just a few moments, the nurses came, the baby took in a deep breath and all was well but it was very frightening.  We saw them this afternoon and all is fine and baby is doing great but Ally has something new to watch and worry about with her new baby.

Yesterday was hay day again.  While I did a lot of the driving, Lauren had a hand in loading over 170 bales of hay.  Just as one set of friends left, another came.  It was a blazing hot Texas day.  The first 80 was just us women, loading hay and working hard.  I was driving one friend’s SUV with the trailer attached.  Four-year olds, Jordyn and Abby were in the in back with the lady’s seven year old.  She asked Abby and Jo if they lived in Fulshear (a nearby town).  Abby answered for both them, “no we live on Earth”.  Can’t argue with that, can you?

This is day three with Jordyn and we love her dearly but neither of us are used to non-stop four year-old fun.  She has ridden all the horses but Leo.  She has played and played.

Work has its own challenges right now with budgets due.  So, lots going on in addition to worrying about Feather.  But I did worry.

Sarah got here in the heat of day.  It was noon and over 100 degrees.   Sarah visited with her old horse, Mr. Kid.  She scoped out the best plan for loading Feather.  She backed the trailer into the paddock and it was on.  No gloves, no chains, no lunge ropes, nothing we had tried just a rope halter and lead rope.

It was a little gratifying (for the first ten minutes) that Feather didn’t just immediately load up.  It showed that Lauren and I were not just idiots that couldn’t handle a horse.  When she still hadn’t loaded and stayed in the trailer an hour and a half later, no one cared about gratifying.  Sarah just took her up, one hoof at time, rewarding the positive and tapping her with her whip when she backed off the trailer. There were a couple of crazy moments, like when Sarah had gotten her in the trailer but Feather had spun around toward her and was coming at her like an all-state defensive end.  There was some quick scrambling on Sarah’s part.

But in the end, Sarah stood by the end of the trailer.  Feather, with the lead rope loose around her neck, walked herself forward, into the trailer  on her own.  She stood quietly as Lauren and Sarah got the slant closed.  My heart was pumping hard as Sarah finally put the truck in gear and drove away. Feather will stay for a week and have these lessons reinforced.  I am so happy that the future is still bright for this promising mare.  And happy that patience and repetition earned its own reward.  Mickey, however, has not stopped neighing for his girl, Feather.  It will be a long week for him.

Thanks for riding along on this incredible journey of my life.  Keep us in your prayers, especially baby Kendyll and Ally. 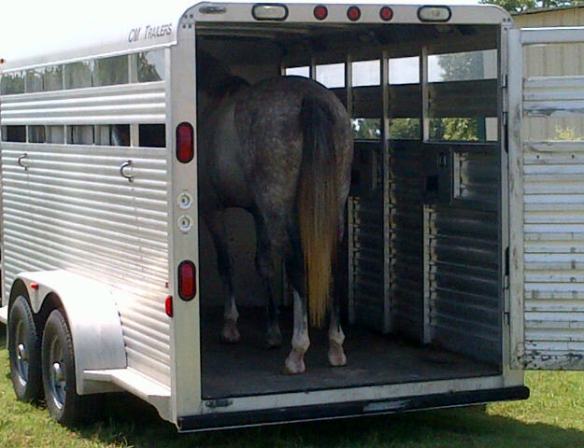