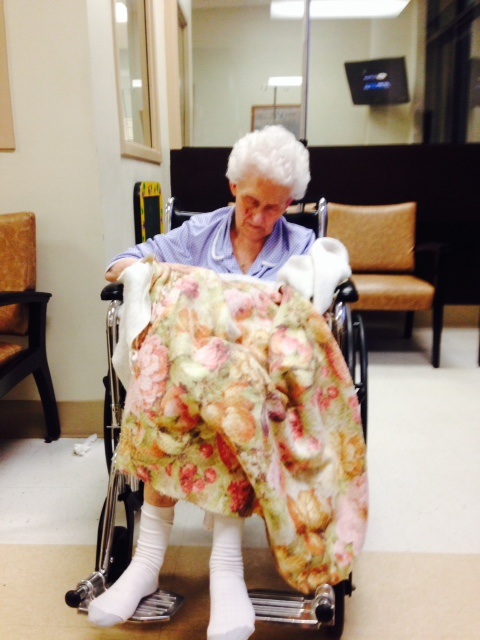 Waiting to be seen.

I got a call from the nursing home that my momma had fallen again on Friday.  They told me she was found on the floor but was fine.  That’s what they told me the last time, then hours later she was at the ER with a horribly broken arm.  I did not think it would go any better this time.

Later, Janet, the sitter, called to tell me my mom’s fingers were swollen and turning black.  I knew what this meant.  She had fallen on the bad arm, it was swelling inside the cast with no where for that swelling to go.  I called her orthopedic doctor and was told to go to the ER, have them remove the cast, x-ray it, then put a splint on it.  We were out to dinner, but hurried home.  Ally arranged for her in-laws to come pick up her kids, so she could go with me.  Lauren stayed to do all the horse chores.

Thank God Ally went with me!  From weeks in the wheelchair, mom was weak, feeble  and not to mean, it was a little like trying to load a dolphin into a sub-compact car.  A dolphin with a severely broken fin.  It took two of us to lift, maneuver and slide her into the car.  I could not have done it myself.

Once we got to the hospital, everything took a long time.  One year ago almost to the day, Ally and I had been in precisely the same hospital room as she waited to be treated for her broken elbow, gained when she fell from my hay trailer.  The memories were not good.  By the time the doc came in, my mother’s flesh was ballooning out of the cast and her fingers were turning black.  He told us if we had not brought her tonight, she could have lost her fingers as the swelling cut off the circulation to hand.

Since it was Ally and I with my mom at the ER, absurd things happened.  First, two hours into our visit, the doctor came in to tell us they did not have a cast cutter.  Really? I had visions of having to drive mom all the way back to Houston and start the whole ER wait over.  A while later, the doctor came back with a model of a cast cutter I believe I last saw in use in 1975. 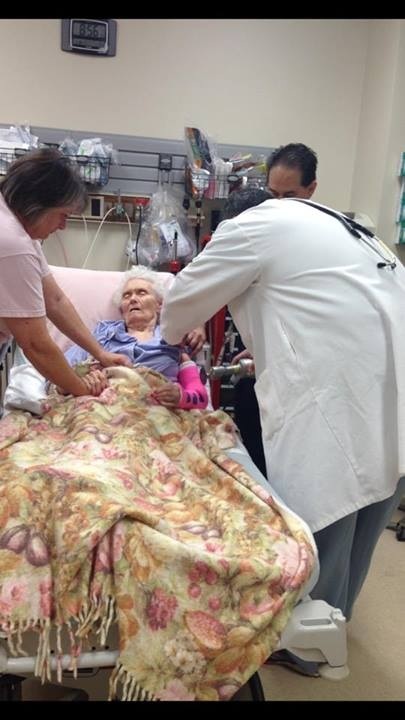 Attempting to cut the cast off.  Enlarge this picture and look at her fingers!  The nursing home told me she was fine, her hand was not hurt, she could wiggle her fingers.  They had no idea what was happening with the horrendous swelling.

Mom was in x-ray forever.  It was late now, both Ally and I were tired.  We got a little nutty. Once mom came back from radiology, she fell into a deep sleep.  Ally and I meant no disrespect, we love momma dearly, but in the late hours we took a selfie with momma as she slept on obliviously.

What can I say? It was late.

There were not any new fractures which was good.  Now, it was time to put on a new, looser splint until we could go back to the orthopedic doc and get a new cast.  We waited and waited some more.  The nurse came in to tell us they did not have enough gauze so someone was running to Wal-mart to get some.  When we told this to Luke, Ally’s husband he was stunned.  What if they had a gun shot wound or something?  Well, I guess the store is open and close by so it would be okay.

Multiple times I offered to get her old cast out of the trash and just duct tape it back on.  It would have been fine, plenty of support and we could tape it loosely so the swelling want an issue.  They laughed at me but I was totally serious.

The nurse brought two other nurses in to watch him put the splint on.  I sure would not have.  After years of working with orthopedic surgeons I would say it was the worst wrap job I had seen.  The first layer of gauze looked like toilet paper wrapped around branch from a drunken night of TPing the neighbor’s house.  I hoped it would be okay until we got to the doctor this week.

We got her back to the nursing home after midnight.  One of her favorite sitters was there to be sure she stayed safe all night.  Problem is, I don’t know what to do now.  Clearly, this place is not keeping her safe and we cannot afford round the clock sitters on top of her other fees.  A nursing home is twice the cost of an assisted living place.

My mom will be 90 on Wednesday.  It will pass in fear, pain and bewilderment. What a horrible ending for such a vibrant, God loving woman.  My soul is sad!