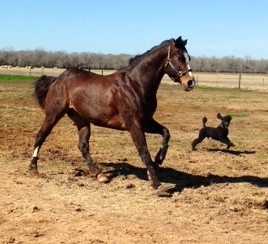 Finally, the weather has finally broken and south Texas has started to look and feel more spring in the south and less like Chicago in November.  We will remember this winter, and not fondly.  While we certainly have not had the deep snow and below zero temps of our northern neighbors, never in the last 20 years have I experienced multiple ice/snow days or as many cold temperatures.  At least not since I have made my home here.

We got really good at draining the pipes and shutting the water down as a preamble to freezing temperatures.  Once you haul two blankets for every horse to the barn, it is not that much trouble to throw the second one on when the temperatures start to dip down.   We finished using all 80 bales of hay this week that I had budgeted to last through until March.  Sitting in stalls all day with no pasture and trying to stay warm means more hay per horse.

This period has taken a toll on Bruno and his legs.  He pulled up lame about three weeks ago in his good front leg ( not the surgery leg).  With the bad weather there has been little we can do but wrap it and pray.  Ten days ago, he went out for a brief trip to the arena (which was marginally dry) and ripped the shoe from that foot.  He immediately started getting better. I am guessing it was an abscess.  Gee, we haven’t any abscesses in years and two horses go bad in two months. 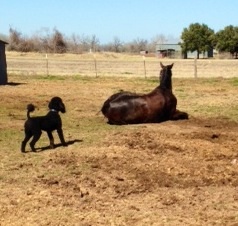 Bru going down for a roll on the soft ground while the poo looks on!

Friday dawned clear with a forecast for a warm, sunny day (finally!).  By afternoon, the front pasture was sufficiently dry enough to allow Bruno to head out for a romp for the first time in weeks.  The good weather coincided with Bruno also being sound once again.   The day before Lauren had taken Bruno out the gate to practice trailer loading and the big guy about dragged her to the pasture.  We sent Snowboy out with big Bruno and old Kid in hopes Snow would be pushed around and made to run in Kid’s place.  Bruno took off from the gate with Kona the poodle and Snow the pony, strung out running behind him. 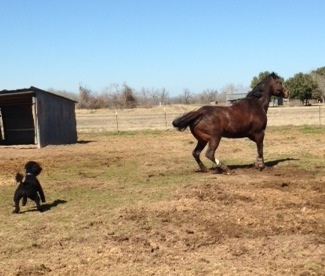 Look how both Bru and the poo are rocked back on their haunches.

I thought I was videoing the great race of the white pony, black poodle and giant race horse, but apparently failed to hit the record button.  Maybe video next time, who knows? 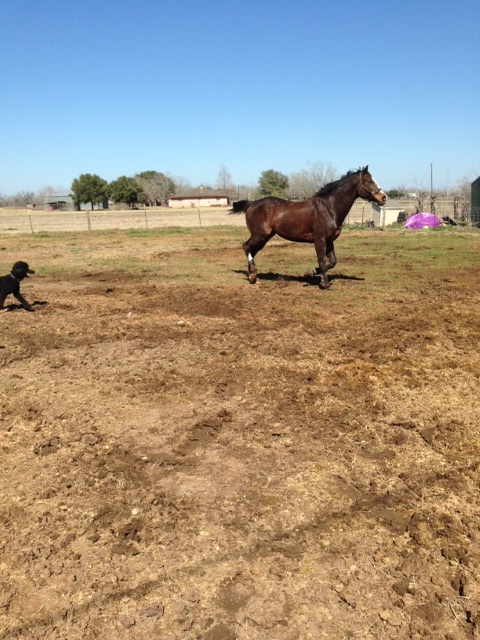 And off they go again!

Feather had her first ride yesterday since returning home from the show two weeks ago.  Like any athlete, a horse needs regular exercise and conditioning to stay fit. Just couldn’t happen during the great storms of 2014.   Feather went to a lesson today, loaded first time easily, and was very alert and ready to jump.  Dev told Lauren her body control was better than usual especially with how high and hard Feather was jumping. 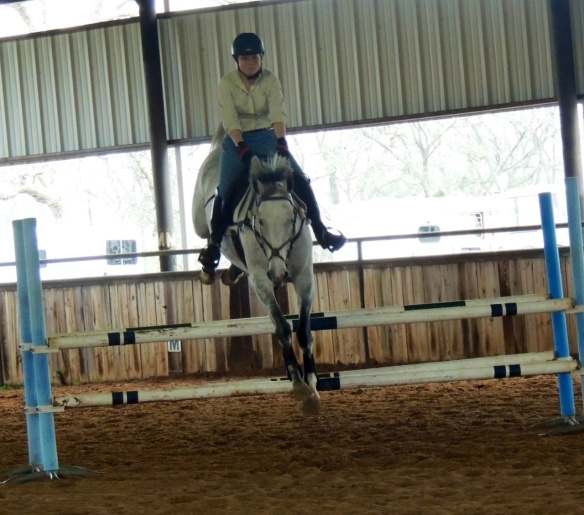 The standards are five foot. I would say Lauren is at least seven feet up in the air.

My favorite quote of the day was when Dev told us that “Feather looked so good, she was jumping her pants off!”   It is nice she can be off a couple weeks and come back strong.

Levi is fast friends with the new Hula cat.  He calls him “Professor Burmese” because he is so worldly.

Thanks for riding along, I am headed out to see Lauren ride Bruno for the first time in a month.  Nothing like rodeo action in your own back yard!