As I look through my mesh wire fence, I see the intricate web of ice glistening off the wire.  Temperatures dropped below freezing last night not long after sundown.  We did our new routine, drain the pipes, and shut off the water well.  We were not taking any chances on broken pipes. 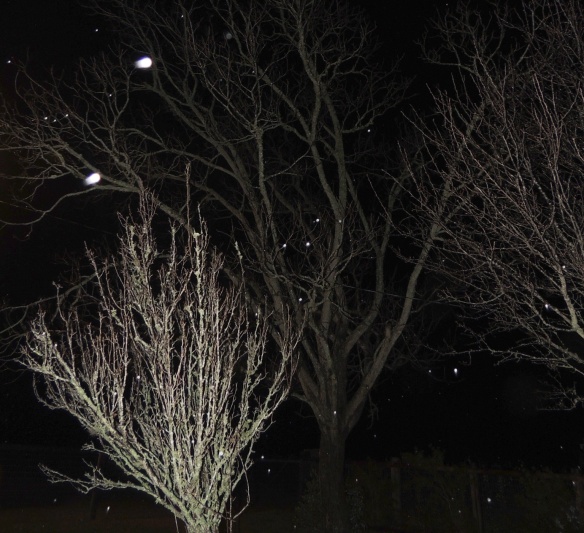 My frozen trees twinkling in the early morning darkness.

I did a rushed prep of the horses and barn last night.  I got out of work a little late, while everyone else in Houston was getting out of the office a little early. The rain was continuing and the temperatures dropping rapidly.  Normal commute- a little over an hour, last night’s almost two.  I got to my mom’s to find her shivering, asleep in bed.  I tried to wake her but she would open her eyes, then fall immediately asleep again.   As I tidied up her room, I heard her breathing with difficulty.  Then deep coughs from her chest, punctured the quiet of the room.

Sounded like a bad cold, which had already gone to her lungs.  Then helper Janet arrived.  She would get some soup, juice and crackers and let momma have dinner in her room.

I left her with Janet and headed home to my new responsibilities.  Yesterday at Dev’s, Feather had sent Lauren flying through the air when she stopped short on a tall, skinny jump.  Lauren hit the ground hard.  When  she called me it was like a never-ending list of ailments.  “Momma, I think I tore my knee (you tore your knee, again, I thought.)  ” my ribs are broken.  My pelvis and back hurt. My neck feels like it has whiplash!”  All of this she bawling over the phone.  I got her talked down some.  If any of those things were true she would not a just loaded a horse and be in the truck headed for home.  At least I hoped not!

By yesterday morning she could barely turn her neck.  Off to the doctor she went.  She was x-rayed from stem to stern.  Doc said the X-rays looked good but she had swelling and soft tissue damage in her neck.  Then he asked to see her helmet.  Lauren rides in a GPA  helmet.  A GPA is over $500 but has a neck guard and can be replaced for a fraction of the price if damaged.

Based upon the swollen, traumatized areas of neck, the doctor told her that without the neck guard piece on this helmet it would have been likely Lauren’s neck would have broken!  Slipped past a bad one there, eh?

Anyway, point is, I still had to pick up some dinner, get home, feed, water horses and dogs, blanket each horse and try to stay warm as 50 + mph north winds whirled through the barn. Lauren was going to need to sit out the chores if there was any hope  of her making the show next week.   I was pretty tired and ready to get inside.

We had a winter storm watch on everyone’s lips and I went about unhooking hoses, emptying and clearing the hoses and house water lines.  It was COLD!

Electricity went off during the night as the winds pounded the power lines. My early morning feed today was  one of the coldest ever endured here in the banana belt of Texas.

Lauren  was still peacefully enjoying her drug induced sleep.  I was cold.  Schools and many businesses were closed today as the ill prepared for winter conditions highway department launched a mostly futile effort at melting the ice.

After noon, we ventured out to see a movie.  There were on a handful of people there. We saw the movie, August, Osage County.  It was quite good but had a lot of adult behaviors and the ‘F’ word said more times than I have ever heard in an hour and 55 minutes.  About a mother with her three daughters.  We are all dysfunctional in our families but hopefully we never get this bad.  Lauren is asleep again, knocked out by muscle relaxers and pain pills.

I am about to go out and throw hay to the horses as it will be another long, cold winter night, then a quick shower, drain the pipes and off to bed.  And then I’ll do it all again tomorrow.

Oh, and momma’s much better today!  Thanks for joining me on this cold winter night!  Be safe!