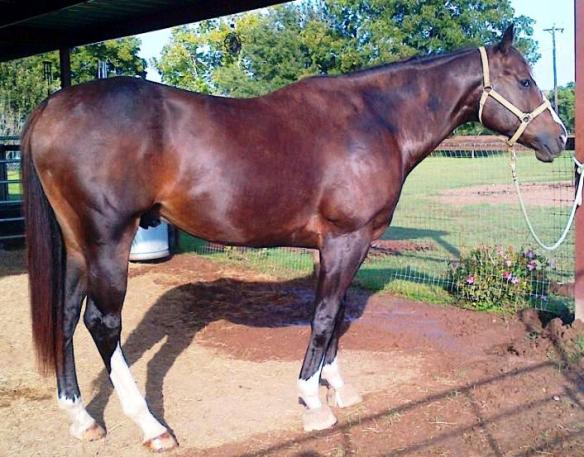 Bruno in the summer, a little lighter than his winter black coat. 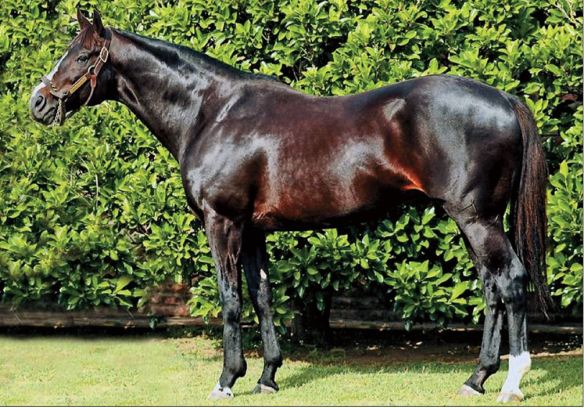 I decided this weekend to search for Bruno’s relatives.  I found his sire (daddy) Jump Start still actively producing successful off-spring in Pennsylvania.  Jump Start by AP Indy has many race winning progeny on the tracks now.  I was not so interested in Bruno’s half brothers or sisters as I was in what Jump Start looked like and the pictures did not disappoint me.

Jump Start is 15 and never had to do much work after five starts on the track, and a fracture that ended his career.  We can rule-out that he ever lived in a metal, open-front barn in rural Texas.  So, I can give him that he has had superb care to produce his stunning coat and he has been a great breeding stallion.

Jump Start parading past his throngs of visitors.

We have had a lot of people (okay, maybe 12!) come have their picture taken with Bruno.  I would be frightened and call the police if I saw this pack of people lined up outside Bruno’s paddock.  Once, our neighbors grandkids from Spain came over to give Bruno carrots.  Similar lives.

I tried in vain to find out how tall Jump Start is but I couldn’t locate that data.  Maybe one of you has more investigative skills than I can find out and can let us know.  But unless the man above is a former NBA player turned groom (most of whom tend to be a little small in structure) I think Jump Start is probably just over 16 hands.  He clearly does not have the size his son Bruno does at 17.2+ hands, but that happens in families, kids getting taller and stronger than their fathers.

Looking at the two top pictures, Jump Start blessed Bruno with his strong shoulder and nice hip.  I have never owned a horse whose coat glistens like Bruno, but it looks like Jump Start sent those genes to Bruno as well. I swear I should get an endorsement deal from Nu Image supplement that we use for Bruno’s hoof and coat because never has a product worked as well as did for Bruno!  I know that helps some, but this coat is shared by both horses. 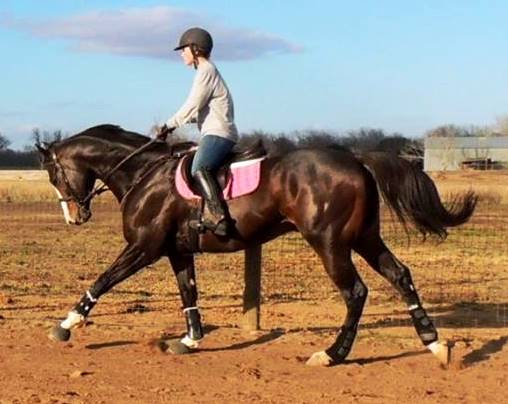 Bruno showing off his gleaming winter coat this weekend.

Personality seems to be apparent in Jump Start and we know that Bruno is the biggest ham, always playing to the camera and wanting to just hang out with any people who come to visit.

Jump Start looking brilliant and attractive for the camera. 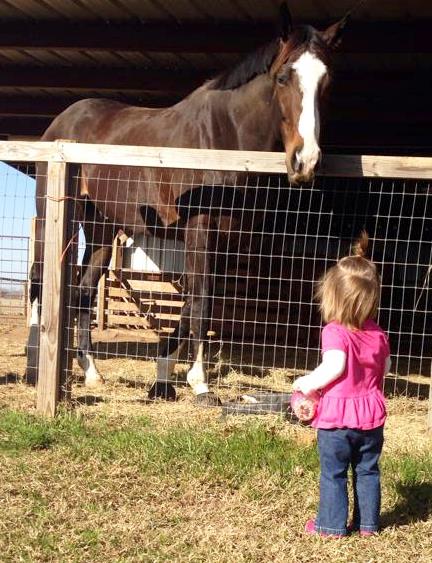 I looked up some of the horses that Jump Start has sired. He has been a busy guy.  At stud a little over ten years, he has hundreds of children!  Bruno’s Jockey Club name is Fiddler’s Pilgrim, related I am sure to the Fiddler’s Green Stable that owned him and his pilgrim-like markings (black outfit, white socks-come on, you can visualize Bruno as a pilgrim, just give him a musket to hold).

In naming his other brothers and sisters, there were several that retained part of the Jump Start name.  Progeny includes Jump Two, Jumped the Harbor, Jump and Go, Jump Back and Jump Aboard.  When Lauren finally enters the arena to show Bruno in Jumpers wouldn’t one of these names better suit him?  Next in the ring  is Jump This ridden by Lauren Davis from Wharton,Texas!  It would be great.  Or Jump Prize or Jump Quick?  Those would be so appropriate.  However, my favorite name of one of the Jump Start kids is…wait for it… Start Jumping.  I could have really used that name for Bruno.  In fact, if I had a couple of expletives in front of it like Golly Gee Start Jumping or perhaps, For God’s Sake Start Jumping, I could have invented a whole line of new names over the last several months.  Bruno might have been reluctant to jump but he is doing so now.  Still…I would have loved that name.

Jump Start easing around the pasture. 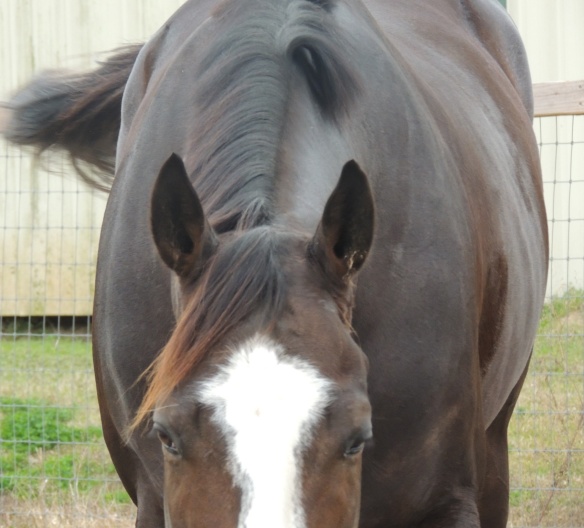 Bruno looking me in the eye.

It is fun to compare the big guy with his prolific father.  It is ironic they both ran five races and ended with injuries.  I guess I am just lucky they never decided Bruno should be a hot-shot stud like his dad.  I am guessing he would have never ended up in my little barn then.

As always, thanks for riding along with us and may God bless you.