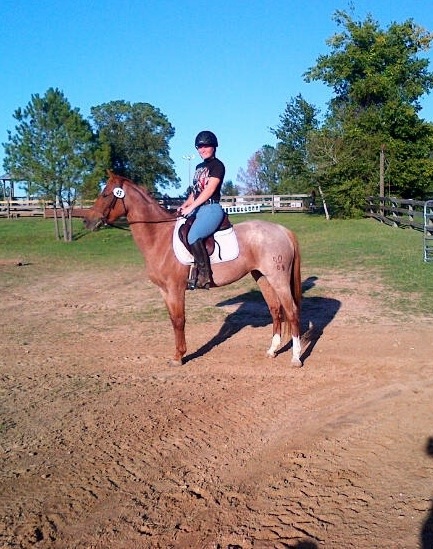 Some horses I buy with the clear intent of working them, training them and then selling them on. Because my heart inevitably gets caught up in this process it is not near as neat as I describe it. When Pixie first came from Florida, from the same folks we bought Feather from, I was not at all sure if I would move her on or try to keep her as Jordyn’s show pony. Snow is great, but at age 20, his best show days are past.

Pixie is four years old. A time in a horse’s life that a lot is learned. Pixie came to us with a smart, inquisitive mind. I rode her a lot in the first months. I enjoyed her. She was quiet, pretty easy to handle and at 14 hands not a long fall to the ground. But she needed finishing. Her canter was likely to be peppered with a few bucks. Her stopping was a little inconsistent. Off Pixie went to trainer Sarah for six weeks of basic training.

As usual when horses return from Sarah, they are vastly improved and this was no exception. That is the best time to sell them. A truck I needed to pay taxes on, some staggering unexpected vet bills along with Christmas coming fast, made me decide to try to sell Pixie before either Lauren or I screwed up anything good Sarah had done. It is always hard to figure a price and with all the quick interest and even faster sale, you have to wonder if I did not underprice her. I got a fair price from Dee, had paid vet and trainer fees and just wanted to cover that. Still it is hard to let go of the “I should have asked double for her” thoughts running through my brain.

We drove Pixie the hour or so to Pine Hill. It was insanely busy with Eventing starting tomorrow. I really had no clue what Pixie would do amongst hundreds of horses, trailers, riders, kids and general pandemonium. From the minute she came off the trailer to the time we left, she was calm and quiet. I am not sure ANY of my other horses would have done so well. First there was a vet check up, which involved the usual things like temp, heart rate and hoof testing. Pixie had no prior issues but you never know what the vet will find.

Then there was the ever popular, hold the pony’s leg up (one at a time) tightly coiled for a couple minutes then drop it and make Lauren trot away with her. The idea is to see if the pony has sore joints and steps off lame. We had not tried this at home so I had no idea what to expect, but she passed all four feet with flying colors.

Next, we saddled her and took her down to the beautiful, nationally respected cross country course. Gee, one time I had taken Pixie out on the hay roads but never had she seen so much open space, and so many other horses and riders. She was great! By the time we ended I did not care if they bought her or not as I was super impressed with this young pony and her quiet mind.

But in the end, we left and Pixie stayed along with her pretty pink halter we had bought just for her. She will spend the next few days getting to her new home with vet Katie in North Carolina. A forever home. A perfect ending. So why did I still have tears in my eyes as we drove away? I will miss you pretty, pink pony. Head east now to the start of a new life. God Speed Pixie girl! 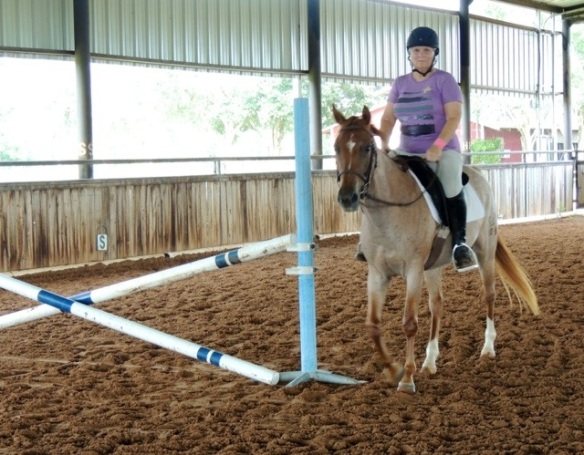 Pix and I at our first off-site adventure