Some lessons are awesome. They start productively and continue to gain ground as jumps are raised or difficulty of lines is increased. Some lessons, like yesterday for Lauren start a little frustrating and end much the same.

For those of us on the south side of Devereaux Sport Horses, it is at least 60 miles to his barn. He has been driving down to us (Have Trainer will Travel) in the southern district to do lessons here the last few weeks. He is off to the AQHA show in OKC this week and running on borrowed time. He asked Lauren to be at the his place (90 miles from us) at 7 am yesterday. We moved things around, I got up earlier than usual and Feather was loaded (God Bless Her!) by 5 am.

Dev’s plan was to work Feather through a grid of jumps that helps teach her how to work through the various demands of a jump course. Adjustability is one of the greatest assets a jumper can have-to be able to speed up and gain ground when able and then to slow down and set up for a difficult line of jumps. Feather is a good, natural jumper but has been only working over fences a little more than a year. When we challenge her with new combinations of jumps, new heights, sharper turns or ask for more speed, she has to be confident that she can do all of those things. Oh, and so does her rider! 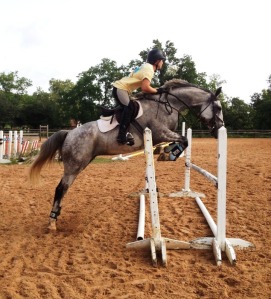 Feather showing a good bascule over this ascending oxer (lower in the front, higher in the back).

Local riding.com talks about the importance of a good bascule. An important concept in jumping is the bascule-it is the way the horse uses his body to clear big fences. A horse with a good bascule is a horse with an extremely round jump, while a horse with a poor bascule may jump flat with his head in the air and his back hollow.

The hollow backs that typically accompany a horse with little or no bascule to his jump tend to prevent the horse from lifting his forearms very high, preventing the tucking motion his front legs need to jump clear. Go watch a training level or itty-bitty jumper class. You will see a lot of flat, fast horses, but when the fences are raised these horse cannot continue their winning speeds.

This will ultimately prevent the horse (unless extremely skillful and strong) from jumping higher and wider. The horse must learn to use their body.  Good bascule is an important trait for all jumping horses, as it helps them to be more athletic over a jump and thus jump higher.

Good training can help to develop a horse’s bascule to its fullest potential, but overall trainers are limited in how much they can train a bascule into a horse. Feather has an instinctive bascule. Grid work, the type Lauren was doing with Feather, is usually most helpful in developing your horses bascule. Certain jump types tend to favor a good bascule, most notably the ascending oxer (like shown above).

Feather was attempting to do what she was asked but was having problems with the tight grid she was trying to jump.  In what is called an in and out, literally jumping one jump, landing and immediately jumping another, it was hard for her to land and be ready to jump again.

I think confounding this issue for Lauren was that her other horse, Mickey, was the KING of the in and outs.  It was his favorite combination, his favorite type of jumps in any course.  He is small.  He is handy. It was easier for him (with his size) to get in and out of small space than a bigger horse. Lauren could always count on a good grid or good in and out from Mick.

There were three jumps in the grid, going up in height as they progressed. It is almost a necessity to be straight into the first two jumps to make the last jump. Feather was not jumping straight. Lauren landed the second jump and pulled Feather out before the third jump. It was a bad spot to be in, and Lauren made a decision to keep the horse safe. However, it was not a good plan because she just taught Feather to run out on a jump.

So, they tried again. And again. It was frustrating both in the heat and after the early start (4 am) to a long day. Feather feeds confidence from her rider. Lauren was not confident at all that Feather would jump. Finally, Dev got on Feather and proceeded through the grid without issue. “Confidence”-he told Lauren. I am thinking Lauren had some other response in mind. Lauren got back in the saddle and successfully (confidently) rode Feather correctly through the grid.

At the end of the lesson, it was more ‘thank God, it is over’ instead of ‘that was an awesome experience!’. Lauren and Feather have homework to set up the grid at home and try again.

It will be an important aspect of this young horse’s training that she learns to accept direction and change in courses. It will be something they try again and try again, until one day we may say “Feather loves the in and outs!”