My immediate family consists of my three daughters, Amber, Ally and Lauren. It has expanded over the years to include my daughter’s families as well. So this is my family now:
* Amber’s family-husband Ryan, three year old son Riley and almost two year old daughter Lexi
* Ally’s family-husband Luke, five year old Jordyn and almost one year old Kendyll
* Lauren’s family- boyfriend Blake and his mother Jo Etta
And of course, my momma and I.

My father was with United Airlines. One of the perks was free travel. As a child, we enjoyed many wonderful trips to Hawaii. I have always wanted to go with my family now, as I did so many times with my family then, back to the islands. On long nights when I laid awake, I would envision us all headed across the Pacific. I dreamed so many times of the plane trip, seeing Diamond Head as we approached the Honolulu and walking the beautiful beaches of Maui.

During one of our family vacations, we all made the commitment to save our collective money and make this Hawaiian dream a reality. At the time we had hoped my momma would be with us, but sadly that wasn’t a possibility.

In the end, we decided on a Maui trip to the same condos we vacationed at when my girls were little. Amber and Ally have made trip before but Lauren had never been. It was more economical to make one stop and easier with all the kids to be in a place with kitchens.

After over a year of planning, saving and dreaming, we headed out of our various homes early this morning. The Houston crew met up with Denver crew in Los Angeles as we hurried to make our tight connection. With Ally’s broken arm, my shoulder under repair and four kids under six years we were a bit of a travel nightmare. I think Kendyll fussed for a few thousand miles.

After a delay in LA, as the airspace was closed so Air Force One and the President could land, the five hour trip to the islands was punctuated by occasional cries but was mostly long and uneventful. Ally and Kendyll got In a little nap. Amber’s kids were pretty content with their videos and games.

It was definitely bucket list time, as we made it to the beach in Kihei, Maui to watch the sunset over the Pacific. Aloha from all of us-I can’t tell you how grateful I am to be here with all my family tonight. 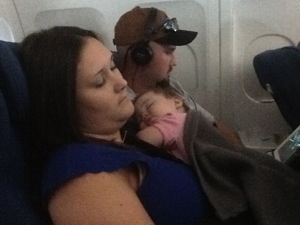 3 thoughts on “On vacation”