We had to leave the much-anticipated, much planned for horse show, days early on Friday when Feather unexpectedly and inexplicably became ill.  She had swollen legs and a bad stomach.  It was like a late blow in already tough fight, we were not ready for it and we could not withstand it.

But what has some time and distance given me in regard to this matter? Well, some retrospective insight, helped along by my friend Kathy.  Really, so much of the why we attended the Fiesta Classic horse show, had already been answered in Feather’s arrival to and participation in classes on Thursday.

We had some concerns.  Not the least of which was would Feather measure up against the horses in her division when we tried to show at this higher level of competition.  Already we had spent some time in these Great SW Equestrian rings courtesy of the schooling shows.  Not only that but Feather had entered the ring and shown against some top trainers and some nice horses-so this was not a huge stretch.  Still, Lauren’s nerves were likely to be bound a little tighter, which could affect the mare as well.

And what was going to happen to my schizophrenic mare who came to us scared to have her head touched, the clippers turned on or her face handled when we added the top down cleaning, clipping and braiding that goes along with a big show?  I was very concerned that getting her mane and forelock braided might undo the fragile balance we had constructed in this horse.

Additionally, making it all a little more challenging, Lauren had all brand new tack, a saddle and a bridle that she had never even ridden in before much less jumped a jump.

But oh, retrospect!  First, we learned that while it was lucky to have a braider that went slowly and carefully with my horse, she stood quietly as almost 50 tiny braids were laced into her mane and forelock.  We learned in our 24 hours at the show that Feather would go into the show ring, despite wind and rain, and jump every jump in front of her cleanly and easily.  While we did not win our rounds, Lauren and mare had respectable courses. It was clear the things we could do to be better the next time they entered the ring.

We learned that she settled quickly and easily into the stall like it was the one at home.  And further, I learned once again, that I am sometimes the luckiest person in the world, to essentially have my vet on speed dial no matter the time of day.  When I needed to talk to Dr. Criner, she was answering my call, personally, and with clear knowledge of my horse.  She had me off to the pharmacy for vet supplies to help the sick mare, before most vets would have even returned my call.  As usual, her advice was clear, concise and competent.  Her advice included “take Feather home now!”

Retrospectively, we proved what we set out to do.  To get Feather in the big ring with the top horses.  We will be back for more rounds in future-you can count on it. 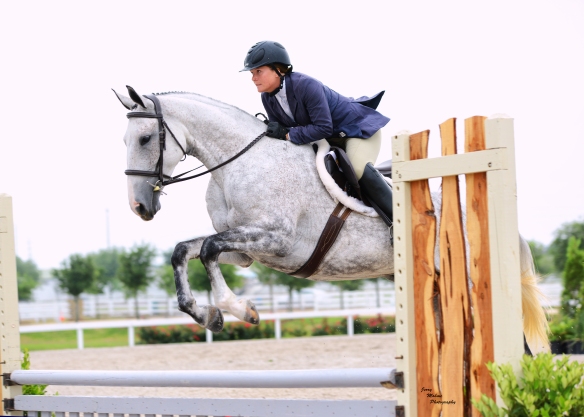 Feather joining the big league with style and grace.