We have had the wild dogs attack and kill our cats.  Now, Mickey has sustained numerous injuries at the hands (paws, claws) of something.  I do not have a big property, just six acres.  While we are out in the country with a sparse population spread across farmland, we certainly are not out amongst the ‘big spreads’ of ranching Texas or the 1000 acres of midwest farmlands.  I expect some deer, coyotes, foxes, and other ‘wild’ life but except for the domestic dogs gone wild incident we have not had any real issues with wildlife.

Apparently, I do now.  Or I might.  Which really is almost as bad.  I do not know, nor will I ever, exactly what happened to Mickey.  But I feel I must take some action to prevent a repeat of what he has endured. 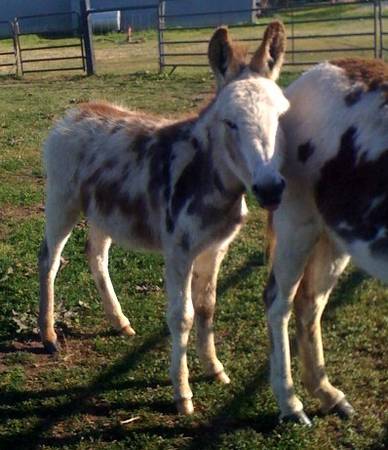 Does this look scary to you?

So, I looked around to see what my neighbors have used to keep their livestock safe.  The answer is donkeys.  Seriously.  I talked to my friend and vet this morning.  She urged me to get a donkey.  I said “Mickey will be mean to the donkey”.    She countered with “Mickey is in no shape to mean to the donkey!”  I must concede that is a good point.

In researching the donkey as a protector thing, I find much has been written on this subject.  Apparently, it is not so much that donkeys know they are ‘guard donkeys’ but more they come to associate themselves with their herd (be it cattle, sheep, goats or horses).  Many donkeys dislike (hate was a word used in an ad I read today) and are aggressive toward dogs, coyotes and foxes and provide indirect protection for other domestic animals.  Donkeys have exceptional hearing, a keen nose  and excellent vision.  They can use all these senses to detect intruders to their pasture.  They will bray, bare their teeth, chase and attempt to kick and bite.  The downside is they may also chase deer, bears (that is okay with me), strange livestock, humans and other intruders in a similar fashion.

Now, if there is some monster cat hybrid thing slipping into my pasture at night, I doubt the donkey would fare any better than Mickey.  But I bet the neighbors and I would hear the attack.  I can hear the neighbor’s donkey braying a couple of miles away.  The article I read also stated they are best suited to protection in small, level pastures.  Well, that is exactly what I have.

My vet, Lynn, told me not to get attached to the donkey.  If they get sick, founder (hoof problem) or other ailments, you do not treat them like a horse (no, driving to A&M with the donkey!). She told me I could find them for free or little money on Craig’s List.  She was right.

There were many ads to choose from offering whole families of donkeys.  Apparently, people get donkeys and they breed like cats. Donkey birth control must not be an emphasis for most ranchers.   Everyone’s ad said they had too many.  I was attracted to the ad for the nine year-old gelding (a male that can’t make babies) who was halter broken and would load in the trailer. I thought the trailer loading aspect would be a good perk as well.   I think Lauren and I will go see him on Saturday.

I was not interested in the “three donkeys-you catch-you haul” ad although located closer to my home.  I had visions of Lauren and I racing around a pasture being chased by crazy donkeys.  And if we did manage to catch one, trying in vain to get a braying, kicking, teeth baring animal in my nice trailer.  No thanks!  Some of the ads showed really cute mini donkeys, but I think if the point is protection, size is important.

These two are free but must stay together. Looks like trouble!

Lauren and I will discuss it some more.  But I think a pasture protection donkey is in our future.   Do you think they make signs that say “this pasture is protected by a Donkey Alarm System“?  This should be the start of all kinds of new stories as we learn how to handle a donkey with our herd of horses.

We have a date with this full size donkey named Jack on Saturday. Bet he comes home with us!