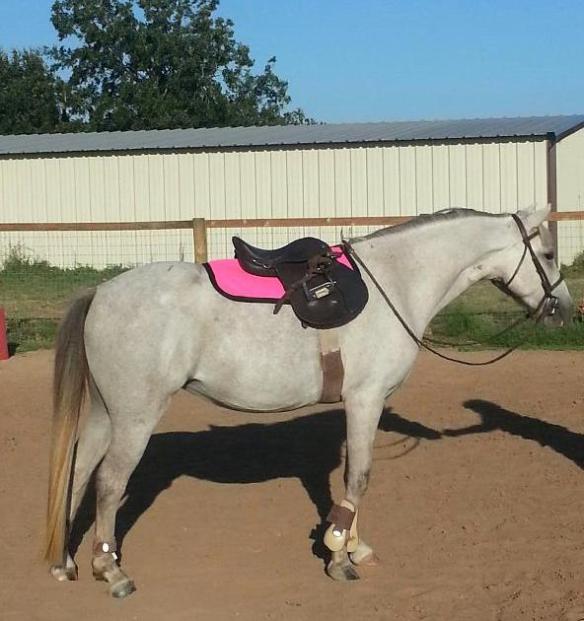 Looks adorable-but has an evil side!

In south Texas, we have been getting the first of the fall rains.  Starting last Wednesday, exercising horses has been hit and miss between the rain showers until Friday when the torrential downpours started that continued through yesterday morning.

The molded plastic support a 12 foot long pole. They can be set at varying heights.

We had just picked up the first of four sets of cavalettis.  These are training devices which can be set at six, eight and 12 inch intervals that help the horse understand where to put their feet and legs when jumping.  At six inches they are little more than a pole slightly elavated off the ground.  But they are the start of good jumpers everywhere and we were excited with our first set.  When the rest arrive we can set up four in a row so the horses can work their way through them in a grid.

From the first steps away from the barn, I knew Mimi had not had enough work in the past week.  She was way too “fresh” as we say.  She didn’t want to be in the arena away from her “herd”.  Mickey was calling to her and she was screaming back.

A little about training-doesn’t matter to me really if we are talking about horses, ponies, dogs or kids, seems to me there has to come a time when some rules are set and subsequently always adhered to.  I am pretty good at breaking young horses and have had some nice ones.  Problem is that I have broken me (and had some existing health issues as well) along the way.  Four fractures, three rotator cuff surgeries and hip replacement in the last eight years, make Lauren a little hesitant to let me go one on one with the horses or ponies when they are acting up. And boy, was Mimi acting up.

Mimi when she first came to us she thought she was in charge.  She pushed, she bit and she did not hesitate to kick. She is small but still a good six hundred pounds. She certainly can run roughshod over us if we let her.  But a few weeks out with the herd of horses (who put her at the bottom of the pack) and lots of arena time have gotten Mimi to understand where she sits.  At least normally.

This particular evening, Mimi was giving me a hard time.  She was dragging me around.  She was trying to turn to kick me.  She took a good bite out of my arm.  I am showing restraint in not posting a picture of it.  We wanted to take her over the cavalettis.  She wanted to go back to the barn.  When Mimi charges me, I get in her face and bark at her.  She backs down.  We try again.

Lauren decided I would probably get hurt and I was not making enough progress.  She came to take Mimi from me.  She tried to lunge her.  You know, where she stands in the center and the pony walks and trots nicely around her.  Oh, boy was that an epic failure.  If I had my video camera we would be rich from the next “Funniest Home Videos”.  It was not funny (Lauren told me so) and it could have been really dangerous, but I have not laughed so hard in a long time.

Lauren got the pony in position with the whip in one hand and leadline in the other.  Instead of moving out and away, Mimi came forward and directly at Lauren.  Totally bullying her.  Lauren put her hands up but the pony just kept on coming.  Lauren turned her back to the pony (which I think in pony language means-“Smash into me now!”) and Mimi galloped toward her intent (or so it seemed) on running Lauren down.  Lauren screamed!  The pony kept coming.  The pony just as quickly whirled away ripping the leadline from Lauren’s hands and running free to the other end of the arena.  Screaming and being scared were like candy to this little bully.  I was afraid (after I helped Lauren up off the ground) that Mimi would remember how she torn free and would try again each time we worked. After all if it worked once, clearly it would work again.

What a mess!  I took the pony back.  Growled at her some more (and illustrated for Lauren how to growl correctly to be intimidating) and got her going around in a circle.  It was not a pretty, concise circle but she was doing what she was told.

It is truly about respect and establishing a pecking order.  If this pony thinks she is winning than we are losing.  We will never get her trained.  So, even though the rain continued to fall, we stayed with it.  Circling Mimi around, asking her to back up, walking her over the new cavalettis.  Then I talked Lauren into getting on Mimi bareback while I lead her around.  When Mimi is considering misbehaving she gives a long shake of her head and then makes a decision if she is working with you or against you.  She decided to accept Lauren on her back (although it instantly could have gone the other way).

I walked them over the cavalettis and Mimi jumped her first little jump with a passenger onboard.  We did it four times for good measure, the last time at a trot.  Lauren stayed on and we called it a night.

Lauren took Mimi back to the barn.  On the way there, not to let the night end easily, Mimi shied at a shovel we had left in the sand pile. I saw her land heavily against Lauren.  Then I heard Lauren growl loudly at the pony and then I saw them both walk on quietly to the barn.  I guess they both learned something.