Short post-Feather didn’t load.  Caroline came down.  We had several great plans, put a chain through Feather’s mouth (she didn’t like it but it didn’t make her load), try running the lunge line through the trailer out the emergency door (we got close a couple of times, she acted like she wanted to do it but would set back and take all of us with her), going quietly and urging her a step at a time (it was less stressful but no more successful).

After Feather had set back a few times at a high speed and in unknown directions, Caroline started to get worried about her daughter, Arianna, being caught up in her hooves.  I got tagged one time with the rope across my shoulders.  We also tried using a twitch (did nothing) and blindfolding her (she sure as hell wasn’t walking forward if she couldn’t see).

We were giving it one last try and we thought we had her.  Caroline was at the emergency door in front, holding the lunge line.  Arianna was behind the trailer door poised to get it shut as soon as Feather walked in.  Lauren was leading her and I was behind her urging her forward.  Lauren moved to the side, I urged her forward, Caroline gave a little tug on the line and she should have loaded.

What happened instead will stay with me always.  I wish I could draw because I have the scene embedded in my mind. Lauren stepped out of the way, moving toward the side of trailer where Caroline was. I was behind Feather as she started to move backwards fast.  The idea was for Caroline to let go of the line so Feather go can backwards safely.  Quickly it was apparent the line was taut and Feather panicked.  I yelled at Caroline to let loose.  She already had but the line was stuck in the trailer door.  Feather moved around the same side of trailer as Lauren was on.  Lauren had slipped to the ground racing to get out from under the dangerous flying hooves.  As Arianna and I struggled to loosen the line, the chain cut hard into Feather’s tender skin and she reared into the air.

In one of those slow motion scenes, where adrenaline and super human strength take over, I watched as Caroline grabbed Lauren and pulled her to safety as Feather struck the earth and then reared again to the sky.  Caroline later said it was one of the most frightening times of her life.  Lauren came inches from being stomped to death, or at least seriously hurt.  As it was two ribs are deeply bruised and a five-inch cut runs down lower leg. 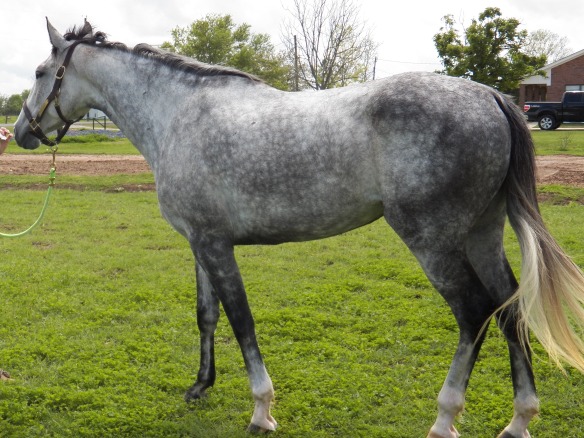 One day she’ll be a champ (and ride in the trailer)I just know it!

P.S.  A week ago, doing the simple act of reaching to halter Leo, I felt my shoulder snap.  I think there is little doubt that for the fourth time in as many years, I will need shoulder surgery.  Boy, is Dr. Nolan going to be mad at me!  And thanks to all that prayed for our safety, the first thing I did after I finished ranting and raving was Thank God for being with us all.