Through the years I have learned that your children’s activities determine your friends.  You may of course have other friends, but no matter if it is hours spent at the barn, the swimming pool or the ball park, friendships are made there and often they endure over time.

When we moved to Florida Amber played soccer and softball.  We were brand new to the community and her dad was willing to help coach.  Immediately, we gained a family.  We are still close with Amber’s best friend from those days, Jenny.  I noticed on Facebook the other day that Jenny, now living in North Carolina, was voted “teacher of the year” (way to go, Jenny!) and not only did members of my family in Texas and Colorado respond but old members of their ball team did as well.  Sports create families.

The Bergs were/are terrific friends and have supported the girls and I through our moves, attended the kid’s weddings and congratulated me on my grandchildren. We have shared joys and great sorrow.  All because we met at a ballpark.  It is that spirit of camaraderie that is fostered by the endless hours thrown together sitting at the games, waiting for the games or traveling to the games.  I am certain that if you do not like someone at the ballpark (pool, barn) you will not like them at your house.  It has been a good test for me.

In Florida, as Amber moved on to college, the rest of us moved on to horses.  Ally met some of her best friends at Wickham Park.  We are still in touch today-14 years later.  I know the whole social media thing helps but we had common loves, common interests and common memories.

Here in Texas, we made our first real friends at the Diamond C Training Center.  We had just gotten Kid and Mickey.  We spent every day there for several years.  The kids grew up with a large surrogate family -it was like having cousins, aunts and uncles.  They learned about competing, sharing and working hard.  Ally had her first job there.  So many of us are still friends today including Anisse, Rachel, Karen, the Herffs, and the Davangs. We still support each either and praise one another’s accomplishments-whatever they are now.

When I had my hip replacement, we needed to move from Diamond C to somewhere I could have daily care for my horses and Lauren could have her trainer available when I was not.  Lauren had been riding with Dianne for a while and we made the move to Whipple Tree Farm.  Ally was less involved by this time-moving on in her life but Lauren and I were more absorbed than ever.  WTF (probably not the best acronym for a barn for children but who knew?) became a second home for Lauren.  Even though we have been gone five years now, her dearest and best friends were/are the girls she grew up with at Whipple Tree.  Lauren’s friends that she made there are too numerous to list, but Megan and Caitlyn are especially close to her.  Recently, I learned that Megan was still giving Lauren relationship advice, from Canada where she has lived for many years now.  They remain close friends.  I would be missing part of the story if I didn’t say that Dianne is one of my truest friends-we have struggled through our mother’s issues, shared our daughter’s issues and sympathized about our horse’s issues. 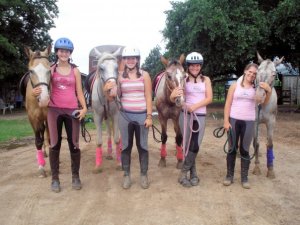 At Whipple Tree, (from left) Stefani, Cara, Lauren and Megan

Part of it was Dianne’s special summer camps.  Nothing was looked forward to with more anticipation than summer camp-especially overnight camp.  Those times helped bring together friends for life.  Dianne, herself, deserves big kudos for providing the kids with an environment that was safe, fun and mostly, drama free (as much as anything can be with kids).  Even today, the kids come, take their lessons, ride multiple horses, eat lunch, hang out and their parents come get them at the end of the day.  In a world of dangerous predators, it is a simple day in the sun filled with horses and fun.  Lauren and many of the girls have grown up and moved on. But they still support each other and applaud each other’s latest victories.

It is the shared stories.  The -do you remember when the team from Norway used the “F” word in their softball cheer at the junior Olympic game at Cocoa Expo?  No one will forget that one.  Or reminiscing about how many of the girls fell off a fat white pony named Snowboy.  Or the time Secret flipped over the fence when Roland was trying to shoe her? So many great times with a shared love for an activity.

We are truly formed by the friends we make.  I would have never dreamed that I would form a friendship on the ball field that has lasted over 18 years.  Nor that after 12 years in Texas, my closest friends are my barn friends.  It is the shared times, the shared stories, but as I am reminded again today by my friend, Gaylyn, it is about our shared dreams.