There are many forms of manipulation.  I have eagerly utilized many over the years to get my kids to do what I want them to do.  For instance, a two-year old is better with the choices “do you want a bath with bubbles or without?” because either answer gets them in the bathtub.

I have manipulated my daughters with offers of clothing, dogs and horses (depending on my need for their compliance).  Certainly, I have been manipulated by them and others over the years.

And then there is the actual physical manipulation.  Like when you visit the chiropractor.  I have gone a few times.  I have friends who swear by their chiropractor and relish a visit to get corrected.  I have had so many actual broken bones that I have somewhat shied away from chiropractor on the grounds that I need to protect my fragile bones.

Over the years, I have had my horses worked on by a chiropractor.  Seriously. The doctor (usually a people chiropractor that started working on horses) would come to the barn, stand on the back of his pick-up truck and proceed to snap, crackle,  and pop the horse into better form.  It made sense that the horse could suffer from the same issues we people do with their spines, necks, shoulders and hips.  I know many equestrians who have regular chiropractic visits for their mounts.  I had one dramatic time when my old horse Kid, had been lame on his front leg for months.  One visit with the chiropractor and he was good as new.  It makes you a believer.

We bought our horse Leo a year ago.  He did pretty well when he was doing the basic walk, trot or canter (or so I thought) but when jumping, he was a mess. He threw his body over the jump with no control over his limbs.  In horse shows, audible gasps could be heard from the crowd because of the way he jumped.  Unlike our horses, Mickey or Feather, who are lovely to watch over fences, Leo was all (if you will forgive the expression), asses and elbows, if that paints a good visual for you.  He showed an incredible ability to get over any jump we put in front him and he was always willing to try but it was not pretty to watch.  We had decided that while Leo was a great guy, he ate a lot, more than any other horse we own and he was not moving ahead with his training program.  He went to Camp Dev this winter.   This is a special time for the horses when they get the undivided attention of our trainer, Dev Branham.  They beg to come home to the easy life.  Dev didn’t have much to say for Leo except that he just couldn’t use his body and he tended to just fall apart when cantering or trotting.

We put Leo up for sale.  People would call about him but we would always find various reasons why they would not be a good owner for him. I think we made excuses to keep him.  While I have a sense of responsibility about my horses and do not want them ending up at an auction or dead as horse meat somewhere there have been some good potential owners that have come to see him and we have just rejected them.

My friend and veterinarian, Dr. Lynn Criner, had told me she was doing advanced studies in myofascial trigger point release and chiropractic equine medicine.  The word myofascial means muscle tissue (myo) and the connective tissue in and around it (fascia). When stressed or injured muscles form trigger points, like contacted knots, which can cause pain and tightness.  In addition to the usual horse chiropractor, she is also a hunter/jumper rider (so knows the body mechanics involved) and she is a vet so she intimately knows a horse’s anatomy.  I considered it a big step ahead of the regular chiropractor.

I figured I might as well book a visit and see if anything could be done for Leo.  I had nothing to lose and great horse to gain by giving it a shot.  When Dr. Criner first examined Leo he was immediately and obviously sore along his spine, pelvis and pole (the top of his head).  And just as obviously, when she did certain trigger points on him, you could just  visibly see him relax and if horse could sigh, he sighed.  Then Lauren rode him so Dr. Criner could observe him.  Looking at him from the rear, his tail hung sideways (not straight) and his hips were seriously uneven.

Now comes the stupid part.  I thought the horse moved pretty well. I have photos where he looks pretty good.  But the minute she pointed out the errors in his movement, I clearly saw them.  His poor right side swung in and across his body to compensate for whatever issue he was having.  If and when he did move well, it would ultimately fall apart as he could not sustain it.

After seeing him ridden and jumped, Dr. Criner set out to correct Leo.  In a series of manipulations and trigger points, Leo stood before me, squarely on all four feet.  You are saying of course, he stood on all four feet-that’s what he has, but prior to this he would not stand square with his weight evenly distributed.  He would lean on hoof or another.  She worked on him over an hour.  There were the snaps and pops that I associate with chiropractic manipulation but there were also the huge and immediate relaxation of muscle and sighs of when something just felt right.  He was the best of patients for her (thank God it wasn’t Mickey because he would have never gone along with all the helpful therapy).

Two things I would note-when Leo came to us, his chest had been hurt.  One side of his chest was clearly larger than the other.  As his injury healed, the disproportionate size of his chest did not change.  I assumed it was swollen and just never got better.  Dr. Criner said his sternum was out. She manipulated it back.  Immediately, and for the first time since I have owned him, his chest muscles were equal on each side.  Likewise, a lot of horse don’t like their ears or the top of their head touched.  Leo is vey tall and easily would stretch away from my touch.  Again the doctor said this area was in need of adjustment.  She stood above Leo on a four-foot step stool (I know I should have taken pictures) and manipulated him.  Down came his head, he started licking his lips and sighed loudly.  Today, I can easily touch his ears and his head.  It doesn’t hurt any more.

Although he is so much better, it will be awhile before we will see if we can re-train him to use his body correctly.  For so long he has compensated for his problem with poor body mechanics that it will take some time for him to learn it is not going to hurt if he does what nature intended for him to do.

He worked as well today as he has ever worked.  Tomorrow we will start some exercises to teach him to jump right using his body.  And we will see.  In this case, a little manipulation may have a big pay-off.  Thanks, Dr. C! 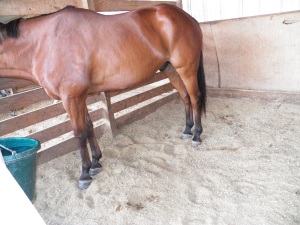 See how his back legs are even and parallel? Never before could he stand with his weight on all hooves and evenly distributed.