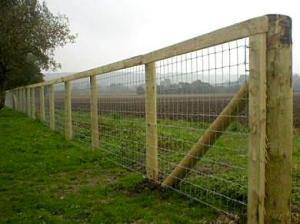 After over nine months of waiting, I have a new fence along the front of my property and along the front of my arena.  I put the fence in five years ago but between last summer’s drought that loosened all my poles and with horses getting their hooves stuck in the wire, my fence has not held up well. I have been worried as line after line of wire has broken or come loose.

I had nine months of waiting for the fence man to call me back.  The fence makers in my town are busy.  There may be job issues in other places but it seems in this town, no one (remodelers, painters, plumbers, fence makers, sand delivery men, or any other type of handy man) is ever eager for additional work. They are all busy.   Must be a good position to be in.  The guy who fenced my back pasture has been telling me he has had “cows to move” .  He told me that in the summer, in the fall, at Christmas time and again this spring.  Where is he moving all these cows?  These are busy cows.

So, finally I got a referral from him to another man who was too busy building fences for others (at least he wasn’t “moving cows”) and he gave me a third referral.  After three weeks, the third referral fence man came and I got my new fences up.  I must say it was almost worth the wait.  He was a perfectionist and it looks great.  My cats were first to try it out.  It created a sort of gymnastic track for them.  Everyone worries about exercise now, you know. 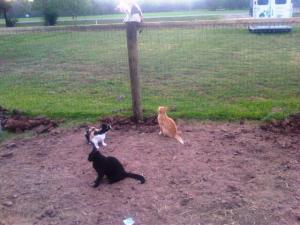 Chloe doing her daring high-wire act on the new fence for her cat audience.

Fences, a sturdy one like this, are imperative when you live just off a state highway.  In the last five years, our horses have gotten out, through or around the fence a few times.  These episodes have included me racing manically up and down the highway trying to lure them back with feed, while praying cars wouldn’t hit them or me.  I had chased them a mile or so down the road, when they all suddenly reversed and headed back toward home.  I was closing in on a capture as I had almost caught Mickey when my 90-year old neighbor came out to the road. He was armed with a broom which he waved athletically at the horses.  The horses, reversed again and headed away from home at a gallop.  I am hesitant to admit that I cussed the old man out for scaring off my horses, but I was more than a little bit crazy.  Eventually, I caught up with them and got them home safely.  The old man died soon after that, but I am pretty sure it was unrelated to our adventure.

The horse escapes have included me being at work and overhearing co-workers talk about these horses that got loose and were trashing some farmer’s cornfield.   Out of curiosity only, I asked what the horses looked like, and of course, they were mine.  By the time I got to where they were being held, they were loaded all together (four of them jammed in a stock trailer), terrifed and white-eyed.  I was actually stunned that Mickey had loaded in a trailer.  That was amazing in itself. There were three sherriff’s cars there.  I guess it was like a local crime spree.  It cost me $175 to get them back that day.  When I hesitated about paying, the sheriff offered to take them to the auction barn.  Still, better than dead.

In yet another escape attempt, I was chasing them across my other neighbor’s property when she popped her head out of her house to speak to me for the first time in three years to tell me to get the horses off her lawn.  Really?  Did I look like I was willfully sending them across her lawn? Here’s the thing, Lauren weighs 120 pounds.  Mickey over 1000 pounds.  If he decides he is going, then he is going. 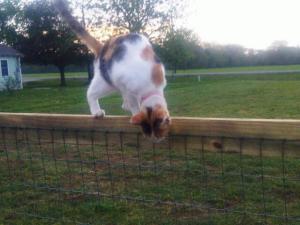 Chloe-daring to look down. If only the fence kept the cats off the highway it would be perfect.