Aliases:  Many and colorful based upon his demeanor at the time.

Best Traits:  Mickey loves to jump. Mickey under saddle is typically easy to ride and handle.  Mickey on the ground-not so much (see worst traits). Mickey-when he is on-is extremely difficult to beat in the jumper ring at a height of 1.0 meter (approximately 3’3″).  Makes us put up with the way he behaves the rest of the time.

Worst Traits:  Mickey, I think is a bully.  If he were a kid, he would be the mean kid.  He kicks.  He bites. He has been known on many occasions to bolt from his handler. He is an ass.  For years, he refused to load into a trailer-just didn’t want to go.  Made him hard to take to shows. For years, Mickey fought being bridled.  Made him difficult to ride.  Mickey didn’t like his ears clipped or his face washed.  Fortunately, with age, he has gotten better.  He has accepted the trailer, the bridle, and the clippers.  He still kicks, bites and hates having his faced washed.

Background: While Mickey started his life well-off and well-behaved in Bartlesville, Oklahoma even showing as a two-year old in Oklahoma State 4-H, before life intervened to land him as a sullen five-year old at the Houston horse rescue.  He refused to walk a step forward for three weeks, then Sarah Petty convinced him to start over.  I spotted him and wanted him for Lauren.  Their first meeting was less than perfect (she threw a spur at him and left in tears).  But we brought him home anyway and he gave my young daughter something that was hers and something to believe in. I truly believe he brought Lauren back from a very dark place.  As much as she saved his life, he saved hers.

His life at Six Meadow Farm:  Lauren and Mickey did their first horse show in 2004 in the walk-trot over poles division.  They earned their first-first place! They were reserve champions for the division.  Since then while not perfect partners-as Mickey feeds off Lauren and Lauren off Mickey-they have earned year-end titles many times over, many Grand and a lot of Reserve championships.  Mickey moved to the jumper division where the winner is the fastest horse (not necessarily the prettiest, most correct, or most perfect).  He is small for this sport at just over 15 hands.  But he can jump, he can turn and he is quick.

At the farm, Mickey has taken over the herd from Mr. Kid.  He is the king.  And deservedly so. He has Lauren’s heart and no other horse has ever began to mean to her what Mickey does.  She could have ridden better, faster, stronger horses, but she picks Mickey.  He is her man. From the rescue to the United States Equestrian Federation Zone finals, he has carried my daughter to victory more times than not. 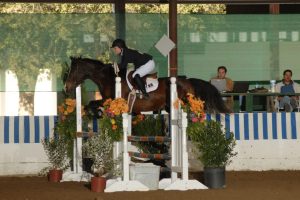 Mickey and Lauren making it look easy-flying through Zone 7 finals-2011.