I have been more than a little obsessed with Rich Fellers and the Irish Sporthorse Flexible since his big win at the FEI World Cup in 2012.  This horse has more heart and desire to win than any horse I know and has come back from three potentially career ending incidents- to compete again at the highest level of show jumping.

My bucket list included bringing up some babies, including having at least one born at my own farm.  I have had the tremendous opportunity to bring along Betty Sue (Special Occasion GES) who I snatched up the minute I saw her baby picture (who wouldn’t?). 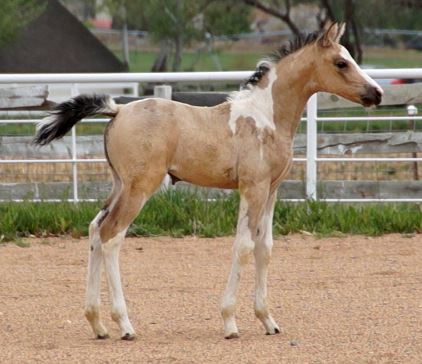 Then we had the birth of our Flagmount horse, Sims (Flagmount’s Semper Fi) three months ago.  Another seemingly good plan as he is a big boy and should mature into a promising jumper.

My dream was to have a Flagmount/Flexible baby; uniting some of the best Irish blood there is.  We even talked to Olympian Bernie Traurig about it after he had coached Feather in a couple of clinics.  He knows Flexible well, too.  And he had worked with Feather closely. After hearing of our plan to breed Feather to Flexible,  his words to me were-“let me know the minute that baby hits the ground”.  Those words were pretty inspiring.  But we did not want to take Feather out of work for a year to have a baby.

SO–if I couldn’t have a Flag/Flexi baby then what?  How about a Fargo/Betty Sue and Flexible baby?  Say what-Betty Sue is a little young don’t you think?  Well, yes she is but what we chose to do is use Fargo’s daughter and Betty Sue’s mother, a pretty horse named Silhouette GES,  as the mother of our Flexible baby.

My friend Stephanie at Golden Edge Sporthorses( http://www.goldenedgesporthorses.com/ ) in Colorado graciously has offered to let us breed to her mare and to care for Silhouette during her pregnancy and in the baby’s early days, sending him/her on to Texas when weaned.

This will bring strong German lines to Irish ones hopefully adding a little height to the Flexible side. Many decades, perhaps a century, of strong jumping on both sides.

It is official.  We had a sonogram with a heart beat yesterday.  YIPPEE!!   Three’s definitely is a charm.  These three babies should keep me busy for the next ten years or so. 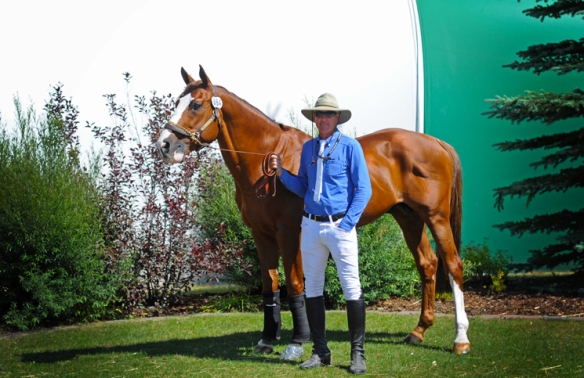 Flexible above showing how to fly.  Here with rider Rich Fellers in Spruce Meadows.

Some detail on the parents-

Flexible is the small but mighty (15.3 hands) 1996 chestnut Irish Sporthorse stallion that I have admired for so long.  He is by the Irish stallion Cruising (16.2) and out of the Irish Sporthorse mare, Flex, by the thoroughbred stallion Safari. He has had an amazing career spanning now into his 20th year, which is quite a feat for a Grand Prix horse.

Noelle Floyd said in her recent article; Past, Present, Future: Flexible–“For eight years, Flexible has been winning at the five-star level of show jumping. Eight years. It goes without saying that the 20-year-old Irish Sport Horse (Cruising x Safari) and his rider Rich Fellers are no strangers to the international level of competition. The stallion’s partnership with Fellers stretches over 14 years in total, with countless wins and successes too numerous to list, with standout moments such as their 2012 FEI World Cup Championship and London Olympic Games appearance (as the highest placing US horse and rider).

Just this week, Flexible and Fellers finished 3rd in the $35,000 ATCO Energy Cup CSI5* at Spruce Meadows, proving that they are still going strong, competing at top venues and trumping the best in the world.”

Silhouette GES is a 2010 perlino RPSI mare by the imported 16.2 hand perlino Czech Warmblood stallion Sagar, out of the 16 hand palomino RPSI mare Blonder Reflection (my horse-Fargo).  Her sire Sagar is a remarkable young stallion who has inherited his incredible scope over fences, lovely gaits and fantastic conformation through successful competition bloodlines that includes the famous Holsteiner stallion, Landgraf I.  Her dam’s sire, Blonder Hans, is a 16.3h, palomino registered German ZfDP stallion.  Blonder Hans has three spectacular gaits with fantastic elasticity and impulsion. He also excels at jumping with beautiful form.  Silhouette is a lovely mover as well.

Here are a couple of other blogs I did on Flexible.

As always, thanks for riding along and watching dreams unfold.