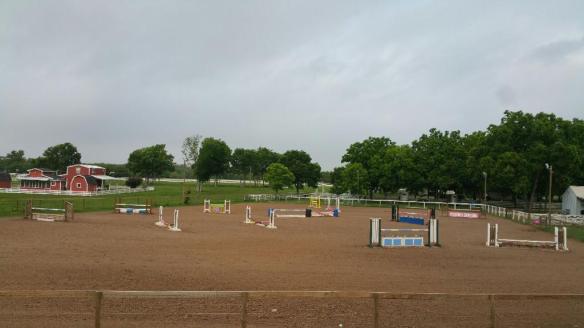 Quiet, private and peaceful? Somehow I don’t think so.

I know.  This is a difficult statement to conceive of after some 18 years of being divorced and not having a man friend, which is even more ironic as my ex was always certain I was going to divorce him and run off with one of the doctors I worked with at the time.

But yes, I have re-ignited a relationship with a friend of mine from long ago.  You know Facebook is a marvelous thing.  You can check out how people have aged and what they are doing.  It seems to have worked for us.  Which is even more amazing given the crazy pictures I tend to post with me standing in water troughs or with tutus on my head.  Could be why it has taken 18 years to get a date.

Anyway, so we have been planning this little get-to-know-you again trip for a while now.  I wanted it to be low-key.  And even though, Lauren is off to the boyfriend’s most weekends, I confirmed that she would be gone.  I wanted some quiet, private time to introduce the six dogs and gazillion horses to a non-farm person before adding in extra people.  In fact, I had it all planned out perfectly.

Then Ally called this week to ask what time they were coming over on Saturday.  I searched my mind to remember what we were planning on Saturday.  “What are we doing?”, I asked.  “We are coming over to meet your new boyfriend”.  Not what I had in mind.  Then she reminded me that her husband had volunteered to fix our horse’s run-in shed on Sunday.  They would all be there all day and could I babysit Jordyn and Kendyll for a while? Why not?

One of my favorite boarders told me they might just be there Friday night when we get in from the airport, just in case we need help getting the horses out.  Oh, and she is going to whip up her famous Tortilla Soup so we can have dinner all ready when we get back to the farm.  Gee, perhaps her family can set the table and dress as waiters and serve us wine.  (Honestly, I love the soup and am very grateful, but wow!)

Meanwhile,  I learned that another one of my boarders and her boyfriend will be there Saturday to build jumps.  We need new jumps.  It is very nice of them to help out, but this weekend?  The mower guys called to re-schedule to Saturday as well. That will be so peaceful.  Looking out over the green pastures with the mowers and weed eaters running in the wind coupled with the electric saws and hammering. Idyllic.

Awesome. Lauren told me that she and Blake needed to come by because Blake was going to install the electric gate opener (which has been in a box in the garage for almost two years).  Really?  “When is that going to happen?”, I asked.   “Oh. on Sunday.  We have Dev coming to do lessons too!”  Lauren told me.

I think that should only be about six riders and their families hanging out on a fine Sunday morning as Luke builds my run-in shed and Blake installs the gate opener.  I feel pleased that everyone is so sweet and cares so much.  This is truly a monumental event.

I finally gave up and planned a nice picnic type lunch for Sunday noon.  Ally’s in-laws want to run by as well but they will wait until Thanksgiving.

Three year-old Kendyll was over this morning as I getting ready for work and doing the last-minute cleaning of the house.  She was happily standing in my shower stall surveying what I was doing.  “Maybe when my new grandpa comes we can put on our bathing suits and take a shower.  Then you can go get cupcakes and we can have a party!”.

You know, Kendyll, we might as well.  Let me know if anyone else wants to run by and check out the new boyfriend.  We will be at the farm.