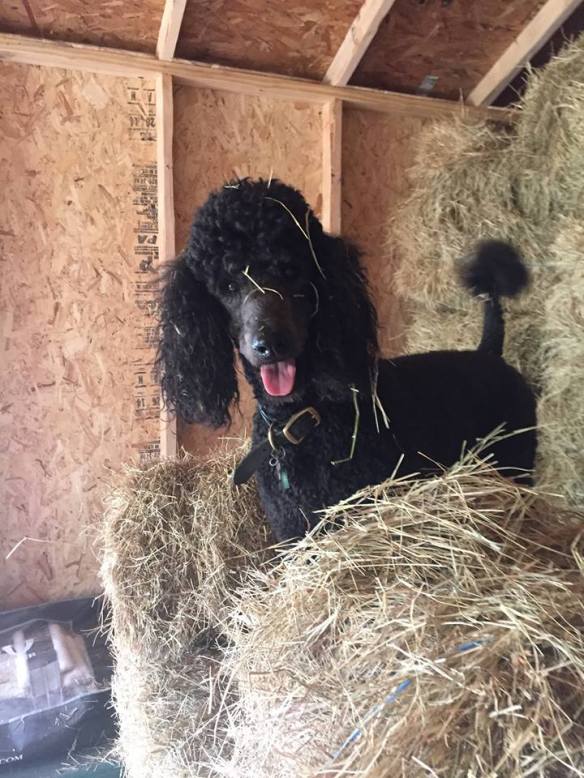 Happy Kona on Mother’s day “helping me” with hay.

I guess that title is a little too dramatic.  I do regret that I have not written.  It has been too many days.  There have been ups and downs which we will discuss, but I promise to make every effort to write at least two, hopefully three times a week.

It is over a year now since we landed in this new house, built new barns, arena, got new horses, lost some dear animals and met new friends.  Our boarding and training business (which right now is limited to training our own steeds) has grown in size and complexity.  A year ago we fed two types of feed and offered two kinds of hay. Now, seven cans of various feeds sit in our feedroom with three kinds of hay (coastal, alfalfa and timothy).

Our horses are a varied bunch with the three original rescue horses (Mickey, Cody and Snow), three ponies (Molly, Snow, Piper), three OTTBs (Hershey, TryDelta (off-site) and No Play), Two Paints (Mickey and Nova), Five warmbloods (Prosecco, Kinnaras, Betty Sue, Fargo and Feather) and one Grand Prix Dressage horse (Kinnaras).  The range in size from 13.3 hands to 17.2 hands.  You will note some horses are counted in multiple categories. Point is, it is a busy and diverse crowd.  I might be in the tack room looking for a 22-inch western girth for Piper or a 54-inch English girth for Nova.

It certainly has become more than a fulltime endeavour for us.  I have not been gone on a weekend from the farm since we moved here, except for my mother’s funeral.  Lauren does a nice job with much appreciated help from her sister Ally in managing the daily activities.  That leaves me, and often Ally, with night-time and weekend work.

Thankfully, Alex, Libby, Isabel and Jo Ann all pitch in to help out with stalls and feeding.  There is never a spare moment.  Remember too, that I have a corporate fulltime occupation with little tolerance for less than my best job performance. It makes for non-stop activity, at least for me.  Reason enough to be out of my mind, but I totally try to balance all the work, every day, every hour along with some occasional play

Lauren budgeted for five horse shows for this year.  They are expensive and we have limited funds for the big shows.  This week’s MayFest has traditionally been a great show for us. Last year, Feather made her first run at the 1.05 meter and earned three ribbons in three classes.  Mickey has always been the king of the fest winning multiple championships.

Wednesday, I headed to the arena with baby Betty Sue (who at over 14 hands is not so babyish anymore) and pony Piper to give them some play time.  Lauren was going to ride, had gotten Feather out of her stall and strapped her in the cross-ties.  I let the little ones loose and off they ran!  Feather, never being so sturdy of mind or space, immediately wanted to take off with them.  She set back in the cross-ties, rearing and slamming her face multiple time into the sharp tin of the roof.  Finally, she broke free and proceed to run to the arena with blood streaming down her face.  Like go to the vet now blood!

What you don’t see-her eyelid had to be sewn back on.

The vets thought that Feather could still compete at the show but the swelling did not recede as fast as we hoped.  Lauren took Mickey for Alex to ride and agreed to show him for her on Friday while Alex was at school.  I had been apprehensive about this.  Mickey and Lauren have a long, dramatic history of Mickey throwing Lauren to the ground.  Mickey performs better for Alex but I was still scared.  Lauren jumped him four feet at home to show me they were great. They would only be doing the .90 meter (which is about 2’9″) at the show, what could go wrong?

Mickey was reluctant to jump the oxers from the beginning.  Lauren was in the class for the win and pushed him up to each jump, setting him up well and using her crop as needed to tell him she was serious.  At jump seven, Mickey galloped right to the base of the jump and did a sliding stop to rival any of his paint horse reining relatives. Lauren went flying through the air like a lawn dart hitting both poles with her head before stopping.  And this is why Lauren does not show Mickey any more!

A slight concussion and stiff neck later, she went and scratched Feather from the show.  I am all about pushing on, but when your horse has a face full of stitches and you have been a human lawn dart, it is time to say you will wait for the next show, thanks anyway!

Saturday, unexpectedly with no show to show in, ended up to be a fun day for Lauren, Jordyn, Kendyll and I. We took Kona and the new poodle Maui Jim with us. We went by the show and checked up on Mickey and Alex.  It was Maui’s first horse show and he was great!   We left soon after headed to the expansive George Bush Park (of course, Houston would have a George Bush Park, and the dog park is called…wait for it…The Millie Bush Park after President Bush’s cocker spaniel).  We did not go to the dog park (we kind of have that at home) we did go on a hike down to a pond and let Kona and Maui see what they thought about water.  I have never had Kona to the water although Poodles are known as water dogs.  The sign clearly said no wading, no swimming and no off-leash dogs because alligators could be nearby.

Still, I threw the stick out in the water and Kona and Maui bounded out in search of it.  Maui got out a little further than he intended and had his first swim.  He did not go back in the water.  The girls had a fun time wading on the sandy beach until we actually saw an alligator and thought it would be a good time to put everyone’s shoes back on.  I managed to fall fully in the water trying to balance on a log going over the trail.  Lauren was laughing so hard she almost dropped Kendyll.  The dogs just stared at me like I was stupid wallowing in the slime on all fours like a common dog. 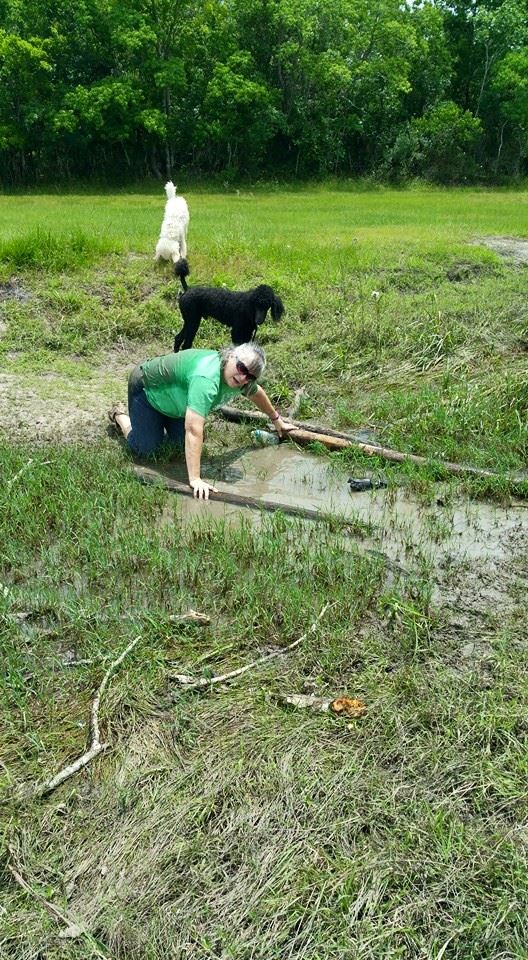 Totally covered in slimey water and unable to get my feet under me and get up.

So you can see I have a lot of reasons for insanity.  Plus it runs in my family.

Thanks for riding along!  I promise more wonderful days of action from the farm.  If you are on Facebook, look up Six Meadow Farm and see some more pictures of our place.  We have a spot for a new boarder, too!  Think how fun that would be!

2 thoughts on “I regret my absence, I have been out of my mind”