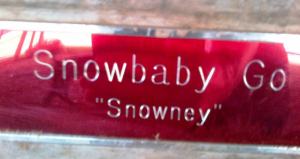 Getting Snow’s stall all set for his return! If you look carefully you can see the poodle’s reflection.

As the hot summer days continue (no rain since Fourth of Ju-LIE-as my momma would say), the heat index has tipped over 100 each and every day, Lauren has been readying the barn for the Snow’s return.  In some sort of manic phase of activity, Lauren has stripped the hay stall, cleaning out cob webs, moving hay, moving pallets from stall to stall, leveling the floor, adding dirt, adding rubber mats, and (are you ready for this?) changing out the gates herself.

I was actually, shocked!  More of her father’s genetic code must run through her system than what I thought.  I did not even know that she could possibly take down on six-foot gate and replace it with a four-foot stall gate.  We keep the hay locked behind higher walls and higher gates.  So, Lauren had to remove the boards from the stall that will be Snow’s and then cut (with a saw) the boards to fit the new hay stall.  I was just amazed.

I think Jordyn is going to be thrilled when we surprise her with Snow’s return to Six Meadow Farm. The stall is not done yet, we have a fan to install, plywood to set in the back of the stall and of course, shavings.

Dev suggested that next weekend when we have a horse show that Snow is attending, that we just take him home then.  That will save an extra long trip to Dev’s to pick him up.  We had planned to bring Jordyn down for a lesson on Labor day weekend and just, SURPRISE! Snow was home.  Ally and her kids are headed to Denver to help Amber and kids celebrate their birthdays so Jordyn won’t even be in town when Snow gets here.  Hopefully by the 21st or so, we can get the big surprise done.

Meanwhile, I am continuing to work Pixie in hopes of turning her into an all-star hunter pony.  She has been a little reluctant to work hard with heat.  She has been getting extra time on the lunge line.  I decided to try her over a small jump.  She is young and never been jumped with a person on her back.  She jumped the first time I asked and each time thereafter.  We are going to get Dr. Criner out to check her alignment, back, and sternum.  She does not like her back feet worked with and is still mareish when I tighten the girth. 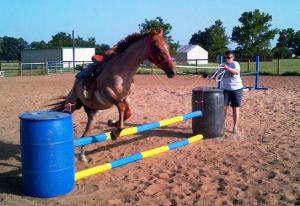 Not perfect, but her first jump in Texas. She was totally willing to do whatever I asked.

DC will look at Bruno as well.  We have scheduled Bruno’s first lesson at Dev’s.  Lauren was telling farrier Roland last night as he marveled that Bruno still had his cast and shoe on, that she had ridden him eight times in the last ten days-and that was more rides than we had ever had since we have owned him.  He seems to be getting physically stronger and easier to handle each time they ride.

Roland was watching him last night as he finished up with the horses,  “He really is a great looking horse, I hope he does great things”.   Ditto, Roland, Ditto.

Thank you for riding along.  Going out  right now (temp just dipped to a cool 99 degrees) to ride Pixie, Feather and Bruno.  Good night to all of you!