I wrote Monday about Bruno’s lameness. Today is Saturday, here is a short update of what happened this week:
* we started Bruno on bute (an anti-inflammatory drug)
* Tuesday, he was walking better but was still lame
* Wednesday Bruno was lying down, unable or unwilling to get up, so lame he could barely walk
* We started treating Bruno for a hoof abscess, soaking his bad hoof in Epsom salts to try to draw out the infection.

Bruno, no doubt a veteran of the hoof soak process, stood quietly.

* Thursday our local vet team got here to gently coax Bruno’s shoe off the infected foot. They did not want to damage any of the newly grown hoof. Bruno got a big injection of more anti-inflammatories.
* Friday after much discussion with both our vet Dr. Criner and our farrier, Roland, we determined we would shoot x-rays this morning.

Today started with radiographs of Bruno’s front hooves. He behaved well for the front feet but was not interested in having his back feet photographed. We will do that another day.

Setting up for the x-rays.

Later this afternoon, both the doctor and farrier returned. After reviewing the images, the doc wanted to see how Bruno was moving and how it affected his hoof. Dr. Criner needed him to move on the flat, unforgiving surface of concrete. She suggested using the highway (eh, no way!) and then the neighbor’s driveway. I got permission and the test was on. Dr. Criner ( because she is tougher than any of us) placed a chain in the ex-racehorse’s mouth, covered his hoof in duct tape and headed down the drive. The duct tape clearly showed that Bruno was striding in such a way that most of the impact was hitting on the damaged coffin bone, and the weak, outside of the hoof.

The next task was to find a way to support this hoof as time allowed it to get better. All of this was new to me. Based upon the x-rays, the hoof was trimmed. A new heart bar shoe was custom designed by Roland (Lauren thought we were cooking hot dogs, but we were making shoes). Then, casting material was used around the hoof to support the fragile hoof wall and allow the nails to have a place to rest other than the hoof.

Next, was a custom fit pad to absorb the shock of the hoof as Bruno bounded down the arena walls. Finally, after re-shaping and molding, Bruno’s custom shoe was done.

The new heart bar shoe, with pad and cast. 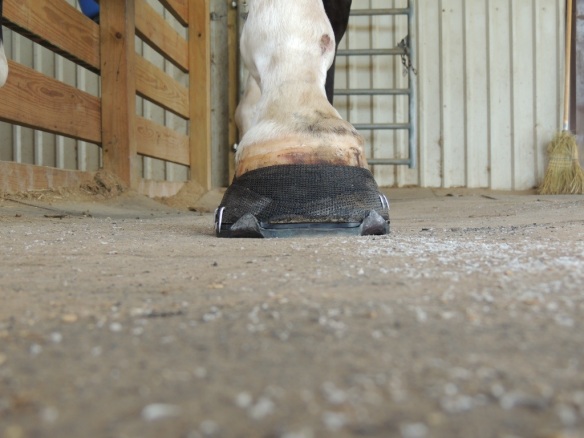 And finally, the jog for soundness. Off Lauren went, dwarfed by Bruno, moving beautifully, with just a hint of his old injury.

We still have several months of re-hab left. But the vet that diagnosed Bruno’s injury right in the first place, got him on the road to recovery with TAMU vets, appears to have made some good decisions for our giant OTTB Bruno. I am grateful for our new path forward, and grateful to Lynn and Roland for giving up their Saturday to get this horse pain free again.