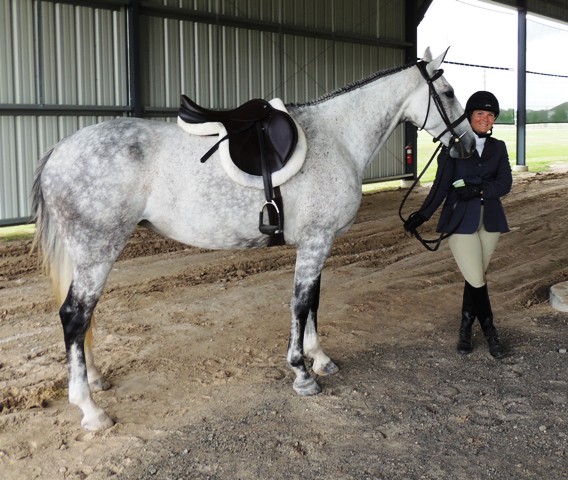 I believe in God.  I believe that God guides my way.  I also believe that I need to push on when I am given challenges.  I do not give up easily.  But with that said, there comes a time when one is just stupid to try to push on.  It is like the old story about the lady on the roof with flood waters all around her.  People keep coming to rescue her and she keeps telling them ‘no, God will provide for me’.  Well, sometimes he is right there helping us and we keep wanting something more.

If you read my last post, you know that it has been a crazy couple of days with broken down cars, chickens in the road and other difficulties.  What I hadn’t written about was Lauren’s show saddle (her only saddle) was destroyed Tuesday night.  She had nothing to show in for Feather’s first show.  I did not have the funds to purchase a new saddle now, but did so we could get to the show.  Things just kept happening to deter us from making the show and I kept pushing on.  I am sort of used to things being difficult.  I had already paid money for the show and we had planned for months for Feather to make her debut at this particular show.

WE WERE GOING TO THE SHOW AND WE WOULD DO WHATEVER WE HAD TO GET IT DONE!

Dumb.  Lauren had lovely first rounds on Thursday.  It was a promise to us that Feather was coming along just as we had planned.  In fact, if anything, she was doing better than we had thought based on her limited time in the ring.  We were excited about Friday’s classes.

Friday morning found Lauren and I stuck at home with a torrential downpour, high winds and rain falling in bucketfuls. We were delayed trying to get to the Equestrian Center and our property was covered in three inches of water.  The storm as it raged, was as bad as any storm in terms of wind and rainfall.  Yet, another omen.  But we waited out the storm and headed to the show.

Immediately upon getting to Feather’s stall I knew we were looking at what would be the last straw in this fragile straw house we were building.  Feather’s back legs were swollen to twice their size.  Her stall full of cowpiles as she obviously had a serious bellyache.  She was dehydrated and obviously not feeling well, we were done.  She is a young horse with lots of shows ahead of her. We did want to mess around with a potential problem-and we could not take any chances jumping her with her legs less than perfect.

I will never know as I gaze at Feather happily eating her feed this morning or her beautiful, slim back legs, if I had been given multiple warnings to walk away from this horse show. She is grazing in the pasture now with Mickey and the new pony, well and content.

I try to do the best I can to persevere no matter the obstacles that are pushed in my path.  Perhaps a good lesson in learning to say when enough is enough would be wise.

2 thoughts on “To Presevere or not”