I did not make the trip to TAMU today for Bruno’s latest six-week check up.  Megan was there to go with Lauren.  But I have felt like I was with them all day.  First, imagining the loading of Bruno (pretty uneventful) and the subsequent release of Kid (he did put on a little rodeo show bucking and cantering around the paddock as the trailer pulled out).

I caught up with Lauren a few times during their almost four-hour long appointment.  First, she reported that Dr. Marsh was quite positive about the way the hoof he had done surgery on looked-or as my friend here in Houston called them “the old hurt hoof” versus the “new hurt hoof”.  Then a couple of hours was devoted to hot shoeing all the hooves (new, old, hurt or not). 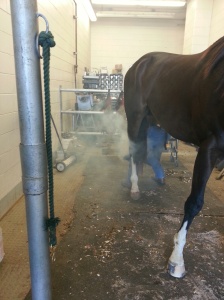 The steam coming up from Bruno’s shoes.

Dr. Marsh decided that the “old hurt hoof” was not growing as straight as he would like so he drilled out a quarter size hole and then filled the opposite side with a substance that will help keep the new growth moving in the right direction (help stabilize the hoof and create less motion in hoof).  (I really am just repeating what the girls told me-I don’t really get the concept of motion in the hoof but we will let that go for now.) 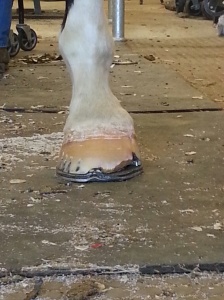 He also looked at the “new hurt hoof” and did some re-stitching on the wound.  He re-iterated how lucky we had been.  Apparently, the cut was not as superficial as our vet had indicated to us (or we did not understand it that way).  Dr. Marsh sent home orders with Lauren that any change in “the new hurt hoof” be communicated immediately.

Wow, I knew it was bad at the time but I guess I just didn’t comprehend how close this latest mis-hap had taken us to never getting Bruno sound again.  You get caught up with the “big” problem and fail to see how another issue can eat your lunch in the meantime. 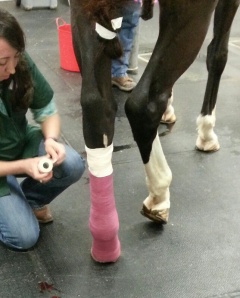 The new-hurt foot being re-sown and ‘casted’.

The bad news-which I was really, really hoping for a change in-is that Bruno is still confined to his stall until at least his next six-week check.  By then he will have been on stall rest for almost 130 days!  I am not aware of a horse that has been on stall rest for that long-I am sure there have been others.  Thank God, I had the foresight to build his extra-large stall or this would be worse punishment than what it is.

The good news-which is extremely good news that I hope comes to pass:  Dr. Marsh feels that after two more six-week shoeings (so, 12 weeks from now) Lauren will be able to get up on this horse’s back and RIDE him.  Just walking to start with-but oh, my goodness, that is amazing!!  We had thought it would be Christmas time again before Bruno would feel that girth tighten around his broad back.

And we can start some walks in the next few weeks, around the arena, around the paddock, but Bruno cannot go loose.  Whatever, it is wonderful news and a testament to this strong OTTB and his great care (both from the vets at Texas A&M and Lauren).

p.s.  The moment I wish I had witnessed at A&M today, was when the vet tech who was helping with case (he wasn’t there when they talked about Bruno and his history) looked up at Bruno’s brand new OTTB halter that Lauren got for her birthday from her sisters and said “Is his name OughtBE”.  I am  pretty sure I would have fallen on the ground laughing and it would not have been nice!