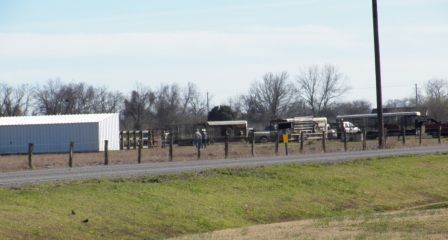 Okay, don’t worry, we did not go over the edge and install a big screen TV for the horse on infinite stall rest (we might if we thought it would cure his boredom and not be broken to bits) but just want to discuss his perspective on life from his stall.

I think it is a great deal like a real life, albeit  circa 1970, television screen that Bruno sees each day from his stall.  He has about 90 degrees of vision from his stall as he has a wall on his left side and one to his back, but he has pretty unlimited vision to front and right side.  Bruno has very few channels to choose from, thus, the circa 1970.  Primarily he watches the “Highway Channel” where hour after hour, day after day, an assortment of vehicles from bicycles (quite frightening) to semi-trucks and tractors rumble by maybe 300 yards in front of his stall.  For added excitement, an occasional horse or cattle trailer rolls by and some even pull into the yard in front of him.  In addition to the “Highway Channel”, he gets the “Mr. Kid Show”-described as the often boring but predictable life of an elderly ex-barrel horse.

Additional channels, with limited availability include “The Man Mowing” channel, the “Cows Across the Road are Moving” channel (another frightening channel), the “What is our Crazy Neighbor Burning, Plowing or Cutting up now” channel, the “Mickey or Feather Get Loose” channel (this does not have a sexually related theme), and finally, the “Special Events” channel.

Yesterday, on the “Special Events” channel, Bruno had a captivating and exciting look at modern-day cow herding.  For the most part the cattle pastured across the road do not do much.  Sometimes, a round bale of hay is dropped off and this causes some frantic activity.  Then a couple of times a year, the calves are culled from the herd and trucked off to another place. 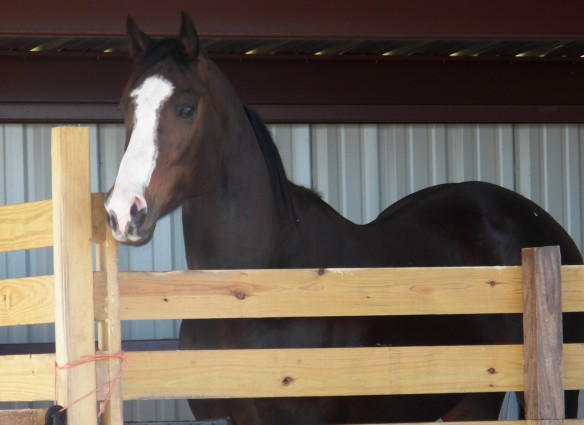 I came out to see Bruno with his head held high and eyes riveted to action in front of him.  No less than five rigs (that’s pick-up trucks with assorted trailers) were pulled into the cow pasture.  Bruno watched the whole ballet unfold from the unloading of ranch horses (already saddled and ready to go-Bruno says he has never had a saddle on in a trailer ever!),  the cutting of the cattle, the roping and the eventual loading of the babies into the trailers to be hauled away.  I don’t know about any other viewers of this special event, but Bruno gave it a 10 for great plot, terrific special effects (he had no idea a horse could dance around a calf that way), and an outstanding sound track (the horse neighing was VERY authentic-the cow mooing mournful and sad). His expression of apt attention should get viewers everywhere to want to tune-in.

It was a very exciting day for television watching and Bruno keeps checking back for more action only to see “The Cows Chewing” program has taken over that network.

Due to poor reception or some technical problem Bruno doesn’t understand, once it gets dark he seems to lose all the channels except the sleeping portion of the “Mr. Kid” show.