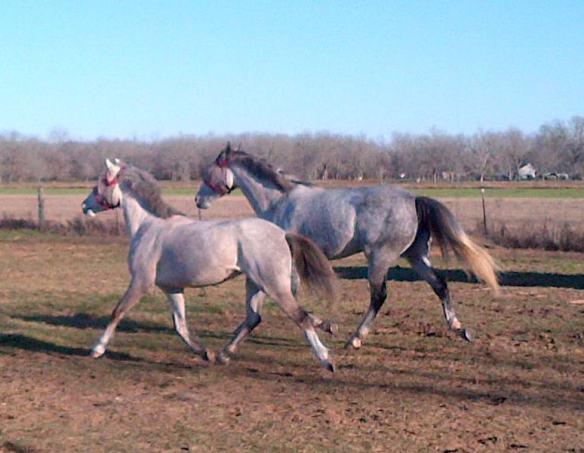 For the last time, the grey girls make their way to the pasture. Mimi’s all-star trot should take her to the big time.

Endings and beginnings are always bittersweet for me.  I love my animals too much to not be emotionally attached to them.  I swear they take a piece of my heart each time they move on.  But I am also convinced that my life with animals is one hundred times richer for their presence.

We have had pony Mimi up for sale.  I knew she would not be one to stay.  She is young and inexperienced and Jordyn, at five, is too young and inexperienced for them to make a show team.  Lauren is too old to show ponies.  Yesterday, two ladies from  Lone Star Sporthorses were coming to take Mimi for a two-week trial.  This is common in the horse world.  If the horse is older, you want to make sure that he is sound and sane when you get him away from his mothership.  But Mimi is young and pretty much, what you see is what you get, so I expect her to stay with this new home.  If she comes home, they didn’t know what a three year-old pony was all about, because she is pretty good one.

Jordyn spent the night on Friday and Lauren was going out-of-town so when we let the horses out on Saturday, we knew it was likely to be the last time Mimi would spend with her best friend Feather.  They trotted happily, blissfully out to the back pasture, caught in a picture in a trot that shows both of their breeding and conformation.  It was Lauren’s last look at the little pony who brought the joy of riding back to her life.  In the uncomplicated world of pony riding, Lauren had re-gained the love of a simple gallop down the fenceline.  She had learned some things from that pony too!  Like, how to growl at a bully and make a horse respect you.

After Lauren left, Jo and I completed our chores.  Jordyn knows the routine and can muck a stall with the best of them.  I told her how her mama used to clean stalls as a teenager to make extra money.  Jordyn just was amazed.  Like as a job, she asked.  I said yes, like a job. Jordyn has her lesson on Saturday morning.  I was stalling a bit because all the horses were way out in the back but as we dumped our wheelbarrow of manure, little Mimi picked up her head and watched us.  We called to her and in she came.  I asked Jo if she wanted to ride Mimi one last time.  Mimi was reacting to cold morning air and was a handful as I saddled her.  I was a little concerned about how this lesson would go.

We went out to the arena and I lunged Mimi first.  She was running, bucking and pulling.  I let her blow off some steam. When I thought she was ready, Jordyn got on, but I did not let loose of lead rope.  But I shouldn’t have worried.  Mimi settled in and gave Jordyn a great last ride.  I let them loose on their own, and they maneuvered over poles, turned and stopped as asked.  In fact, it was the best Jo has ever ridden.  Of course it was.

Ally came with Kendyll a little later.  Kendyll loves to see big Bruno.  He had his head out over the stall and Kendyll would just giggle and laugh whenever he blew his soft breath on her. 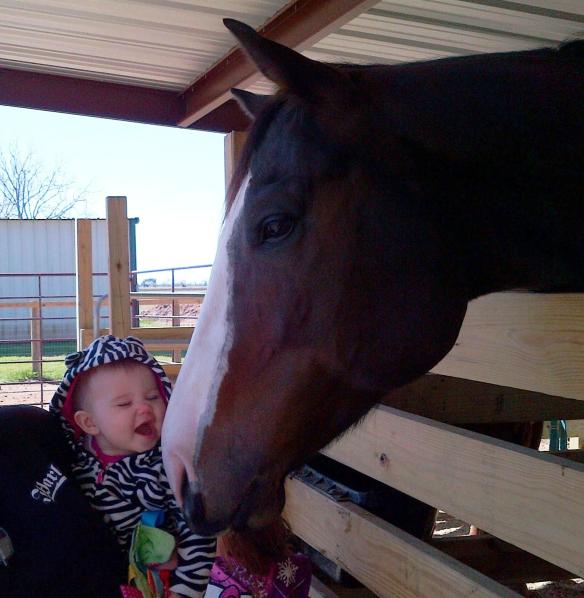 The people for Mimi got here right on time.  I got her from her stall, kissed her little nose, told her to be good and watched her load easily into their trailer. I think she will be a grand pony!  I will keep you up on all her progress.