I am sure this is one of the many swashbuckling kitties under my house last night fighting for the female cat’s affection.

Yesterday, the rain and cold continued in south Texas.  It has been under 50 degrees for several days and I know all of you in the rest of the country do not really consider this a hardship but we do.  Normally, what is left of my cat population since the wild dog attacks earlier this fall, can be seen lounging on my porch, sitting atop Lauren’s jeep or chasing birds at the barn.  We have not seen them since the rain has started.

But starting yesterday morning and continuing through the wee hours of the night, I can tell you where they are now-under my house. 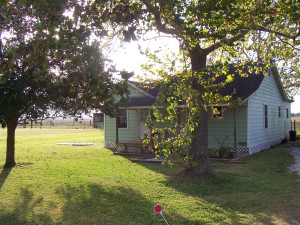 Note how the house is raised off the ground. This allows predators (cats!) to live underneath it.

In some diabolical plot to make me crazy the night before I had to return to work, the feral cats took up residence directly below my bedroom.  I have three unneutered females who must have simultaneously come into heat.  So, the males, not to be left out in the rain, all joined the females in some mass, unrelenting session of love.  The males were busy fighting off each other (and howling with blood curdling meows) and then attacking the females which apparently also required a lot of high-pitched meowing as well.

I was laying in bed trying to read and had the dogs in my room.  The first hour or so of “Cats Gone Wild” was pretty captivating to them.  BrownDog would stand perplexed on the wooden floor while the cats screamed just inches below her.  She even scratched at the floor a few times before going off for a nap.  If my old Doberman Wally had been here, no one would have gotten any rest.  He would have gone insane from the thought of screaming cats below his feet.  But none of these dogs seemed to care very much.

As the evening and then the night progressed, I had visions of the females alternating on a chaise lounge, a cigarette in their paw, while the boys fought each other with laser sharp weapons, smoked cigars, and took the spoils of war.  Just when you thought things had settled down, the pandemonium would begin again.

The only idea I had to stop the cat madness was to get the water hose and spray it under the house, soaking the cats in the process.  But as I said it was under 50 degrees and I just couldn’t make the cats freeze to death.  By midnight, I was unwilling to go outside from my warm bed but no longer cared if the cats froze to death or not. I had visions of the old ice fisherman that cut the round hole in the ice to get to the fish.  I would have cut a hole in my floor and dragged the cats out if I had been able to do so.

Finally, I found some old ear plugs from a trip to Bartlesville (not really sure why they have them in the tunnel from the parking lot to the office building but I picked up a set one day).  From that point on-no more cat shenanigans were heard,  at least by me.  I haven’t talked to Lauren about how her night went. I am deeply prayerful that the cats have concluded their “love time” although it is still cold and raining.  At least I will know when to start looking for new kittens!