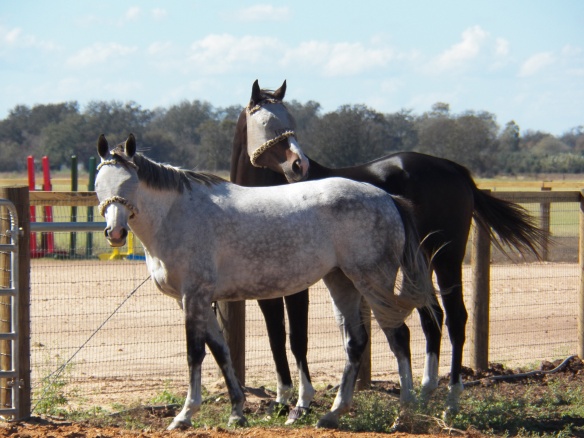 Feather is a big horse. Bruno is huge.

First off,the horses have fly masks on to keep the flys out of their eyes.  They are easier to catch as well.

Yesterday was a super stressful day for me.  I decided to go meet Lauren at the Equestrian Center when she hauled Mickey up for Finals.  Dev was coming from the other direction with Bruno in his trailer and the idea was to move Bruno from Dev’s trailer to ours.

I left my car for Lauren and we waited for Dev to pull in.  I saw Bruno’s head emerge from Dev’s trailer but nothing prepared me for the size of this horse when he stepped out of the trailer. Wow!  My friends keep making fun of me because all I can say is how big he is.  I have owned big horses before.  Cupid was a huge horse.  But something about the way this guy is built just amazes me.  Don’t worry I will have plenty more pictures.

I have turned the pulling of the trailer over to Lauren.  The thought of hauling the new guy home by myself in rush hour Houston traffic was not a good one for me.  Okay, I was pretty freaked out.  Dev promised Bruno would not act like Leo-still I was out of practice and frightened.  Each time I successfully made it down another stretch of road to the next turn off, I gave thanks to God and kept hoping my luck would hold.  When we finally pulled into my place, I was worried about unloading him.  Agility is not my best thing.  Old, previously broken bones, arthritis and hip replacements do not allow you to bound easily in and out of trailer.  I unhooked him, went in to undo the slant and was chaining it back when he simply turned around (not an easy feat for a 17 hand horse inside a horse trailer) and headed out.

I walked him up to my ridiculously small barn and thought, boy, you have come a long way from New York.  I got him settled into Mickey’s stall and thought I was going to put Feather into hers.  I changed my mind when I saw he could simply reach his head over the stall and bite the mare.  I moved her another stall down.

Anyway, the evening settled in.  I had let him out in the paddock and Feather and Kid were on the pasture side.  He started racing up and down the gate.  He is here to re-habbed his hoof and ripping his special shoes off first thing was not a good plan so I let them all go out together.  A little excitement ensued but shortly they were all eating hay together.  They will all be fine.

Today Lauren rode Mickey in two classes as warm-ups for tomorrow.  Her first round at 1.0 meter was just about perfect.  Dev praised it as the best she ever rode.  She came out with a blue ribbon.  Later we tried one class in the ring that will host the finals tomorrow.  It was not as smooth, but still produced a clean round.

Send us some extra prayers if you will as tomorrow dawns and they do their best to pick up a ribbon for the first time in Zone 7 Finals.  Thanks for being with us and riding along!