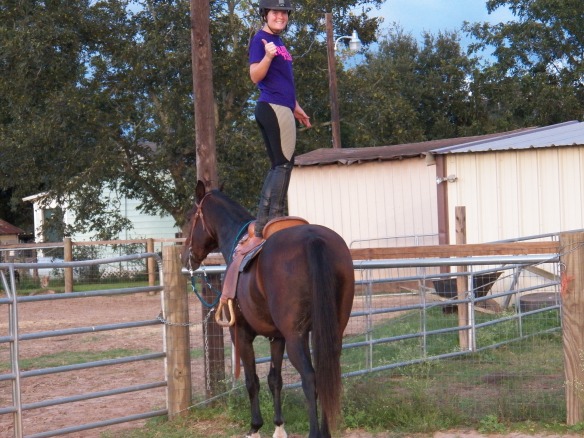 Lauren starting her trick riding career. It was just one of those days.

Yesterday was a relaxed family day.  Lauren and I went and picked up momma.  We met Ally, Luke and the girls at new lunch place.  Mom’s mobility is greatly  restricted.  We were able to park right by the door and get the first table inside the door.  It was nice to just have lunch together.  Mom was a little disappointed that the new restaurant did not have its liquor license yet but enjoyed some good fried catfish and mashed potatoes with excellent cream gravy (nod to my cousin-we were of course south of I-40).

Mom asked if I would call Jay to see if Jim would buy her a dress.  I asked her what she needed a dress for.  She smiled and said “for her wedding”.  Didn’t seem like a good time to tell her she and Jim were already married.  So, instead I asked her what kind of dress she was thinking of and her eyes lit up.  She went on to describe a classic, traditional dress in ivory or pink. Okay, so pink is not so traditional  but it made her happy.

After lunch Lauren and I went out to ride the horses although a cold front had moved through and it was a little chilly (in south Texas under 70 degrees is a little chilly).  For some reason we will never know, as we were walking the horses in from the pasture, I with Mickey, Lauren with Feather, and Mimi  walking freely alongside Lauren,  Mimi suddenly reared and wheeled off to the right catching Lauren squarely in her lower back with her tiny cloven hoof.  Hurt more than a little.  Probably bruised the kidney, can’t wait to explain that to the doctor that already thinks horses are demon animals. Couldn’t happen again if we tried.

Lauren shook it off and we had fun just playing with the horses.  We played follow the leader-Lauren tried to kill me making sharp turns off a series of low jumps.  Then we played barrel racers.  Lauren got on Mickey with the western saddle and got Mickey to revert to his first days as a western pleasure horse.  He was so cute doing a little western jog with his head long and low.

Then as we were leaving the arena, I look over and Lauren is standing on Mickey, after which she proceeds to slid backwards off his rump to the ground. Guess the kidney wasn’t too much of an issue.  Mickey thankfully, played along with all the things Lauren dreamed up.

Later, I pondered Lauren telling me my grey hair was yellowish not grey.  Well water is the culprit as it leaves mineral deposits in the hair.  It is most noticeable in grey (white) or blonde hair.  I decided I would use the horse shampoo we have to whiten our grey (Feather and Mimi) and white (Snowboy) horses.  It seemed like a good idea.  I left the purple colored shampoo on for about ten minutes.  My hair appeared to be whiter and I thought it was a pretty good solution.  Although as the day progressed, I continued to get whiffs of shampoo smell.  I kept thinking Snowboy was stalking me. I kept looking up expecting to see him sitting at one of the cubicles working on a computer.  It was a little disconcerting.