I know, I know, you are sick of the Mickey and Lauren stories but today is truly a landmark day.  Nine years ago today, in 2003, Mickey came from Sarah’s horse rescue to the Diamond C Training Center in Sugar Land, Texas to be Lauren’s horse.

We already owned Kid and were boarding him at the same place.  Kid was Ally’s and my horse and too spirited for Lauren.  Plus, Kid and arenas (from all his days of rodeo) were not a good combination.  Kid did not want to go through the alley way or through the arena gate.  Lauren needed and deserved her own horse.  Mickey was not her first horse-as she had one in Florida- but he was her first Texas horse and she was old enough to understand the privilege of having him.  Lauren had just gone to Dianne’s English Summer Camp at Whipple Tree Farm and was anxious to have a horse that could jump and go to horse shows.

Mickey was born in 1998 in Bartlesville, Oklahoma to the Herman family.  He was given the APHA registered name of “Irish Midnight” as their son Robie (and Mickey’s official owner at birth) was at Notre Dame (Fighting Irish) and he was born at… you guessed it, midnight. 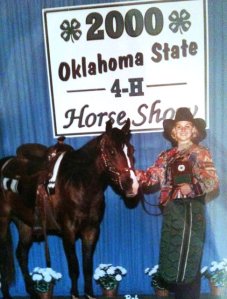 Plus he was a dark (dark as midnight) bay, solid colored, colt born to two loud paint parents.  His first love was Kodi, Robie’s little sister still at home on the farm.  Kodi helped break and train the colt and even showed him as a two-year old in Oklahoma State Fair Western Futurity.

Things changed with Kodi and Mickey (medical issues) and Mickey ended up at a barn in Houston, Texas.  Apparently, this was when it was determined that the little gelding liked to jump.  A series of mis-adventures later, Mickey ended up with Sarah at the horse rescue.  He was not in good shape or spirits.  It took a few weeks, for Mickey to come around to even allowing young Sarah to ride him in any direction but backwards.  He would only back up and stand still.  Finally, he started moving ahead and we saw potential with him.  Certainly, it was not perfect.  He was young (Feather’s age now), stubborn, wouldn’t let you bridle him (old infection in his ear), didn’t like to load in the trailer and was prone to laziness, but he liked to jump.

While Lauren continued to learn to ride better and basic jumping, Dianne’s daughter Chelsie, at Whipple Tree, showed Mickey in the Junior Adult division.  Their first season together, Mick and Chelsie won the division for the year.  It was amazing time. At John deLeyer’s farm, the last show of season, and they had to hold on to the points they had, plus win some more to win the season.  I think Chelsie got three first places with Mickey that day.  I had a bottle of champagne and we all  toasted Chelsie’s and Mickey’s victory.  Secretly, I knew Lauren could not wait until she was jumping the ‘big’ jumps with Mick.

And they grew and learned together.  Lauren had some rough years through middle school and Mickey was always there as her confidante and friend.  They progressed through the show ranks slowly, the victories not coming easily, but Lauren persisted in wanting to ride her boy.  As they both matured, they moved on to the rated shows, first in the hunter division that gave them mileage in the ring if not success and the past few years to jumpers where Mickey proved somethings we had never guessed about him-that he was blazing fast, could turn on a dime and was super careful over jumps. Here is his 2011 Zone 7 Jump off double clear round.  He ended up 12th that day.  http://www.youtube.com/watch?v=Dc3kn8i0jQk&list=FLL__kl0_aWNKe4VkaZJ715w&index=3&feature=plpp_video

Lauren and Mickey, they both have their imperfections, both have their opinions but both have worked hard and long to persevere in an industry that is not kind to amateurs and rescue horses.  I am proud of both of them on this nine-year anniversary that Lauren has stuck by her choice.  I think she has learned about loyalty, dedication and the value of hard, physical work.  I think Mickey got himself a pretty special girl as well.

1 thought on “Mickey and Lauren”