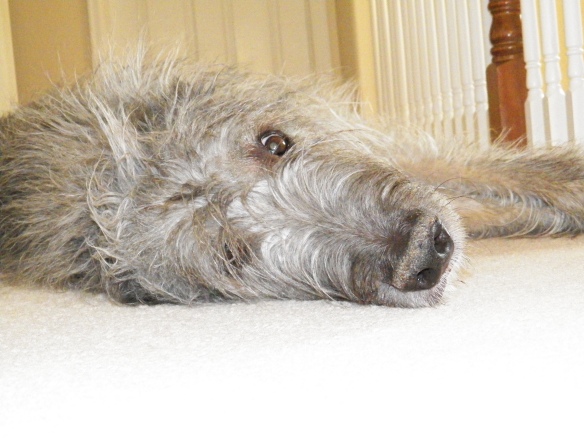 Miller resting on the stair landing-may he rest now in peace.

When you love an animal, a horse, a dog or a cat you immediately open your heart to hurt-because that animal is not (under normal circumstances) going to out live you. The promise of love is the promise is sorrow.  And so it goes.

My son-in-law Ryan was a little child with a big heart condition that necessitated numerous difficult heart surgeries.  I can’t imagine the frightened state his dear mother (and father) must have lived with-never knowing if their child would grow old at all.  There were many rough years.  I do not know if it was because of this delicate balance of Ryan’s life- if it influenced if there were pets in their house or not, but Ryan never had a dog or cat growing up.

In what is my belief only, I am surmising this from limited facts, I think once it became clear that Ryan had a shot at being well, he ran at life full throttle.  He became an adept snow skier.  He took the bumps and hits on the soccer field.  He took chances.  He had looked at death and now he was living life.  Or maybe a little, sick boy grew into a strong, tough man-I do not know.  But the Ryan I first met, who was dating my daughter Amber in 2005, was a joy.

He wanted to get a dog.  I loved getting dogs.  He wanted a big dog and they had talked of Great Danes.  I told him if you want a big dog in Colorado, get an Irish Wolfhound.  Bigger than the Dane with more coat and better able to withstand the Colorado winters, the Wolfhound was big, majestic and gentle.  In my version of go big or go home, I talked Ryan into the attributes of Wolfhound.

Now, normally even if you wanted a Wolfhound, they were not so easy to come by.  But that spring weekend of 2005, there was an ad in the Denver Post for Irish Wolfhound puppies.  Amber, Ryan and I drove to mountains to a small breeder to see her pups.  Ryan fell in love with brindle with a white tip on his tail.  He was constantly causing the most trouble and Ryan applauded that.  Although this was Ryan’s first time to see the breed, I think it was love at first sight.  The male puppy was purchased and named Miller.

Although less than six months old, this puppy was already 45 pounds.  And he grew fast.  Amber was living in small apartment at the time with a cocker spaniel of her own.  Miller joined the group.

There are countless pictures of Miller and Ryan-their first hike, the first time in the deep snow, the first mountain lake, and many just from the park in town.  Miller came to my home in Sugar Land that first summer.  After that long distance trips were a little difficult due to his huge size.  Full grown, he was almost seven feet from his nose to end of tail and almost 150 pounds.

And there were ups and downs, as any new dog owner would have, cushions eaten, dry wall chewed, the bannister used as a teething toy, oh, yes, all the stuff normal pups do but done by what was quickly becoming a huge dog.  Ryan did a good job in training him.  When they are that big, they must obey.  Still I remember Amber being concerned about walking a dog that was quickly starting to outweigh her in the slippery snow the winter of her first pregnancy.

I remember their first home together had a big picture window in front.  When the UPS man came up the walk, what a terrifying picture he saw and heard.  The bark of an Irish Wolfhound comes from deep in his chest and resonates on the way out.  WOOF-never sounded like this before.

Amber found that Miller instinctively knew when Ryan would be out-of-town and changed his habits from house dog to guard dog in Ryan’s absence.  He would patrol the hallways, ever alert for intruders or dangers.  With Ryan traveling for work, it eased my mind to know Miller was on the job.  But make no mistake about it-Miller for all the love he might have for Amber was Ryan’s dog.  First and foremost.

When Ryan came through the door, Miller was overjoyed and gave Ryan his special love and attention.  I think that Ryan could not have picked better or found a more special “first dog” than Miller.

If I am grateful for anything, I am grateful Riley and Jo did not see what happened shortly after we left.  With Amber, Ally, Ryan and the babies busy out back setting up for the party, the bouncy house woman arrived and rang the door bell.  Miller from his perch at the top of stairs came hurtling down in full guard mode.  In his hurried path down the stairs, Miller, a dog not known for his grace and agility, took a bad turn.

In horror, Amber and Ryan gazed upon an obvious compound fracture of Miller’s leg with blood pouring from the site.  No more needs to be said.  Somehow, Ryan carried the huge agonized dog to the bed of his truck while Amber sped them off to the vet.  They left him for x-rays and waited to hear a prognosis.

With 40 people scheduled to attend a party mere hours away, the vet called and described a spiral fracture, compound in nature.  Surgery was a possibility but with Miller already seven-years old, and not an ideal candidate under the best of circumstances, it was ruled out.  So was amputation of the leg, another suggestion by the vet.  This big guy had issues maneuvering around on four legs much less three.  Also, the pain and adaptation time would be nuts.  There really was no decision to make.  Still we sobbed as Amber told the vet, they would be there in a few minutes to be with him as he left our world.

I understand and have discussed at length that there are humans dying every day.  Horrible deaths.  I mourn those as well.  But these animals, they steal our hearts and then they break them and while not equating a human death to an animal death, I know the brutal pain of their loss.

And the loss of your first dog, is one of the hardest.  The pain is the sharpest, I think it comes upon you unexpectedly.  I know men who have never cried, sob relentlessly when faced with the death of their “best-friend”.    I do not understand why these things happen as they do.  This horrible ending on such a wonderful day of birthday joy.  I have cried so hard, so many times this weekend.  But to my son-in-law, Ryan, I can only say, you hurt so bad because you loved so deeply.  And in the end, we cannot be afraid of the love even knowing the pain that will come with the end.

Ryan, hold tight to the memories of your big man running through the snow and along the mountain paths.  Give thanks for the time you had.  We will miss you dear Miller.