Funny how things in life line up and change your direction.  While we await the lab work for Mickey, we are leaving him on a light work schedule.  In fact, I should go out tonight (it’s Sunday) and give him a few turns around  the arena.  He needs some time under saddle even if it’s just to walk and trot.  Not sure I will, as Sundays tend to freak me out a bit.  I get overwhelmed with the week ahead and want to be in the  house, clean and ready for bed at an early hour. Tonight this will be more the case as Lauren is off to spend the night in Galveston.  I will have all chores to do and will need to get up even earlier tomorrow morning to get the horses fed, give them time to eat and get them out before my 5:30 a.m. departure.  I bet you are wishing you were me, huh?

We had planned for Mickey to have a lesson with Dev on Friday.  We have a schooling show coming up in mid-August and wanted to get Mickey sharp before the show. We do not jump Mickey except at lessons (maybe once a quarter) or at shows.  Tends to keep him fresh and his legs young.  Now he is sidelined with respiratory issues.  You just try your best.

Since Mickey was out of the lesson rotation, Feather had an opportunity to step up.  We had wanted to get her to training with Dev earlier this summer but all you loyal readers know, she refused to load in the trailer and now weeks later (and trailer ready) here we are.  Dev has only seen the mare once in late winter not too long after we got her.  I was anxious for Dev to see her again, see her work and see her jump.  I was like a kid waiting for Christmas.

Several things led to the lesson actually taking place at Caroline’s compound instead of Dev’s.  It meant a much shorter trailer ride for us and with temperatures over 98 degrees that was a good thing.  Still we got to Caroline’s around noon and unloaded Feather to find her covered in sweat.  We started off with a wet horse and I think she finally dried off and cooled down sometime late that afternoon after we returned home.

Caroline on Mariah, Arianna on Ellie Mae and Lauren on Feather were all in the arena when Dev pulled up.  As he first watched Feather work he commented that she had put on weight and muscle.  He also said she looked more refined.  The Irish Sport Horse is a product of the old Irish Draught horses (think big, stocky horse pulling the beer wagon).  When Feather first came, her head seemed unproportionately big for her body.  I remember showing Dev’s dad (a great horseman in his own right) a picture of Feather.  Never one to mince words, he told me, well, maybe she will grow into that head.  So apparently she has.

As Feather continued to work it seemed she got more and more compliments from Dev, or maybe I was just receptive to them. For her age, she does have a gentle, easy temperament.  Going to horse shows means seeing new places and new things without fuss.  Feather had come to Caroline’s and just set about doing what Lauren asked of her.  If anything, she was a little lazy.  I will take a lazy young horse over a crazy young horse any day. 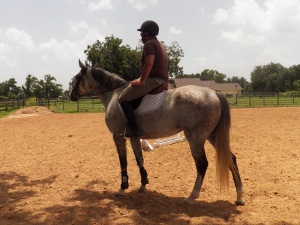 Dev on Feather quietly looking over the arena

Dev got on Feather to see what Lauren was dealing with and to try out the mare’s responsiveness.  She worked quietly and well for him.  Then it was Lauren back in the saddle and time to jump.  Ultimately, to do well in a show, a horse must learn to navigate a series of jumps.  While one jump may be brilliant, the horse must jump up to 12 jumps, executing turns, bending lines, tight corners and difficult distances (those set to challenge the horse’s ability to change up their natural pace).  Except for one time when we did a three jump line at home, Feather had never jumped more than one jump.

I was ready to see the mare actually go through a few jumps and see how she did.  While my picture taking skills were off, I would like to say that I had a great video of Feather over multiple jumps that Lauren accidently deleted.  At least I didn’t delete the pictures-I just didn’t get good ones.  Here you can see her at the downhill side of the jump.  It was 2’9″ and the standards (the posts of the jumps) are five feet so you can see she is clearing it by a couple of feet.  The first time to put two jumps together, Feather jumped the first jump well and Lauren cantered her to the next across the arena.  Feather stopped right in front of the jump, looking at us as if to say, “who put this here”.  But after she saw the jump she jumped it consistently and competently.

I think she will do well after a tune-up at Dev’s.  We are working toward the next schooling show coming up in August.  It was great to hear all the positive comments and see some of the work is paying off for her!