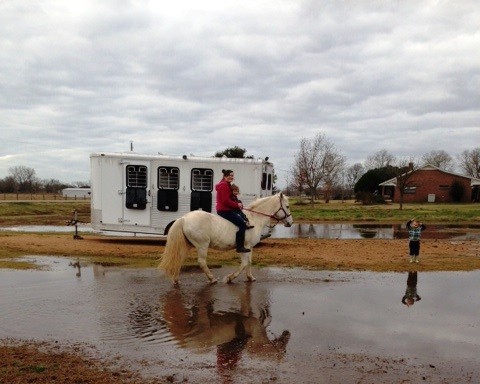 Amber, Ryan and kids, Riley and Lexi arrived on Thursday to rain and overcast skies, but as they had left a very cold Colorado and we had come up above freezing for the first time in days, we were all okay with the overcast skies.  It didn’t take long to throw a halter on Snowboy and head out of the barn to the only semi-dry spots.  Two year old Lexi, showed no hesitation about climbing on board and off she went trotting with Aunt Lauren across the water and around the trailer.  It wasn’t long before her four year-old brother, Riley switched spots with her.

While we got a short video of them trotting we warned them not to show Jordyn.  She would be mad they were on her horse and that they were TROTTING.  Sometimes, you just have to let other’s accomplishments serve as a way to motivate you, but more about that in a minute!

Friday the kids helped out around the barn, filling water troughs, raking hay and mucking stalls.  The rain had stopped, things were still wet but with 70 degrees showing on the thermometer, it was a pretty great day to be outside.  I enjoyed getting to know my grandkids a little better and had a lot of fun watching Kona have so many people to throw his ball.  Jordyn got out of school a little early so that she, Ally, Luke and baby Kendyll could join us for Texas barbecue. Luke got busy digging some ditches to let our water flow out to the ditch.  It started to recede immediately, it was like we were in the Peace Corps or something!

I got Ally to go with me, later in the day, as we took all the great-grandkids to my mom’s.  From the minute we got there, she was overjoyed to see the children.  It is unclear that she realized they were any kin to her but she loved them, nonetheless.  It was nearing dinner time for her and the kids helped her get on her make-up and do her hair.  Jordyn always loves this part of the visit and I think momma loves the attention.  Jordyn, in an overdrive teacher mode with her young cousins, explained how to put on blush, eye shadow and lipstick.  I think little Lexi made sure she had all the same make-up her Granny-Nanny did! 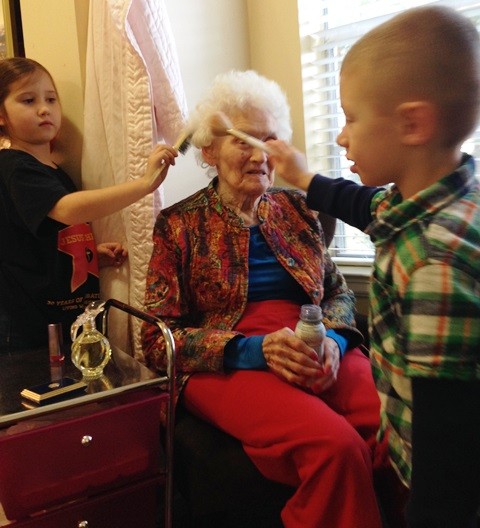 Jordyn and Riley getting their great grandma all fixed up for dinner.

I think the sweetest thing was as we left momma’s room to head down to dinner, with no prompting, tiny Lexi walked up and took her great grandma’s hand in hers and walked down the hall with her. 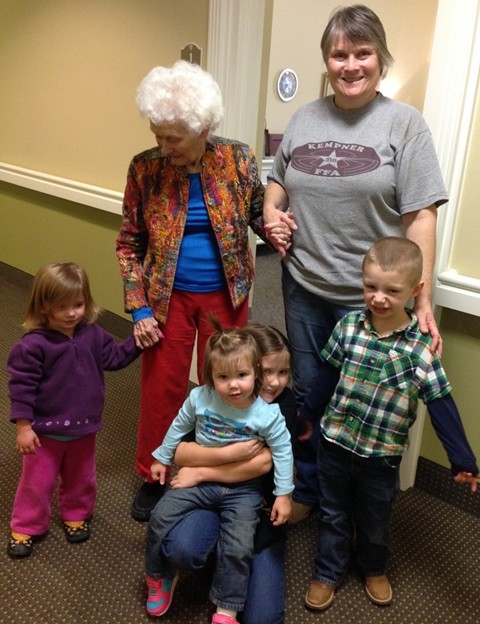 There were lots of hugs and kisses from all the kids.  I wish they could visit her more often as it made her so happy!

Saturday, another warm day, was spent taking great professional photos with Ally’s friend Elvia.  Ryan got roped into going with Lauren and I to get 12 bales of alfalfa hay.  Amber couldn’t understand why it took us so long to go get hay across town, but there is a certain period devoted to visiting with the hay man that has to take place.  It is not as simple as backing in and loading the hay.  We appreciated Ryan’s help.

We got Snowboy out again, saddled up this time, and everyone had helmets on.  Jordyn was determined not to be out done by her cousins.  I took them toward the road, then I let Snowney’s bridle go and headed him to the barn.  IMAGINE this-he trotted in a straight line right back to the gate and Jordyn was TROTTING BY HERSELF! She demanded to do it over and over.  It was a pretty big milestone until Kona ran after Snow, nipped him in the ankle and Snow headed trotting off to the neighbors with Jordyn screaming.  But she tried it again and successfully trotted alone to end the day.

Here is her trotting video-

I hated seeing the kids (all of them) leave on Sunday.  I feel I miss so much with them being so far away.  Hopefully, this time Lexi will remember a little about grandma’s and Riley will build on his memories.