Leo has never been a great trailer rider.  The day we bought him, we had to stop for gas on the way home and he was kicking away as the trailer stood still.  When we were moving he seemed okay.

Since then we learned that Leo preferred company in his trailer riding and if we did not stop for food or gas and kept moving, he did okay.  Never great, but alright.

Once when Lauren was headed to her trainers, a 200 mile round trip, she had both Mickey and Leo.  Houston highways are congested at best.  She hit the tail end of rush hour traffic and was just sitting, moving slowly along.  A huge trash truck came alongside and honked.  Lauren could feel the trailer start to rock as Leo kicked and thrashed.  By the time she got to Dev’s, he had kicked through the rubber matting and had made serious headway to kicking all the way through the aluminum sides of the trailer to the outside shell.

Since then, we have tried Leo in various different positions (there are three slants {slots} in the trailer) and started giving Leo some medicine to hopefully help him cope.  Leo is an off-the-track thoroughbred so who knows where all he has been hauled and under what conditions.  I would bet now that there was a trailer accident in his past.

So, Lauren took Leo (alone) to the show on Friday.  He appeared (and felt) like he handled it pretty well.  No damage to the trailer was apparent.  He was calm and cool when he arrived. We marked it down as good progress and were encouraged.  At the show, he got through two of his three rounds successfully.  He was jumping and moving much better. He ribboned in one class and was just out of the ribbons in the first class.   It was hot and the classes were big so it had been a long morning.  He should have been tired and ready to go home.

He wasn’t!  While he got right in, before we could even get out of the Eq Center, he was rocking the trailer back and forth.  We couldn’t imagine what he was doing.  We heard banging.  We felt jarring movement like we were running on flat tires.  It was horrible.  At the first opportunity we pulled over and I made the decision to ride in the trailer with Leo.  I grabbed my phone and water bottle.  Wanting to be stopped as little time as possible we ran to back of the trailer, opened the door, and I scrambled up inside.  Lauren locked me in and took off down the highway.

What can I say to convey the first ten minutes of riding with a huge (16.3 hands and 1300 pounds), thrashing, pawing, kicking, crazy beast?  It was terrifying!!  We had left the slants open thinking he would like the extra room.  Immediately, I decided that was a bad idea.  He couldn’t maintain his balance; he was sliding and then bracing himself against the next jarring move of the trailer.  I got the slant closed so he was isolated in slot about seven feet long by three feet wide and seven feet high. I couldn’t get up by his head, the slant blocked it off so I stood at his rear, petting him and alternatingly yelling and soothing him.  Nothing worked.

His head was shaking vigorously up and down (always just short of hitting the top of the trailer). His front feet were pawing.  His back feet were kicking.  He would work himself up to a point where he would start sliding down the wall of the trailer.  I was terrified he would slip to the ground and we would both die.  Of course, there was moist manure to make it more slippery (and smelly).

I tried singing.  Thought it might soothe him.  I sang “Thank God, I’m a Country Boy (John Denver), the “Star Spangled Banner” and numerous verses of “Row, Row Your Boat”.  He was unimpressed. After awhile, I caught on to move my arm from the bended elbow position I had it in, when he moved suddenly and smashed my arm into the back of the trailer.  Likewise, I moved my legs about a foot away from the slant and leaned in when I realized one of his kicks would shatter my leg to pieces.

I had told Lauren to call every 15 minutes or so, to be sure everything was okay.  Great plan, but hard to execute as the big horse had me fully engaged in trying to keep him calm.  But I had to answer so she would know we were still alive.  She told me later she had a vision of opening the trailer door to find me trapped under Leo’s dead body with just my feet sticking out like the wicked witch of the west.   Thankfully, we missed out on that.  About 20 minutes into the ride, I started looking out for other trailers.  Did other horses stand quietly in the trailer?  The ones I saw did.  It is crazy noisy and rough.  No shock absorbers back there.  Everything was banging and clanging over every line in the highway.  I cannot tell you how it must seem to these animals to have trucks, motorcycles, trains, and all types of motor vehicles whipping by your windows as you stand trapped in a metal box bouncing down the road.

It became apparent that nothing I was going to do made any difference so I settled in for the ride. I leaned up against the slant, sang my songs, kept my hand on his butt and prayed.  It was 50 miles of road ahead and temperatures over 90 degrees.  Funny, I don’t remember the heat at all.  Wow.

At one point, Lauren moved to the left lane to pass a truck on the right.  The trucker was not going to give way.  Leo freaked the entire time.  It was like the truck was coming in the window to land on him and he was panicked.  It was the worst possible time.  When we got past the truck, I called Lauren and told her under no circumstances could she pass anyone on the left again.  I had to wonder if Leo had been in a serious trailering accident.  I was stunned that he even got in a trailer with how bad he did with the ride.

By the time we got home, I know I was exhausted (my legs hurt from being braced against the wall), my shoulder (three surgeries in the last four years) was aching and emotionally I had it.  I couldn’t imagine how Leo felt.  He was soaked in sweat, breathing hard and wild-eyed. Lauren released me from the locked trailer.  I thought Leo would need electro-lytes (because he had sweat so much), a hose-down to get his body temp down and maybe a tranquilizer gun.  I staggered out of the trailer.  Leo hurriedly backed out.  Leo went to paddock, enjoyed his cool hose down and took off to the pasture like nothing had even happened.

I don’t know if he is this bad all the time (God, I hope not).  I don’t know if I should look for a home for him where he doesn’t have to be trailered or go to shows.  I am not sure what happened or what will happen next time he rides.  But I will never forget riding shotgun with Leo as long as I live. 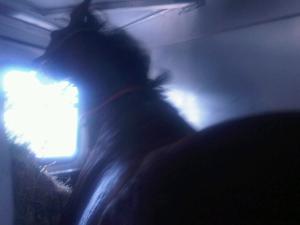 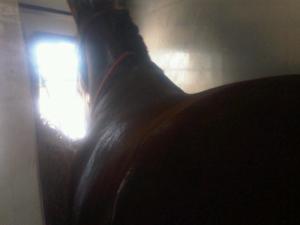 My view from the rear of the slant as Leo’s is momentarily quiet.